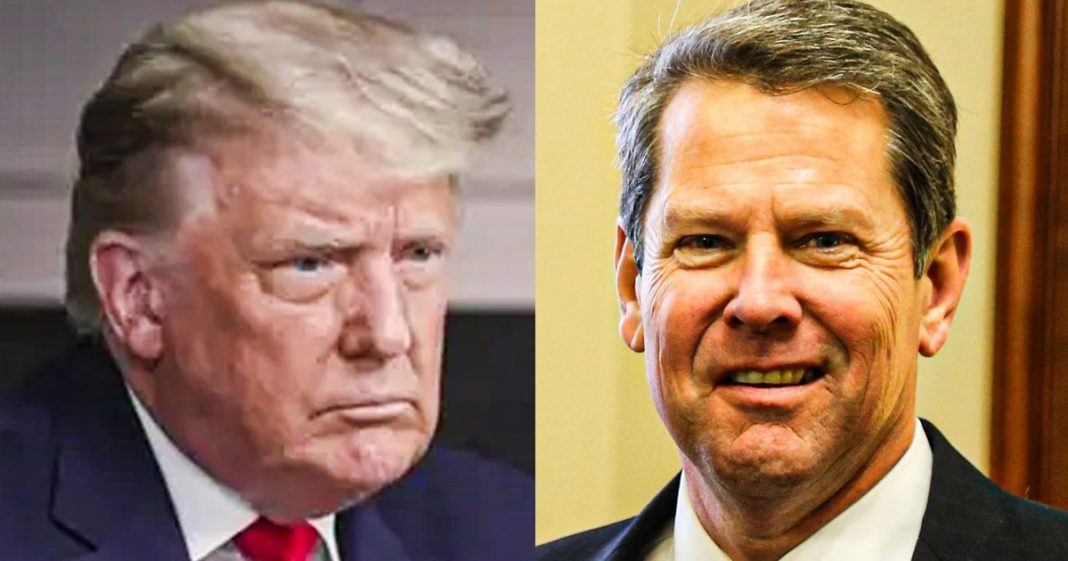 The office of Brian Kemp, the Republican governor of Georgia, announced on Monday that they would not be breaking the law in order to help Trump win the state. According to Georgia’s laws, it is illegal for the governor to interfere with elections, and any attempt by the Governor to secure the state for Trump would absolutely be considered interference. Trump lost, and it is time for his followers to accept that. Ring of Fire’s Farron Cousins discusses this.

On Monday, the office of Georgia’s Republican governor, Brian Kemp issued a statement to Donald Trump who has repeatedly called on Kemp to override his Republican secretary of state and demand a ballot signature match audit before the state. Uh, something that by the way is not even possible. I’ll get to that in a moment, but either way, Brian Kemp’s office, tired of Trump telling him to do these things, issued a statement on Monday that said, we are not going to break the law in order to allow you to steal the state of Georgia. What they’re specifically referring to is the fact that in Georgia, it is illegal for the governor to interfere in state Elections, black and white. He cannot do what Trump has asking him to do, because it would be illegal. But here’s the thing. This was not Brian Kemp’s office, standing up to Trump and saying, heck no, we’re not going to do this. The votes are in. You’re done, buddy. No, look a little further into the statement. They said a Georgia law prohibits the governor from interfering in elections. The secretary of state who is an elected constitutional officer has oversight of elections. That can’t be overwritten by executive order.

Oh, You just threw Brad RAF. Hansberger the Republican secretary of state of Georgia Under the bus because, Okay, we’re not going to break the law to do this. Besides we, you know, it’s he, he has all the power. We got nothing. We can’t do anything. Plus it’s illegal. If we wanted to do anything. So you got your issues with raffinose burger over here. This is ridiculous. You know, Brian Kemp actually had the opportunity. First of all, dude, sitting in a stolen governor’s mansion right now, Stacey Abrams should be sitting there, not him, but when he was secretary of state, he got to help purge enough voters to win him the office of the governor. So he’s there and he still refuses to stand up to Donald Trump, even as Donald Trump repeatedly attacks him on social media and interviews everywhere. The man has an opportunity. He is trashing Brian Kemp and Kemp stands up bravely and says, Oh, the other guy did it. Sorry.

I can help you take it up with raffles burger. No, this is ridiculous. This is absolutely [inaudible]. Look, as I mentioned her, What they’re wanting to do is a ballot signature match Audit, But the signature’s not on the ballots signatures on the envelope. Most of the envelopes, since the recount is already completed. And once again, prove that Biden one, uh, They can’t do that. It’s Physically impossible to do with Donald. Trump is asking them to do right now. And again, they need to do it. The state was close enough to trigger an automatic recount, which they did. Trump’s people were there. They got to oversee it. And regardless of what Trump says, the state is being run by Republicans. If they could have rigged it for you, don’t you think they would have done that? It wouldn’t be the first time that these individuals have rigged a Georgia election.

And by reg, I mean, yeah, they, they purged all these people off the rolls back in, uh, was a 2018. When Kim first one is office over Stacey Abrams, they could have done that. They didn’t, they tried it wasn’t successful enough either way, no matter which way you slice it, no matter what kind of statements Kim puts out, no matter what kind of propaganda Trump’s spews, it is over in the state of Georgia. There’s nothing Kim can do. There’s nothing Trump can do. And there’s nothing that Brad RAF Hansberger is willing to do. Cause the recount has concluded. And once again, Trump lost Georgia is now lost Georgia twice. Can’t help, but think that he wants to lose it a third time, but even then still won’t change the outcome of this election.