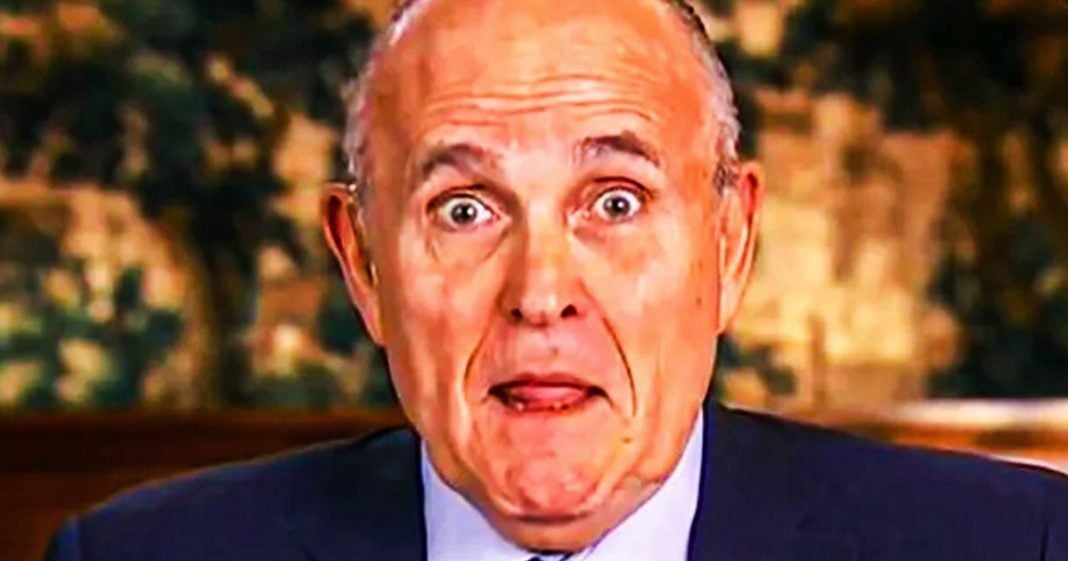 Lawyers for the Donald Trump campaign – the ones who aren’t going to court and saying that there was widespread fraud – have become openly mocking Rudy Giuliani and what they are calling the “clown car” of lawyers that he has assembled. They are calling Giuliani himself “deranged”, and they understand that there is no evidence to back up any of these claims. Ring of Fire’s Farron Cousins explains what’s happening.

According to a report from the Washington post over the weekend, uh, lawyers with both the Trump campaign and the Republican national committee are openly mocking Rudy Giuliani, and his quest to somehow overturn the results of the 2020 election with his farcical lawsuits that he continues to file on behalf of Donald Trump. Now, here’s the thing. Back in early November, you had real lawyers working on these cases. Um, they thought it would help them. They quickly realize that, Oh my God, this is making us look like fools. So one by one, they started abandoning the Trump campaign. Now Trump’s campaign also had actual lawyers on it, staff, uh, people that, you know, they’re a little iffy, but you know, at the end of the day, I guess they’re not all as bad as Rudy Giuliani. And around this same time, they started to look at these lawsuits and realize these have no chance of succeeding because there is no evidence.

It was around this time that Rudy Giuliani was appointed the head guy leader, uh, of these lawyers. And they began according to this report from the Washington post to distance themselves from Rudy Giuliani, because they all thought he was crazy. In fact, they referred to him as deranged. Uh, this is from business insider talking about this report. It says, uh, some attorneys described Giuliani as seeming deranged. Uh, one senior administration official was scathing about Giuliani strategy. Quote, just roll everybody up who was willing to do it into a clown car. And when it’s time for press conference, roll them out. That’s how they characterized it to the Washington post. So Giuliani is deranged. According to these individuals, these lawyers working for Trump and the Republican party, and he’s filled up a clown car with other lawyers slash witnesses slash people. Well, who were going to somehow make the case.

And what’s hilarious too, is to see individuals online, right? You have Republicans, you know, big and small people, you know, who, who have actual positions of power within the Republican apparatus. And you have your average everyday Joe Republican voters, who keeps saying, Oh, but there’s affidavits. These affidavits. These people have said, they’ve seen these things. Uh, these people have heard things from other individuals allegedly. And a lot these affidavits y’all are talking about have already been rescinded, or if they’ve been proven false or they’ve been thrown out because somebody saying something is not evidence. If you cannot provide evidence to back it up, it will not stand in court. I don’t know how many more times I have to say, but I’m getting real sick of it. I’m getting real sick of everybody insisting that this is still a thing that has a chance Trump’s own.

Other lawyers don’t think it has a chance. Trump himself doesn’t think it has a chance. Do you think this man will be planning on holding a rally during Biden’s inauguration? If he didn’t think there was going to be an inauguration for Biden, if he thought he was going to win this thing, he wouldn’t be planning anything like this. If he thought he was still going to be president, he wouldn’t be starting all this crap with Iran right now. But he is, he knows he has done the only people who don’t are the dimwits on the right. And the panic stricken people on the left who still have PTSD from the last four years. Get over it. Everybody it’s over. It’s done with Rudy Giuliani, leading the charge. If somehow he ends up overturning the results of the 2020 election. That I guess at that point we can safely say we deserve whatever happens to us. If we let Rudy Giuliani and his quote, deranged clown car overturn the votes, then yeah, we deserve another four years of Trump at that point. But it ain’t going to happen. Giuliani is not that competent. And Trump and the rest of his legal team know it.