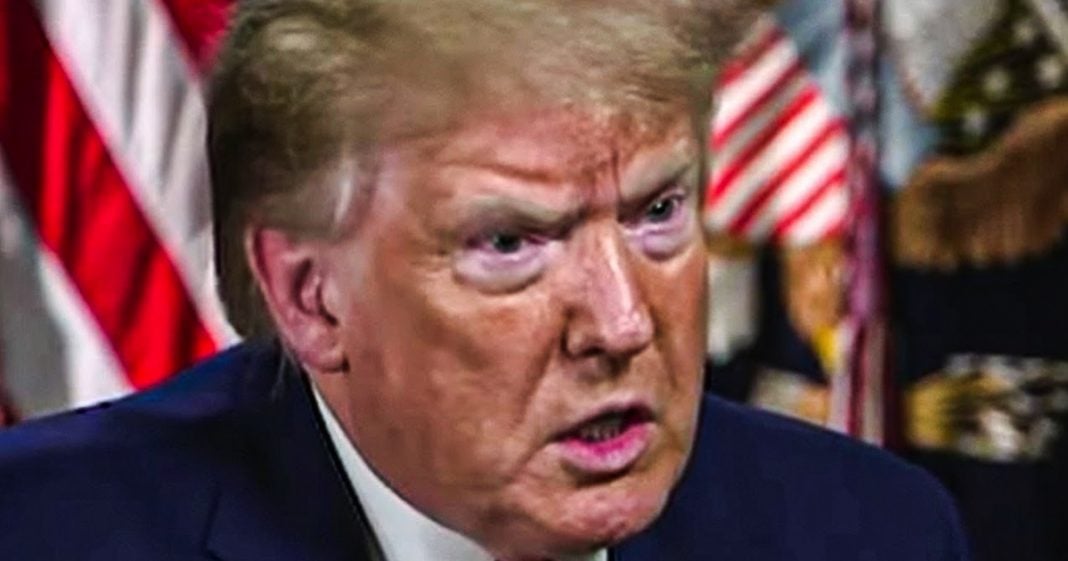 During his ridiculous interview with Fox News host Maria Bartiromo that aired on Sunday, Donald Trump expressed his anger and frustration at the FBI for not being willing to step in and help him steal the election. It is obvious at this point that Trump genuinely thought the rest of the government was going to help him undermine the Constitution and the will of the people, but so far he hasn’t found any group willing to do so. Ring of Fire’s Farron Cousins discusses this.

During Donald Trump’s deranged interview with Maria Bartiromo from Fox business channel over the weekend. Uh, it was revealed that Trump is furious about the fact that the FBI and the justice department are not stepping in to help him overturn the results of the 2020 election. And he even suggested that maybe they’re in on it. Maybe this is the deep state coming out to, to finally take him out. Uh, here’s a couple quotes from Trump. Why isn’t the FBI all over the place? They’re not, they’re not, and it’s a terrible thing. Can’t tell you where they are. I ask if they’re looking at it, everyone says, yes, they are. I know FBI. And it’s great at the level we talk about, uh, it’s inconceivable. You’d think this is the biggest thing they could look at. They just move on. They’ve been there a long time. Some have served many presidents. All I can say is no one has come to me and said, the FBI has nabbed. The FBI is looking at dominion.

That’s so sad. See this isn’t just about Trump wanting to steal the election. He knows he can’t do it. I think he knows he can’t do it. Maybe he thinks he can. But this is about a president who honest to God believes that every single person in the federal government works to serve him, not works to serve the country, works to serve him. And that’s the problem. And remember when everybody freaked out, right? When bill BARR issued that memo, that said, if there is credible evidence of voter fraud, you can investigate in every set. Oh my God, bill BARR has got the DOJ involved. And it turns out that was actually always the policy of the DOJ.

Like he literally didn’t give them any new orders. That’s already what they have. They have an office that actually does those kinds of things. Folks, Trump can try all he wants what we’re seeing right now. Believe it or not is that these institutions, even though he has weakened them and he has packed them with his loyalists, the institutions are holding. Now. That’s quite shocking. Isn’t it? I wouldn’t have expected this, but they are. If Trump had completely captured the DOJ or the FBI, they would absolutely be out there doing these things that he’s saying they should be doing. Now, maybe this is happening behind now. What? I’m not even going to throw that out there because it’s not. It’s simply isn’t these groups that Donald Trump spent four years trying to dismantle, trying to create a new thing that only serves him. It failed like every other aspect of his presidency.

Oh, sure. Have protected him. Many times. They have probably kept him out of jail. They probably kept him from actually being indicted and removed from office. Absolutely. But when it comes to keeping him in power, they’re a lot more limited than a lot of people thought he wants these institutions to go to bat for him. And they won’t, they can’t, they truly are limited. And by remaining limited, they’re staying intact. So as much as we hate the FBI, as much as the DOJ has become dysfunctional, we should all at least for a brief second, breathe, a little bit of a sigh of relief about the fact that these institutions have not fallen completely off the deep end to serve Donald Trump instead of serving the U S constitution. You know, that’s a little bit of a silver lining that again, these organizations are awful, but apparently there is a line that they’re not willing to cross. The line should be moved much further, you know, way, way beyond the murder and killings and things like that. And assassination attempts. Yeah. They shouldn’t do that either, But Sometimes you gotta take the smallest little victories. And I think this is one of those.