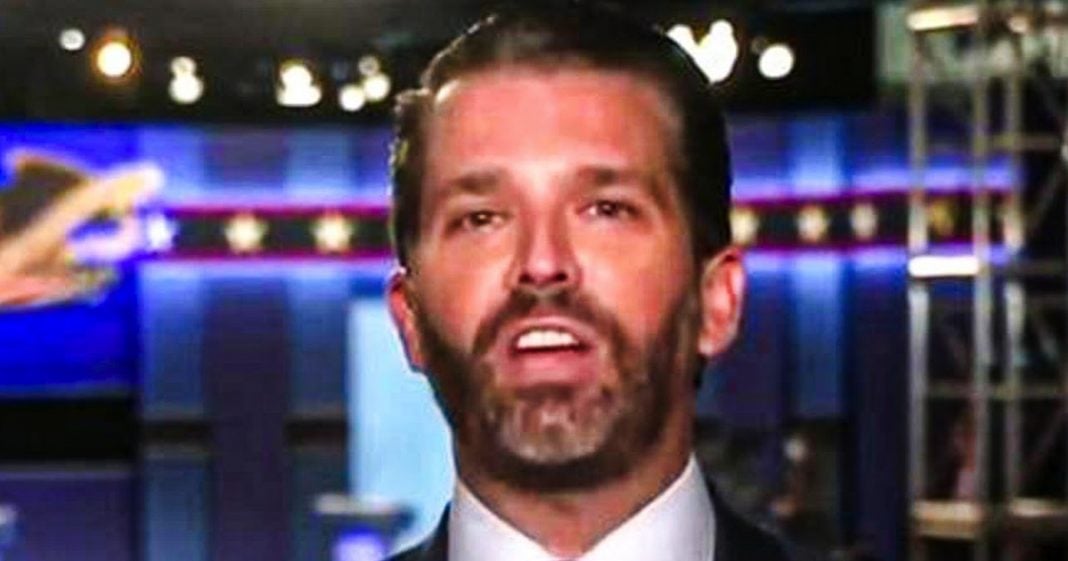 Republicans in Georgia are terrified that Trump’s attacks on Republicans in the state is going to cost them the two senate seats headed for a runoff, and they are now trying to convince Republican voters that the Trumps really are on their side. They’ve started running ads featuring Donald Trump, Jr. as a way to pander to these voters, even as Trump publicly says that he wishes he’d never endorsed those Republicans. Ring of Fire’s Farron Cousins explains what’s happening.

Right now members of the Republican party are panicking about Donald Trump’s nonstop attacks on Republicans in the state of Georgia, for anybody who hasn’t been paying attention. I know we’ve said it ad nauseum here, but for one more time, uh, there are two Senate runoff races happening in the state of Georgia for the us Senate, both Senate seats up for grabs, both Senate seats currently held by Republican incumbents, uh, Kelly Loeffler and David Perdue, very strong democratic challengers. These races are close and they determine who’s going to control the U S Senate. If Democrats take both the seats, uh, it would be a 50 50 split with Kamala Harris being the deciding tie-breaking vote, which would therefore give Democrats the majority it’s important to both parties control of the Senate is up for grabs. And for the last few weeks, Donald Trump has nonstop been trashing the Republican governor and Republican secretary of state in Georgia because they refuse to alter their election results and give Donald Trump Georgia’s electoral votes, sorry, but apparently even they have limits.

So Trump has been out there attacking these Republicans. Uh, other Republicans have been telling Republicans in Georgia to write Trump’s name in, in these Senate races, you know, teach the Republican party a lesson because they’re not helping Trump with his fraudulent election challenges. Republicans are in trouble. So a new group formed by Donald Trump. Junior’s advisors called save. The us Senate pack has come together and they’re putting out an ad. You’re do a multi-million dollar ad buy in the state of Georgia featuring Donald Trump jr. Telling people to support Kelly Leffler and David Purdue. So they think that even though big daddy, Trump hates the Republicans in the state and he’s furious with them. Maybe Trump Jr’s image can, can get people to say, Oh, well the little guy, the slower one things, these are maybe I’ll vote for them now. Um, I don’t know if they realize this, but when you’re in a cult, if you’ve ever studied the psychology of people who get sucked into these Colts, um, you can’t just replace the leader with different person that doesn’t work.

They don’t have the same charisma, even if they’re related like that. Donald Trump jr. Does not have the same poll, the same sway over these voters as Donald Trump himself does Trump jr. Can not pull in the crowds that his daddy can. Trump jr. Cannot whip a crowd up into a frenzy. The same way his daddy can. He is not the same, man. He just doesn’t have it. Maybe he will someday. But right now he does not. And putting him in an ad saying, no, no, no. It’s okay to vote for these people. We like them. We just don’t like the other guys at the same time when your dad is saying Georgia sucks. We hate you, Georgia Republicans. Nobody likes him. They’ve always been horrible. I wish I’d never endorsed them. That was the latest thing he said this way. I wish I’d never endorsed him. Yeah. Putting one of his idiot sons in an ad, I’m sure that’s going to undo all the damage that Trump has spent the last few months, making sure Republican voters understood. Good luck with that strategy. See at the runoffs.