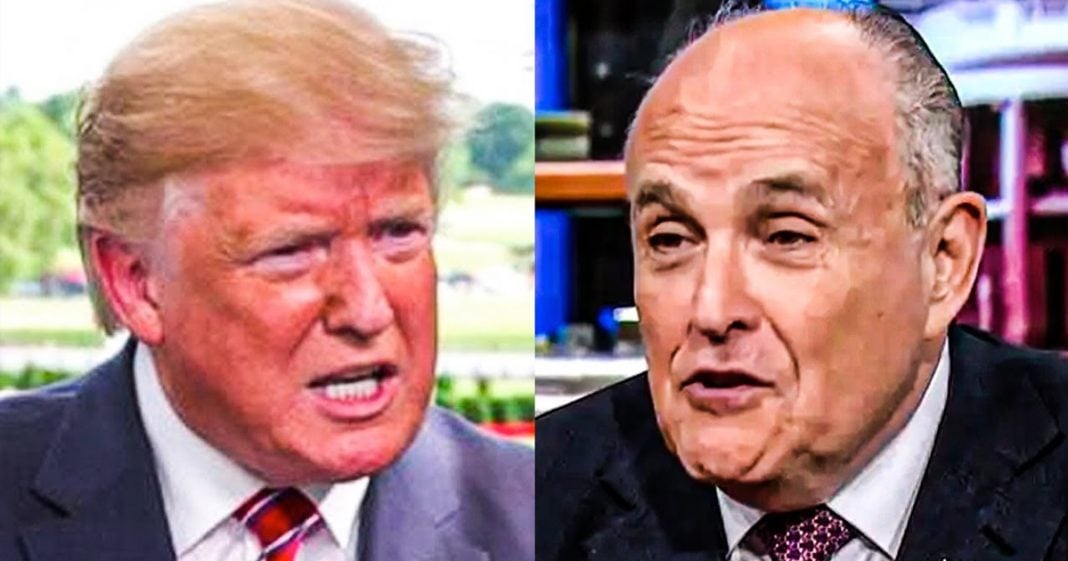 ABC News reported this week that Rudy Giuliani only became Trump’s lead lawyer on his election fraud lawsuits because no real, reputable, talented lawyers were willing to risk their careers and reputations by representing the President and his fraudulent claims of fraud. In addition to that, the President is apparently growing increasingly sick of Giuliani’s ridiculous and pathetic antics, meaning that Rudy will be left with nothing when all of this is over. Ring of Fire’s Farron Cousins discusses this.

According to a report from ABC news this week, Donald Trump, wasn’t exactly thrilled with having to turn to Rudy Giuliani to handle his election fraud lawsuits. And the only reason he did so, again, according to the reports is because no other reputable, talented or competent lawyer was actually willing to do this. And we already knew that though folks in the early days of it, believe it or not. Trump actually had in, we discussed the settling. Trump actually had real law firms that were handling his cases. You know, you had Jones day, you had right Porter or Porter, right? Excuse me, up in Pennsylvania, they were handling this. And then once they started looking through these things and people started rescinding their affidavits admitting they lied the, these law firms, like, you know what done, not going to do this anymore. And so once the big wigs, you know, the good lawyers, even though they worked for the bad guys, they’re still good at their jobs.

Uh, once they left Rudy Giuliani, he was the only one sitting there. And Trump said, all right, all right, I guess, here you go off goes, Rudy, hadn’t tried a case in 27 years, but man, was he ready to take that job? And we all know what’s happened since right? The melting face, the ghosts of Hugo Chavez and the communists from Venezuela and Iran and Serbia have infiltrated the United States voting system somehow. And we got what we got now. And according to other reports out this week, Trump has really getting sick and tired of Rudy’s antics. Uh, which obviously, I mean, can you blame him? The dude reportedly wanted 20 grand a day to go out there and melt like an ice cream cone on national television. I hope he got paid. Honestly. I really, really hope you got paid Rudy, but Trump is at you.

He is tired of what you’re doing and here’s the kicker. You’re not going to have anyone left when you’re done, because by lumping in your lot with Donald Trump, you have alienated all of the other Republicans that you could have also hit your wagon to. If you hadn’t been all in on Trump trying to be as attorney general, you absolutely could have been there with the Lincoln project, man, you could have been like one other top people, but so they won’t talk to you. So only the Trump people will well, except for the fact that Trump hates you now. And as soon as he leaves office Rudy, he is going to throw your under the bus so fast that you’re not even going to know what hits you.

And then you will have destroyed your reputation. Possibly been disbarred, still be under criminal investigation in New York. By the way, let’s not forget that happening and you’ll have no one left. This is your legacy. Now, dude, you through whatever good will the world had for you as mayor of New York on nine 11, you threw it away by hitching your wagon to Trump. And again, you are two months away from that man throwing you under the bus saying you’re the most incompetent lawyer he has ever had the displeasure of working with Mark it down right now, folks that I am calling it. That is what Trump will say. And it will be shortly after the election that he says it. Rudy will be left with nobody. And it’s going to be a sad final few years for Giuliani.