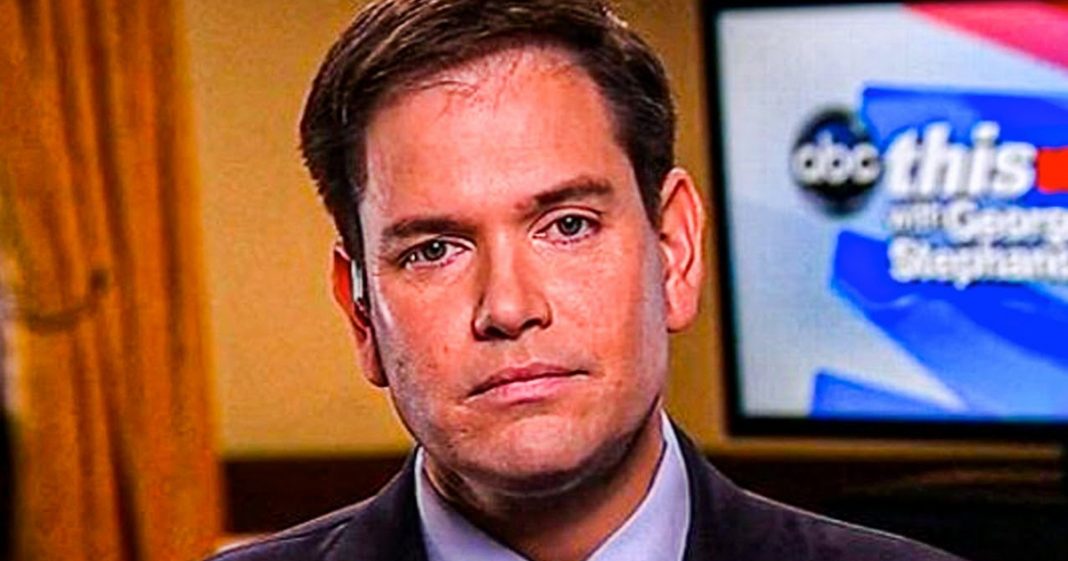 It is unclear right now whether Republican Senator Marco Rubio is an eternal optimist, or if he is just painfully stupid, but history would indicate that the latter is the most likely option. On Wednesday morning, Rubio took to Twitter to whine about the fact that the media isn’t covering the “good news” that’s happening regarding the pandemic, even though the only good news (about vaccines) has been widely reported by every major outlet. Ring of Fire’s Farron Cousins discusses the odd case of Rubio.

On Wednesday morning, Marco Rubio woke up and I guess he either turned on the news or open up a newspaper, whatever he’s doing, because remember the Senate’s been off for about a week now they’re not working. So Rubio is just on a wonderful vacation and he woke up and he got mad. And what made Marco Rubio? So mad? The news, the news is so negative today about the pandemic. So Rubio opens up his little Twitter app and he tweets out the following. He says on COVID media emphasized bad news, even when we had positive developments and did more Trump hydroxychloroquine stories than all vaccine stories, combined, part of a broader pattern of characterizing. Everything is bad news. Republicans are to be blamed for.

Okay. Yeah. I’m sorry. The media is not being more optimistic about the pandemic, but you’re absolutely lying through your dumb teeth. If you think that the media hasn’t covered the vaccines, why do you think the stock market did so well over the last week, bud? They did it because the, the, the vaccine news, which was widely reported by literally everyone, since stocks back up high, you should know that here’s the thing though. Rubio Rubio knows he’s lying, but there’s a problem. And, and, and this is what made me think of this with this story. I talk a lot about how stupid Republicans are the elected officials. Um, and here’s the thing they are, except most of them it’s an act. The stupidity, isn’t something I think they actually believe. It’s not because they’re really stupid. They’re pretending to be stupid so that they can connect more with the common people.

Cause they think the common people are stupid. Ted Cruz is a great example. Ted Cruz is not a stupid human being. He is very tactical, but he comes across as stupid so that he endears himself to his base. Lindsay Graham, same way, Mitch McConnell’s same way. Marco Rubio. No, his stupidity is not intentional. Marco Rubio is genuinely a stupid person. I’m not kidding. When I say that, I firmly believe that Marco Rubio’s IQ his level of knowledge. I believe it is well below average. Like I don’t think this man is intelligent enough to be serving as an elected official at any level of government in any country on the planet. I think Marco Rubio is dumb as a fricking rock and he repeatedly proves it. He proves it every time he speaks. Chris Christie was one of the only Republicans that had the courage to point that out in 2015, during the Republican debates, talking about the fact that this man rehearsed like three sentences and repeats them over and over again, like a robot.

And when you pull him off task, all he can do is panic. Go back to his three sentences. I hope everybody remembers that. If not go back and rewatch it, it is worth it. Christy destroyed Rubio. And how did Rubio respond? He repeated his same couple of sentences there in Christy called him out again. And he said, see, look what he’s doing. Marco Rubio is not smart. And here’s the kicker. If Marco Rubio was running in any other state, besides Florida, nobody would know who he is because he wouldn’t have ever won an election. He has manipulated enough people in this state simply by calling himself a Republican to continue to win office. And it has nothing to do with the Hispanic population, the Cuban population, any of that in Florida, that’s not what it is. It’s calling himself a Republican in a solidly red state because let’s stop kidding ourselves. That’s what Florida is time for Democrats to write off Florida time for us to essentially abolish the Senate, to get rid of these crazy people like Marco Rubio, who wield too much power and are too stupid to understand. We need radical changes in this country. And idiots like Marco Rubio are proving that every single day.