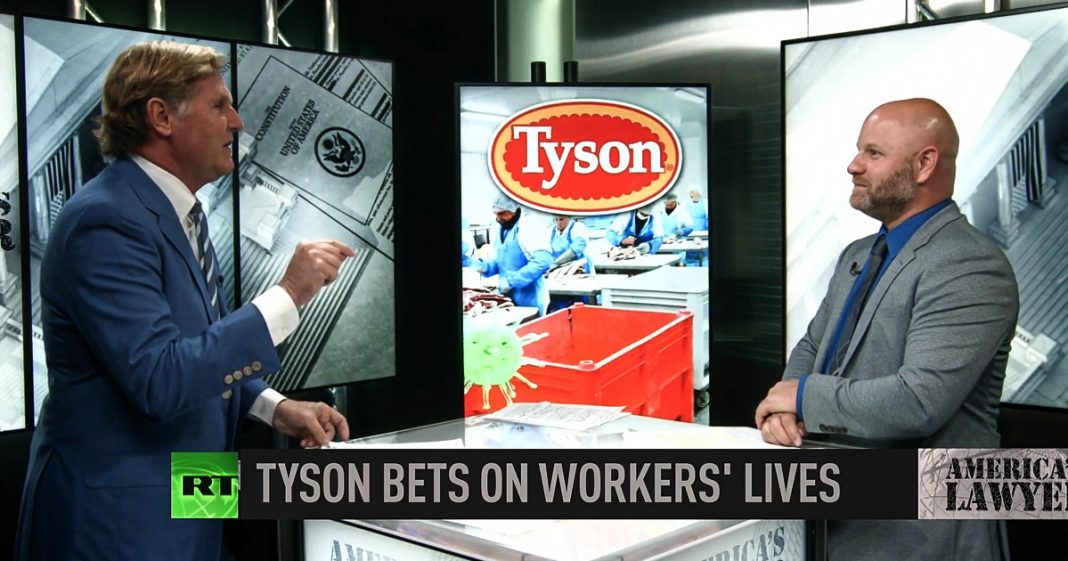 Via America’s Lawyer: Managers at Tyson meatpacking plants have allegedly been placing bets on how many workers would succumb to COVID on the job. Mike Papantonio & Farron Cousins discuss more.

Farron Cousins:                  Yeah, I don’t know who, who ends up winning the money, or if they actually ended up paying out at this point, when Tyson came out and issued a statement, oh, we’re, we’re a family here and we’ll investigate this. So, so who did they find to do the investigation as to whether or not they’re betting who’s going to live or die? Eric Holder is the one who’s going to be conducting this investigation with Covington Berling.

Mike Papantonio:             Let, let me tell you a little about Eric Holder, I’m kind of a specialist on Eric Holder. Eric Holder is appointed attorney general by Obama. He’s, he’s this guy that comes from a, well, this is what he does for a living. He represents white collar criminals. That’s his specialty. As a matter of fact, while he was attorney general, if you look at every white collar criminal who stole money from mom and pop, who created pharmaceuticals that were killing people, who defrauded the government by whatever means necessary. If you take a look, or how about the wall street burn down.

Mike Papantonio:             Slaps them on the wrist. And everybody goes away. Eric Holder is like having Colonel Sanders guard the chickens. That’s what, that’s what’s going on here.

Farron Cousins:                  It, it really is because this is a guy and this is a defense law firm that’s going to be investigating this because I’m sure Tyson has paid them a ton of money. And they’re going to come out and say, you know what? We found the bad Apple. Maybe it was two or three bad apples. We punished the bad apples. We got rid of them, the bunch isn’t spoiled. So let’s all move on. We put a happy face on Tyson and two or three fall guys, you know, disappear for awhile. That’s what happens here.

Mike Papantonio:             I doubt there’s going to be, look, how about, okay. Here’s, I think when we take a look at the, really the absurd, where it comes to the way workers were treated during the pandemic, we look at the packing industry. Don’t we?

Mike Papantonio:             We look at Smithfield. How about that story? Smithfield is owned by the Chinese. The Chinese knew about COVID way before everybody else knew. They knew how dangerous it was. They made no attempt in the United States to change the way that Smithfield was, was treating employees. They kept them out there without masks, without separation. After the Chinese knew clearly that this was going to kill people and they kept them at Smithfield. So it, was Tyson any better? Give me your, give me an estimation on Tyson. I mean.

Farron Cousins:                  Doesn’t look like it based on what we’re seeing in these complaints, Tyson was doing the same thing. You’re working in close quarters. They’re not giving people the PPE that they need. They’re not being allowed. One, one actual mid-level manager was actually not allowed to go get a COVID test even though he was showing symptoms, he was told we’re all showing symptoms, go back to work.

Mike Papantonio:             Yeah. Okay. And now, now what, do you want to put some money on whether or not the Democrats give them immunity? I’m betting they do.

Mike Papantonio:             I’m betting they get immunity. They’ve killed people. They’ve killed people’s family. Somebody gets COVID, goes home, Granddaddy gets COVID and dies. Smithfield knew about it. Tyson knew about it. And we actually have Democrats and Republicans saying, you know, gee whiz, we have to feed America. Now, how about that argument? They weren’t even feeding America. Most of the stuff they were, they were producing was going to China.

Farron Cousins:                  Right. So it’s the same cycle. And unfortunately, because, you know, as we had already discussed, Biden’s put the same people in charge. Eric Holder’s a good friend of Biden. He is now involved in this. Nothing will happen. Nobody is going to go to jail, but every one of them should.