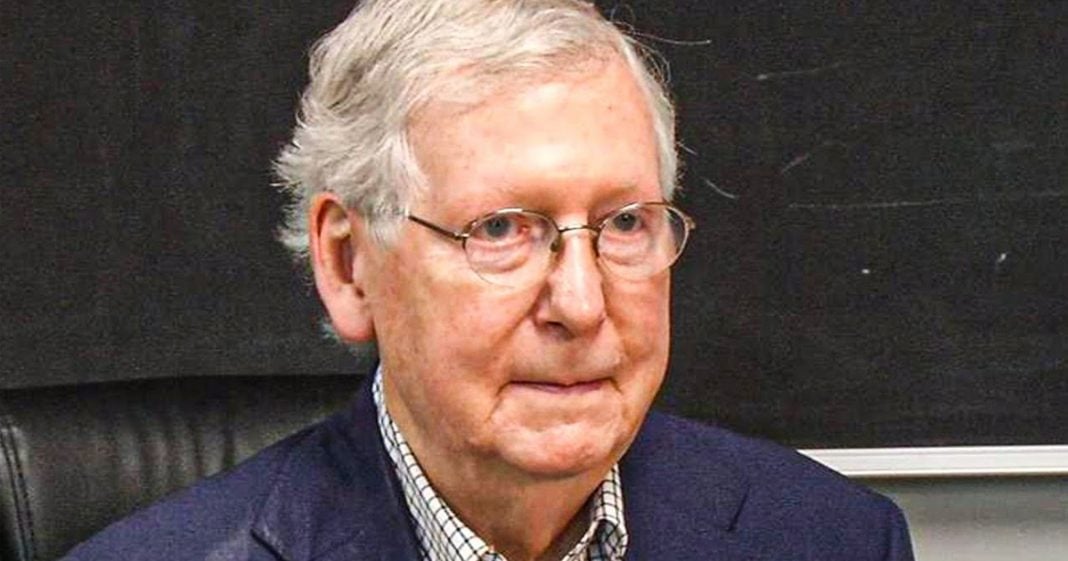 According to new reports out this week, Republican senate majority leader Mitch McConnell began pushing for Amy Coney Barrett to replace the late Ruth Bader Ginsburg shortly after he received the news that Ginsburg had passed away. It was the same night that he began talks about how to ram through Barrett’s confirmation, before Ginsburg’s body had even been attended to by professionals. Mitch McConnell is a heartless, calculating monster, and the world will be a better place when he is no longer in power. Ring of Fire’s Farron Cousins discusses this.

According to a new PBS frontline documentary out this week. On the night that Ruth Bader Ginsburg died, Mitch McConnell picked up the phone called Donald Trump. And he said, according to his former chief of staff McConnell told Trump, I’m going to do two things. I’m going to put out a statement saying, we’re going to fill the vacancy. And two, you have to nominate Amy Coney Barrett. Now, again, this wasn’t the next day. This wasn’t after people had had some time to digest the news. This was quite literally minutes after they learned that Supreme court justice, Ruth Bader Ginsburg had passed away minutes. Mitch McConnell had that name. Amy Coney Barrett in his head already. He was ready to strike, just waiting for her to take her last breath. And he didn’t even hesitate. This is a woman that he has known for decades. They have both been in DC for decades.

They know each other, and I don’t care if you liked him or didn’t like him, but he couldn’t even show enough respect for this woman to wait until the next morning. He just said, Nope, guess what? It’s on. Here’s your nominee. I’ll make it happen. Mitch McConnell is the most evil human being in Washington, DC throughout the entire Trump administration folks. Mitch McConnell has been the , the sadistic son of a pulling the strings from behind the scenes. Oh sure. Trump has done plenty of horrible things on his home. Yeah, yeah, absolutely. Mitch McConnell’s worse. Mitch McConnell has done far more lasting damage to this country. And this also, by the way, confirms something we had been saying for three years now, and that is that Donald Trump was being fed these judicial nominees by Mitch McConnell.

The medical professionals hadn’t even had a chance to tend to her body yet by the time Mitch McConnell made this disgusting phone call and that’s what we’re dealing with here, Mitch, McConnell’s not exactly the kind of human being that’s going to be missed when he leaves office or when he leaves this life. He knows what his legacy is and he’s proud of it. He’s proud to be hated his proud to consider himself the grim Reaper of progressive legislation. So when we mock him because he trips and falls while walking onto a stage or when we mock him, because he does a press conference where his hands are all purple and bandaged and people say, you shouldn’t do that. I know he’s mean, but you shouldn’t do. Don’t ever come at me with that. Again, this man is pure evil. And so when he does something stupid, if he falls and breaks his leg, I’m going to laugh at him and I’m going to mock him because the damage he has done to this country, the disrespect that he has shown to Americans, no mocking that I could dish out will ever make us, even for that.