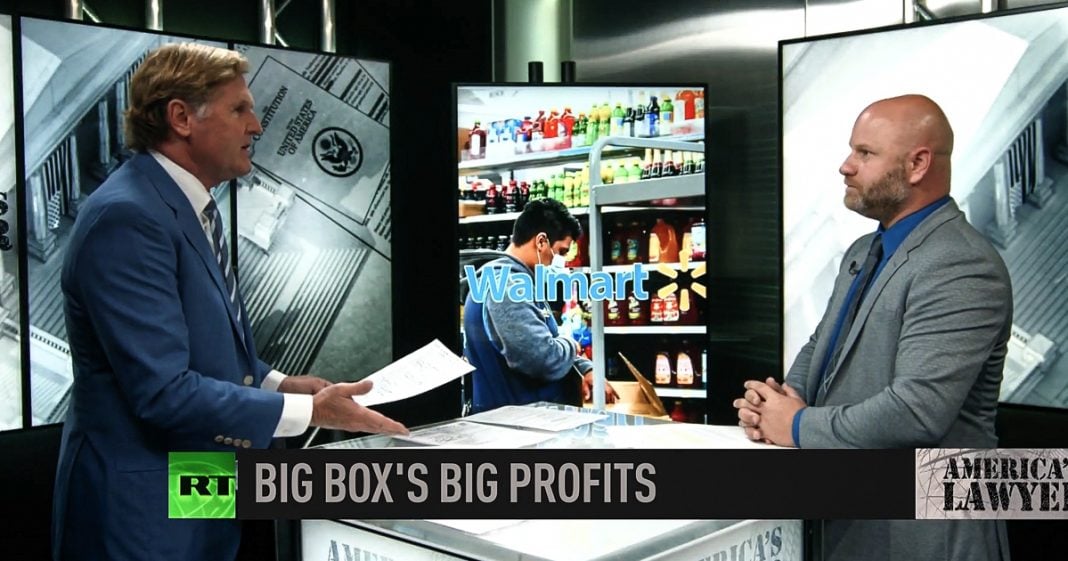 Via America’s Lawyer: Big box stores like Walmart and Amazon continue to enjoy humongous profits during the pandemic, while thousands of their employees still rely on welfare. Mike Papantonio & Farron Cousins discuss more.

Mike Papantonio:             A new report shows that America’s most profitable big box stores are also some of the worst where it comes to taking care of American workers. How about this story? Walmart, Walmart, I, it’s all the big box stores. I mean, let’s, but let’s use Walmart, for example.

Mike Papantonio:             Walmart has employees, they’re not even paying minimum wage. So the employees are going to taxpayers to have to pay for, to be able to eat, to be able to have housing. They’re going to a welfare system that taxpayers are having to pay because Walmart won’t pay their way. It’s not just Walmart, is it?

Farron Cousins:                  Right. No, you’ve got Walmart, you’ve got Dollar Generals in there. McDonald’s is in there. Amazon is also a huge culprit of this. So what happens is they move into an area and they already, these stores, whenever they come to an area had started a bidding war between several different locations. And you and I have talked about that in the past. They get all the tax incentives they can get to build their little business there. Then they pay people, these dirt wages that force them to go on food stamps and Medicaid. So they’re then subsidized further by these cities and towns and States, just to bring their cheap products there.

Mike Papantonio:             And it, it is always a big lie. Puts mom and pop businesses out of business. Taxpayers subsidize everything that they’re doing. And then tax, taxpayer, taxpayers then have to pay because the, the, the employee is being pur, he’s being taken advantage of by not paying wages. So of course he has to go on welfare. We let it go again and again, it happens every time a big corporation comes to a town and say, hey, give us money and we’re going to employ a bunch of people.

Farron Cousins:                  Well, you know, what’s interesting is back, you know, 25 years ago, bringing in a Walmart to your area, bringing in a Target or a Best Buy to your area was seen as, oh, wow, we’re making progress. We’re getting the big stores here now. But really what it is, was a death sentence. And you, you, you hit it right on the head because it kills mom and pop businesses. They suck taxpayers away from other projects that sorely need it. And they force these employees into such low wages that the taxpayers have to come to their rescue. They’re externalizing all of their costs and we’re the ones who end up paying the bill for it in order to buy their cheap goods.

Mike Papantonio:             It, it’s always the same. It’s the same story. I mean, we could go state by state Georgia, for example, 4,000 of the Walmart workers are on Medicaid health assistance. They’re on food stamps. You could go state by state, Arkansas, Indiana, Maine, Massachusetts, Nebraska, North Carolina, any, anywhere where a major corporation like Walmart has it’s and while that’s going on, oh, by the way, what did they make, a $63 billion during the COVID crisis. They’ve made $63 billion. The CEOs and management, tens of millions of dollars in bonuses. But nevertheless, they let the worker work for dirt wages. And then we as taxpayers have to help that worker because that’s the thing we’re supposed to do. When they can’t buy food, we have to buy them food. Walmart won’t do it. Walmart gave them a five, what a $500 bonus one time for.