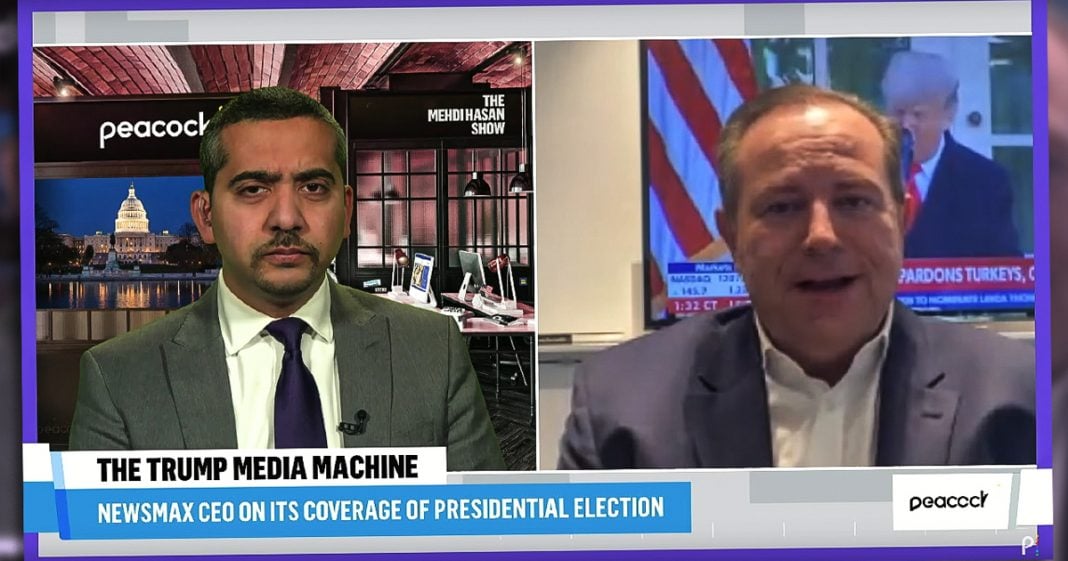 Chris Ruddy, the CEO of the budding Newsmax outlet, said during an interview this week that his network wasn’t being honest with people about claims of election fraud. He also said that this kind of lying was ok because his network was just letting people state their opinions, and they shouldn’t be taken as fact. This is the classic excuse by idiotic right wing outlets, and it is what separates them from those of us on the Left. Ring of Fire’s Farron Cousins discusses this.

During an appearance on the peacock channels, the Medhi Hassan show this week, Chris ruddy, the CEO of Newsmax, which is quickly becoming one of Donald Trump’s favorite news organizations admitted that his network has not been telling the truth. Uh, basically ever since the election happened, Newsmax CEO admits that his network is, is essentially lying a lot because they don’t have any evidence whatsoever of widespread voter fraud. But he says, it’s okay that we do this. It’s okay that we lie because we’re just letting people express their opinions. That’s what this is. Why would you think we’re news? Right? I mean, it’s not like it’s the first word of our name. Yeah. You see Chris ruddy, uh, your channel’s not called opinion. Max it’s called news max. So give us for thinking that somebody, uh, something that literally caused itself news would, would be giving factual information.

The truth is folks. This is the Fox news defense. This is how Fox news gets away with saying, Oh yeah. A lot of our people are lying through their teeth, but Hey, those are our opinion. People. Those are our entertainment people. They’re not the journalists. They’re just people out there saying what they think is happening in the world. It doesn’t have to be based in reality. They could just make it up off the top of their head because that’s part of their job. And then of course the courts have ruled that the media does not have any obligation to tell you the truth. They’re legally allowed to lie.

So nothing matters in everything is fake, right? I mean, that’s the way it would seem. But the Newsmax thing, we, we, you can watch Newsmax, watch it for a minute and watch it for five minutes. If you can stomach it, they’re just making it up as they go. And as I have repeatedly said over the years, what a wonderful guy do you know what sucks about my job is difficult. It actually is. And those of us on the left who really take this kind of stuff, seriously, we work our butts off. We’re constantly reading. We’re constantly fact checking. We’re constantly looking at stats and graphs and charts and all kinds of stuff. Reading theory, doing real leg work behind these short little videos that we produce so that we can come with informed data and educated opinions. Cause yeah, I have a lot of opinions here too, but they’re based upon actual facts and figures.

You go to your Newsmax, you go to Fox news, own one American news, uh, all your Charlie Kirk. She mentioned peers. They just make up. Stop. They don’t have to have anything to back it up because they’re just, Oh, we can just make this up. We can just say, Hey, did you know that 80 million babies were aborted yesterday by one doctor dr. Death? Yeah. These are the kinds of things they go out there and say, did you know that 20,000 dead people voted for Donald Trump and one Georgia city that has a population of five. That’s the kind of crap they peddle to us. Us, uh, not to me is I don’t watch them. And they think it’s okay. And worst, even worse than that, uh, the audience doesn’t know the difference nor do they seem to care. And that is the sickest part of the entire story.