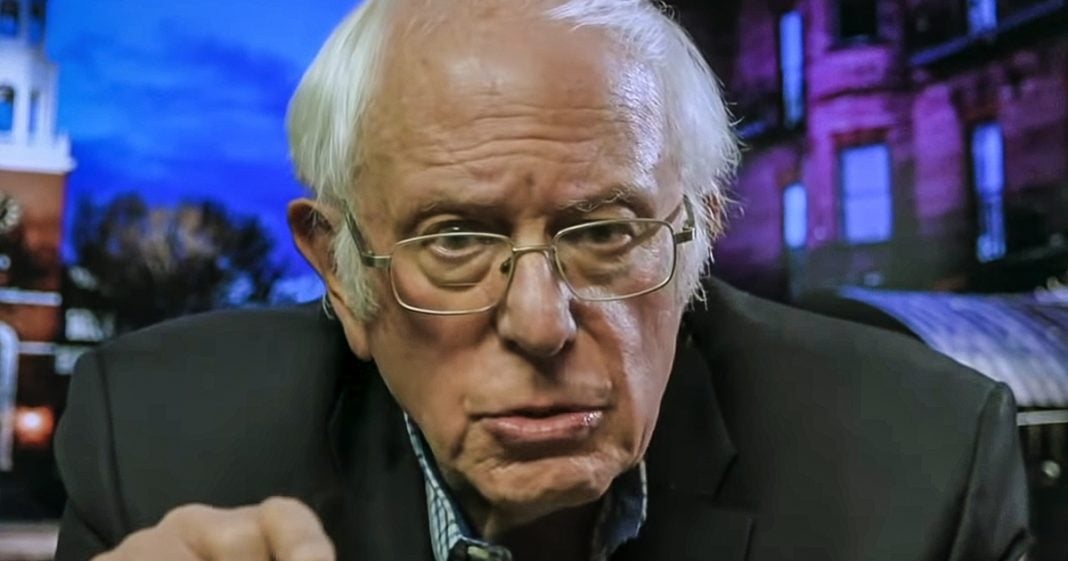 Senator Bernie Sanders isn’t wasting any time warning Democrats about what the next few years need to be about in order to prevent a much worse demagogue than Trump from coming along and winning in 2024. Sanders, in an op-ed for The Guardian, warned Democrats that they have to address the needs of the working class in America, or else they open them up to follow the next pied piper who comes along. Ring of Fire’s Farron Cousins discusses this.

On Tuesday of this week, Senator Bernie Sanders, uh, published an op-ed in the guardian, the shoppette then became the basis of a petition to basically encourage the democratic party over the next four years to pursue a progressive agenda. Because if they don’t Sanders warned, you are going to create the circumstances necessary for somebody far worse than Donald Trump to win in 2024. This is a sentiment that we have repeatedly been discussing since the election, since even before the election. Uh, most other folks on the left as well have been saying that we’re all on the same page here. And we can all see very clearly what has to happen in order to avoid that worst case scenario. That unfortunately it already looks like we could be headed there. And here’s what it is. Bernie Sanders in his op-ed points out that you have to take care of. You have to give some kind of tangible gain to working class Americans, to the people who are struggling to get by to the people that the system repeatedly overlooks and does nothing to protect. You have to give them something, a reason to vote for you Instead of against you.

Now, Trump did that in 2016, he went to these people and trust me folks, I know we talk a lot about people being conned or duped, or, you know, they’re just inherently racist and sure, all of that did play a massive role in 2016. But when your circumstances are such that you don’t know how you’re going to pay your bills, when you really feel like you’re on your Last leg, that you have nowhere Else to turn to that you have no hope in the universe. And Then this politician shows up and he says, I understand your suffering. I know Why you’re suffering and I’m going to fix that problem. And then you’re not going to suffer anymore. And you look around and you say, well, none of the other stuff is Worked may as well. Give it a try. That’s how that demagoguery works.

These aren’t necessarily people that were members of the Trump cult. These aren’t people that are inherently racist. This truly are the people. These truly are the people, excuse me, that have the economic anxiety because they’ve lived with it. Their whole lives. They’ve been through Republican administrations, democratic amendment administrations who did nothing for them. And sure Trump did nothing but make their situation worse. But if Biden, after four years, hasn’t made their situation better. They’re leaving the door open just like Obama did for another demagogue to come through in this time. Again, it will be somebody worse than Trump.

And the problem Is Trump already laid out the formula. Everybody knows it. Now everybody left and right, Right. So if you don’t do something to, to Close the door for the next demagogue, you know, it’s going to be hard to sell to these people. I’ll make your lives better when they can just say, Hey, thanks. But this dude already did. See how easy that is. You have to do is actually take care of people. It honest to God is that Simple. And yet Democrats Are still too reluctant to do it because God forbid you get labeled a socialist, even though, even if you don’t do it, you’re going to get labeled a socialist. And most Republicans probably can’t even define that word. And it’s not even a dirty word to begin with.

Bottom line Is we have all been screaming at the top of our lungs for months. Now, give the people something, something tangible, preferably right out of the gate too. So they know immediately you’re it. The student loan thing, do It forgive it Don’t means test it. Don’t say if you make this much in this year, and if you did three years, just say, Hey, up to 50 grand Doesn’t exist. You’re welcome. Do it Most favored nation status. Trump kept saying, I’m going to do it. I’m going to do it. He never did do it, but not just for Medicaid. Do it for the whole country force these drug pricing bills through Congress, Do something To give the people a win and do it Fast because if you don’t, you can’t Kiss 20, 22 and 2024. Goodbye.