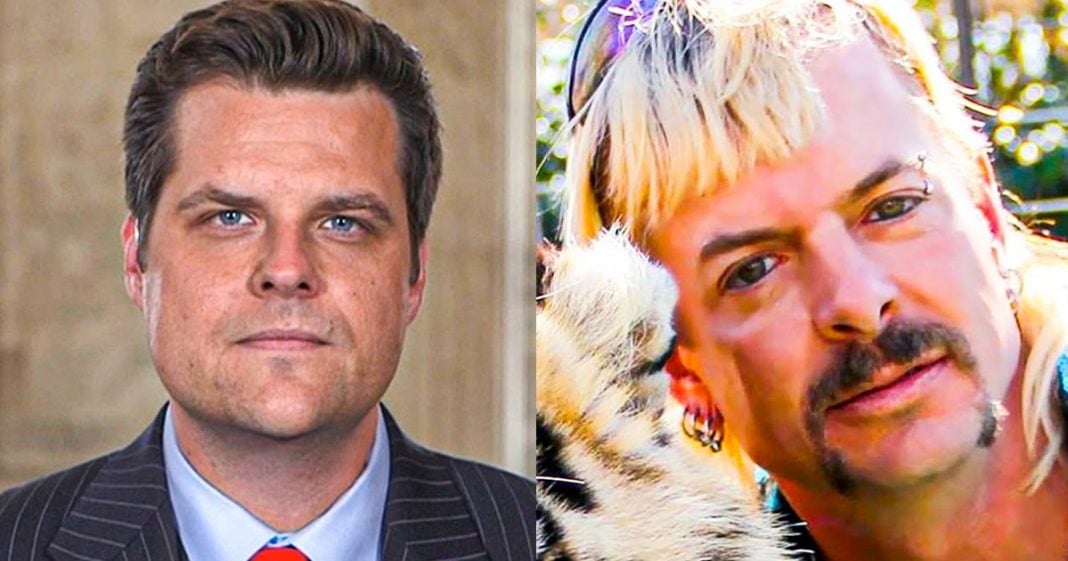 During a truly bizarre interview this week on Fox News, Republican Congressman Matt Gaetz suggested that Trump should go on a pardon spree and go ahead and issue himself a pardon, and to go ahead and throw in one for Joe Exotic, the Tiger King, too. The Tiger King pardon is bizarre enough, but the fact that Gaetz thinks Trump should pardon himself actually says a lot about what Gaetz thinks of his idol. Ring of Fire’s Farron Cousins discusses this.

On Tuesday, my idiot, Republican Congressman Matt Gates appeared on Fox news as he loves to do, because that’s really where he wants to be, not in the halls of Congress, but in fact, on the air every day, that is his dream. And that is what he’s working towards. Uh, whenever he finally loses a race, but anyway, he appeared on Fox news on Tuesday to suggest that not only should Donald Trump pardon himself, along with the Thanksgiving Turkey, but he should also just start throwing random pardons out to everybody, including Joe exotic the tiger King. Now I know it seems like an eternity ago, but, uh, we all remember back in the early days of the lockdowns, when the tiger King was the biggest news out there. Uh, and it was, it was absolutely, uh, insane to watch that whole thing play out. Uh, but nevertheless, Matt Gates is trying to, I guess, rehash that and brought up the fact that, Hey Donald, uh, how about you just pardon the tiger King? After you’re done pardoning yourself. Here’s what he said. He said he should pardon the Thanksgiving Turkey. He should pardon everyone from himself to his administration, officials to Joe exotic, if he has to, because you see from the radical left a blood loss, that will only be quenched. If they come after the people who worked so hard to animate the Trump administration with the policies and the vigor and the effectiveness that delivered for the American people.

Now I know we have discussed in the past that a president can issue a blanket. Pardon? Meaning you can straight up say if this individual committed any crimes between, uh, January 1st, 2017 and January 1st, 2020, if you committed any crimes in that period, I pardon you for them. You don’t have to pardon somebody for a specific event, but see Matt Gates, didn’t say that he didn’t go on to elaborate that. That’s what he means. Matt Gates is very close to this administration. Matt Gates likely knows where the bodies are buried. No doubt. Having helped bury a few himself metaphorically. Of course, I’m not suggesting anybody actually killed anybody, but Matt Gates has been in the thick of all of this.

So why didn’t you? He mentioned because the president can issue blanket immunity, pardons did Matt Gates just tacitly admit that he understands that this administration and some of Trump’s biggest enablers in his administration committed crimes times, crimes that they could be prosecuted for. Because that kind of seems to me like that is what Matt Gates admitted to that Fox news audience. But you know what folks, I’m not worried about that at all. Go ahead and issue yourself a pardon. I don’t care. What are you going to pardon yourself from? You know, what’s it going to protect you from being prosecuted for the obstruction of justice that you’re already not going to be prosecuted for? You can only pardon federal crimes, Joe, Biden’s already said, he’s not going to use the justice department to go after Donald Trump because he wants to unify the country and move forward.

Making the same mistake Obama did by not going after the Bush criminals Biden said, he’s going to do the same thing. So what does Matt Gates even talking about here? Well, for one, he’s trying to get the Fox news idiots riled up to, Oh God, they’re going to prosecute our boy. Oh, even though he’s said specifically, I’m not going to do that. Matt Gates is counting on the Fox news audience being as stupid as he is. And so that’s why he’s peddling. These lies out there. Now, the real crimes, the good ones, the juicy ones, the ones he could actually be locked away for. Those are happening in New York state. And there’s nothing he can do to stop those. So if he wants to issue a pardon to himself, let it happen. I’m not worried because that New York attorney general is tough as nails. And she is planning on nailing him as soon as he leaves office.