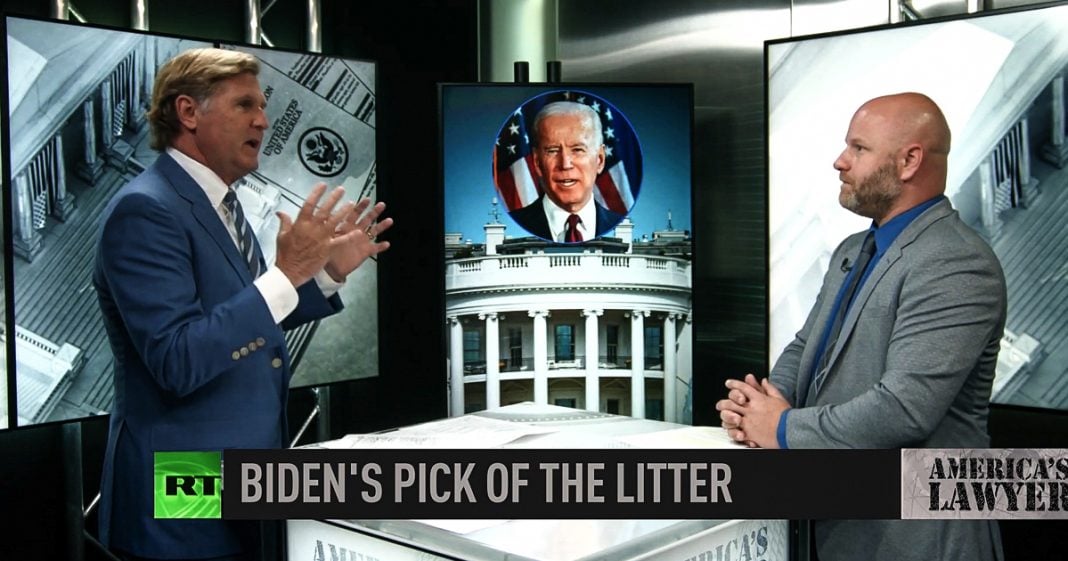 Mike Papantonio:             Joe Biden is assembling a cabinet of corporate cronies, the same corporate cronies who have pushed the democratic party way to the right. Joining me to talk about this, Farron Cousins, editor of the trial lawyer magazine. It’s just a remake, isn’t it? I mean, it’s just like, okay, Bill Clinton, again. Obama again. This, this fear of moving somewhere else. And I get it, you know, he’s been there for 47 years. This is all he knows. Take the same coffee cup, drink out of the same coffee cup. Use the same old worn out people who’ve shown again and again, that they’re worn out and they’re far, far to the right of where the democratic party should be. What’s your take on it?

Farron Cousins:                  And unfortunately what Joe Biden needs to understand because I know he’s getting a lot of praise. The adults are back in the room is what the headlines say, but these are the same people that created the conditions to essentially do nothing for eight years that led the public to vote for Donald Trump.

Farron Cousins:                  And we’re headed right back to that. Except this time it’ll probably be something much worse than what a Donald Trump was.

Mike Papantonio:             Let, let me tell you light, when, when the lights went on and should have gone on for everybody Michael McCabe, okay. Really, Michael McCabe to run environmental issues in the United States. This is the guy that pushed the DuPont C8 PFOS story to where, this is, this is a, one of the most awful toxins on the planet. Michael McCabe, who’s his, who’s Biden’s group, good buddy, has been around the democratic party forever. Michael McCabe is, is going to now run the EPA. PFOS is a disaster. It is carcinogen. It causes birth defects and he’s the person who pushed and lobbied to have it on the market.

Farron Cousins:                  Right. And Joe Biden met with him recently, you know, is considering him as the head of the EPA. This is horrible. This guy came directly from DuPont. That is what he knows. That is where he made his money. And that is what he will protect if he comes into the EPA, we’ve seen that.

Mike Papantonio:             Okay. Now what, now, you hit it didn’t you. He’s going to protect it because right now everybody understands that PFAS, PFOS is killing people all over the planet. And so, instead of saying, well, maybe this isn’t the guy, maybe Michael McCabe, the guy who made all this happen, this train wreck, this catastrophe, maybe he doesn’t fit in to the democratic party, but it’s business as usual. Isn’t it?

Farron Cousins:                  It really is and it’s disappointing too, because you could have had Elizabeth Warren chairing the federal reserve or the securities and exchange commission. She would have been a perfect fit. You could have had an actual climate scientist heading up the office of climate change and security.

Farron Cousins:                  Right. I mean, look, I, I’ve met tons of climate scientists over the years. Any one of them would, would probably jump at the opportunity to be able to set policies to put us right.

Mike Papantonio:             Here’s what I’m going to say again and again, he’s an old man. He’s been in politics 47 years. Is he a step up from Trump? Probably. But is he bringing all of these same ugly, old rules back? Absolutely. There’s nothing different about him. We’re going to see the same kind of problems that we’ve seen with every democratic administration.