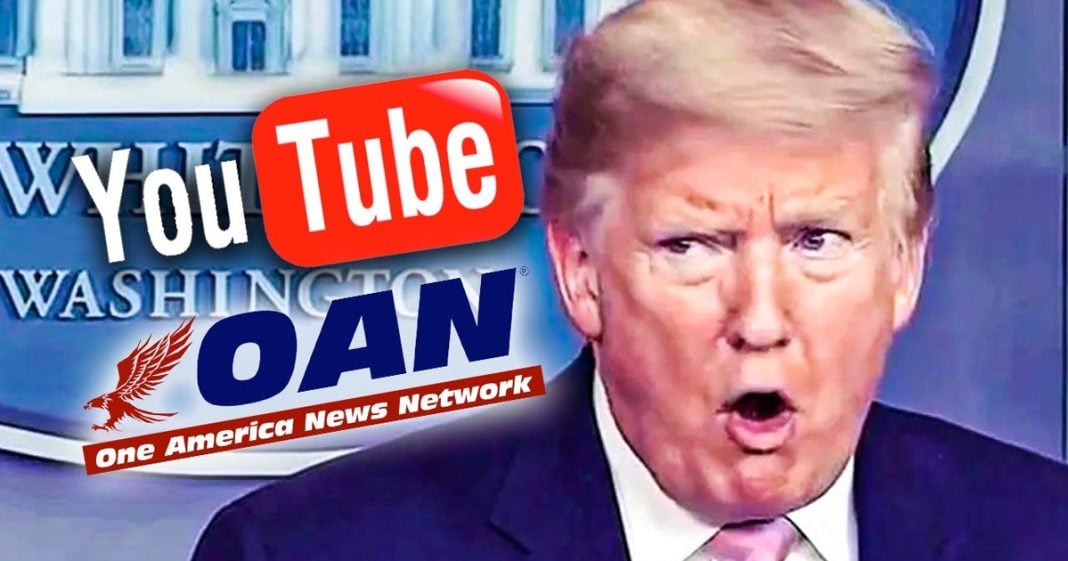 YouTube has been forced to suspend the One America News Network YouTube channel for one week because the network keeps spreading dangerous lies and misinformation about the pandemic. Specifically, the network was trying to tell people that a cure exists, even though there is no cure at this time. This is Trump’s new favorite media outlet, and the suspension is likely going to cause an uproar among Republicans. Ring of Fire’s Farron Cousins discusses this.

Yesterday, YouTube announced that they had suspended Donald Trump’s new favored network, the one America news network – OAN. And the reason they did this is because OAN violated the terms of service that YouTube puts forward. And one of those terms of service that was recently added was that you cannot claim that there is a cure for COVID-19. But according to the statement from YouTube, that is exactly what the one American news network did. So in response, they gave the channel a strike and they suspended them for one week. And that means for one week you cannot upload any new videos. You cannot do any live streams. You just, it is what it is. You got to wait your time out in a YouTube jail, and then you can go back to it. Uh, anyone who’s ever run a YouTube channel, uh, probably understands how this goes, because you’ve probably been through it.

We have, you can appeal the strike. You can try to plead your case. They’re typically very reasonable about that. Uh, you know, cause these things, a lot of times get flagged by automation. And if you don’t have the proper human review, you know, yeah. Things can get lost in translation and they can make it seem like you’re saying something that you didn’t actually say, uh, we’ve won our appeals. Most channels do win their appeals, but one American news network is likely to not do that. Because if what YouTube is claiming they did is true and that they were pushing a cure that doesn’t actually exist for COVID-19 then yes, that is dangerous misinformation that does need to be taken off the airwaves. Uh, here’s the statement. After careful review, we removed a video from own and issued a strike on the channel for violating our COVID-19 misinformation policy, which prohibits content claiming there’s a guaranteed cure.

Additionally, due to repeated violations of our COVID-19 misinformation policy and other channel monetization policies, we’ve suspended the channel from the YouTube partner program and as a result, it’s monetization on YouTube. So that means they also will not be making any money off of YouTube for now that I imagine that has to be a huge revenue stream for this network. Other than, of course the Republican dark money forces that are actually controlling it. Here’s the thing, while we on the left may think ha ha. Yeah, you got punished for violating the rules. Sure. Uh, this is going to be another case of conservatives crying censorship. They’re going to act like, Oh my God, we’re being oppressed. YouTube is horrible. Now we’ve got to create like a parlor version of YouTube. Um, and they’re going to use this to rally themselves essentially, but that’s not what happened, folks.

You may not like the rules set forth by these companies, but you can thank Republicans for going all the way to the Supreme court and arguing that companies should have the final say on who gets to use their services. So now that it’s coming back to bite conservatives in the , I don’t sorry for them at all, nor am I worried about this. So-called slippery slope we’ve been hearing about for a couple years now that out, they’re going to start demonetizing everybody. Nope. That hasn’t happened. In fact, as best we can tell most content creators on YouTube doing better than ever. If you follow the rules and the rules really aren’t that hard to not break, everybody’s fighting for clicks. Folks. Everybody’s fighting for clicks. Don’t fall into this little censorship war BS, because that is exactly what it is. These are private corporations that thanks to Republicans are allowed to do whatever the heck they want to do.

That is not censorship. That is not a violation of your first amendment, right? These are private companies doing what Republicans fought for them to have the right to do. But now that it’s hurting them, suddenly they become these free speech warriors forgetting the fact that they allowed the laid the foundation for this to even take place right now. So here’s, what’s going to be fun again. This is Trump’s favorite network, the one American news network. So how is he going to freak out? You know, what’s going to be his reaction when he finally learns what’s happening. That is when things are going to get bad. That is when this conservative base is going to be a little more riled up. And that’s when they’re going to start publicly whining about being silenced on the internet. I don’t know where any of this is going to land, but I do know that to claim that YouTube is just suppressing right-wing speech. That’s a lie. There are far more right-wingers out there doing a lot better than those on the left. So don’t come with that BS because that is so easily disproven basically by a quick YouTube search actually.