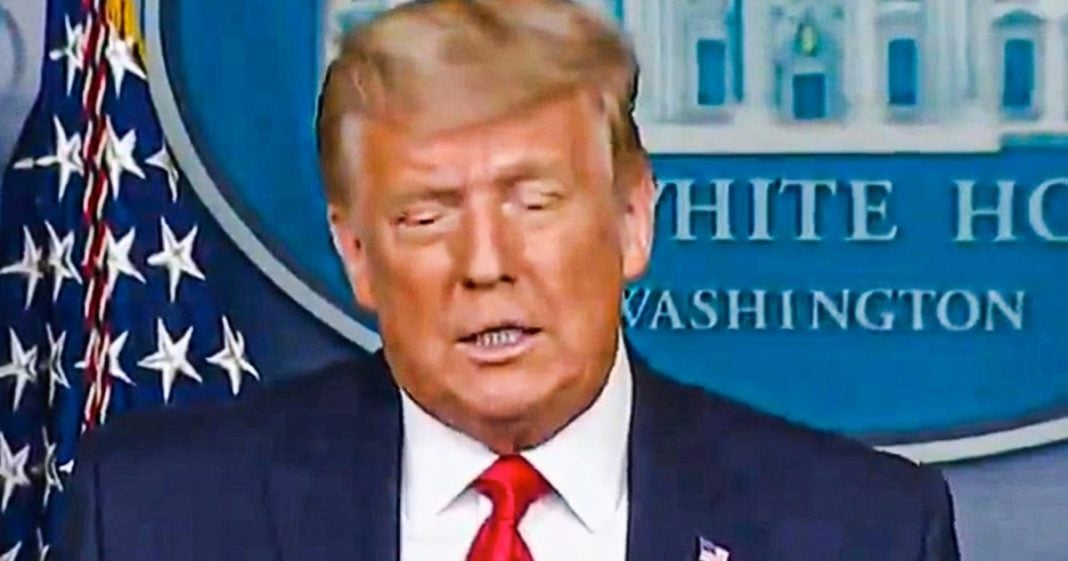 The American public was left a little confused on Tuesday after President Trump walked to a podium in front of reporters, bragged about the stock market crossing 30,000 points, thanked his staff for doing it, and then walked away. People didn’t know what to make of the bizarre performance, other than to point out either how weird it was, or the fact that the stock market surged now that the political turmoil has died down regarding the election. Ring of Fire’s Farron Cousins explains what’s happening.

Yesterday, Donald Trump held a press conference that literally lasted under a minute and he didn’t talk about anything of substance. Like everything he said in this weird press conference should have just been a tweet. But instead, Nope, the white house called all the reporters there, everybody in the pool come get in the room. Oh, here comes the president walking out. Oh, it’s so official. And then, then he did this.

Donald Trump:                    Absolutely incredible. It’s, nothing like that has ever happened medically. And I think people are acknowledging that and it’s having a big effect. But the stock market’s just broken 30,000, never been broken that number. That’s a sacred number, 30,000. Nobody thought they’d ever see it. Uh, that’s the ninth time since, uh, the beginning of 2020. And it’s the 48th time that we’ve broken records in, during the Trump administration. And I just want to congratulate all the people within the administration that worked so hard. And most importantly, I want to congratulate the people of our country because there are no people like you. Thank you very much, everybody. Thank you.

A sacred number, 30,000 folks. That is a sacred number. Of course it’s sacred. When the stock market in money is what you worship. You psychopath for the other half of the country, that doesn’t own a single stock at all. They have no retirement funds tied up in the stock market that jibber Jabber you’re sitting up there spitting means nothing to half the country. In fact, that actually means nothing to more than half the country, because right now we’re facing a really, really severe economic crisis. We’re in the middle of a recession. Uh, 10% of the American public does not have enough food, right at this moment, half the country has experienced food insecurity during this pandemic, uh, tens of millions of people are facing eviction at the end of December. Once the moratorium officially expires and tens of millions of people are about to lose the additional $400 in unemployment payments. They’ve been getting every week that ends the day after Christmas. So do you think any of them give a rats that the stock market hit that sacred number of 30,000? You belong in a padded cell?

So not only was this insensitive during a time of economic hardship for most Americans, it was also just downright weird and bizarre. He walks out there as if he’s going to make some granting. I actually watched it happen line because I thought, Holy crap, is this, is he going to concede? Uh, cause I need to re retool some videos that have been prerecorded. Uh, but now he gets out there starts talking about the stock market, 30,000. He speaks as you just saw for like 40 seconds ish and just walks away. That was it again, that could have been a tweet, hell dude, you could have picked up your phone and been like, Hey everybody, what’s up. It’s president Trump here. We just hit 30,000 and just sent that out to Instagram and YouTube like that didn’t need to be a press conference. You wasted it.

Everybody’s time with that. And again, for an issue that doesn’t even affect half the country, here’s the thing. The president isn’t responsible for what just happened in the stock market. Either the reason the stocks are rallying right now this week is because the transition was finally allowed to move forward. Same thing happens after every presidential election. Typically, uh, when the dust settles, when there is the clear winner, when everybody, you know, dies down their enthusiasm or anger over it, stock market typically rallies stock market is often effected, uh, by state of the union addresses it’s affected by inauguration day. Things like that, always wreak havoc or provide huge benefits for the stock market and essentially allowing a presidential transition after four tumultuous years. Yes, that is going to also send stock soaring, but that’s not because they like you it’s because uncertainty for the moment has gone away. I hope that explains how ridiculous the stupid stock market is folks, because it is just that stupid.