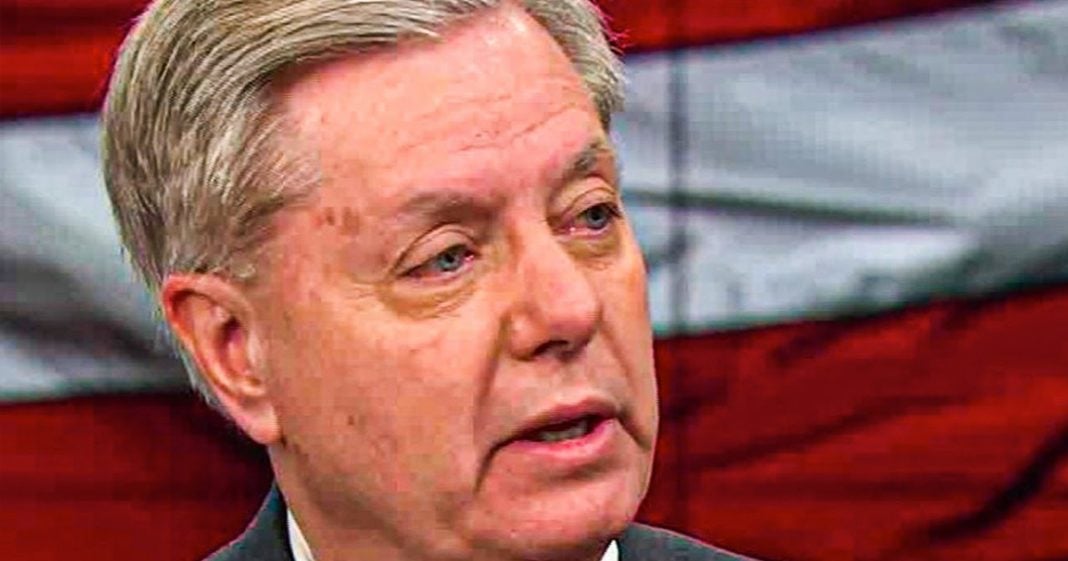 Republican Senator Lindsey Graham loves being a drama queen, and this week he launched into an absolutely demented tirade against Democrats, claiming that Biden, Schumer, and Pelosi were a “trifecta from hell.” Their offense? Trying to make the country more representative by abolishing the electoral college – something that neither of these three have ever said they support doing. Graham made the statement to Sean Hannity, which means the network is moving away from verbally massaging Trump every night to just making up random BS about Democrats. Ring of Fire’s Farron Cousins explains what’s happening.

On Monday night, Lindsay Graham appeared on Fox news with Sean Hannity, where Graham went into this unhinged tirade where he not only insulted his own base and salted their intelligence, but he also claimed that somehow these corporate centrist Democrats that we have that are about to be in positions of power are going to be quoting the trifecta from hell. And they’re going to enact all these wonderful reforms that we actually need as a country. Uh, but none of them have ever said they would. Here’s what Lindsey Graham had to say. If we lose these two Senate seats in Georgia, Pelosi will run the house. Schumer will run the Senate. And if the president falls short and Biden gets to be president, you’re going to have Pelosi, Schumer and Biden. That’s the trifecta from hell for big government. It’s a nightmare for conservatism. It’s the end of checks and balances Such a drama queen.

Graham then claimed the trifecta would change the number of justices on the U S Supreme court from nine to 13, and then eventually abolish the electoral college. Even though Joe Biden has specifically said, he’s not going to do either of those things. Graham continued the winner of the president’s. He would go to the popular vote. That means that South Carolina, Georgia and other States would be basically dealt out in California and New York would pick the president in perpetuity. It would fundamentally change the country. As we know it, you must think your base. You must think the Fox news viewers are crawling around on all fours, eating dirt Dumb. Cause You would have to be that stupid to think that getting rid of the electoral college, which allows just a few States to choose the president is somehow a better system than a popular vote where literally every single vote matters at that point. Lindsay, when was the last time a politician ever traveled to Wyoming to hold a rally or gave a speech?

Do you know? Okay, It’s been decades actually. So the people of Wyoming, a red state, uh, nobody gives a crap about them because they’re just sitting there on what two, three electoral votes yet Penny’s nobody gives a crap. Meanwhile, if you live in Florida or Ohio or Pennsylvania, you’re inundated nonstop trips by these idiots coming into town, ruin and traffic for everybody. But that’s because those are the big prizes, Wisconsin, Michigan too, just stayed, hovering in between all those areas nonstop. I don’t Understand how Republicans don’t understand this because trust me, Lindsey Graham understands that abolishing the electoral college actually makes our government far more representative and that it is a much more fair system. He just also understands that it means these few small States, like the ones mentioned, he said, wooden County more. It just means that those States with lower populations, aren’t going to be able to hold us hostage for their electoral votes. They will still have an equal say, but they won’t be able to hold elections hostage. That is what matters. That’s what they want because that is the only way they win. Yes. If we abolish the electoral college, Republicans are gone for the last 20 years. There has been one election where the Republican won the popular vote. And yet there were three elections where Republicans ended up the winner. And the one where the Republican got the popular vote wouldn’t have been able to happen in the first place.