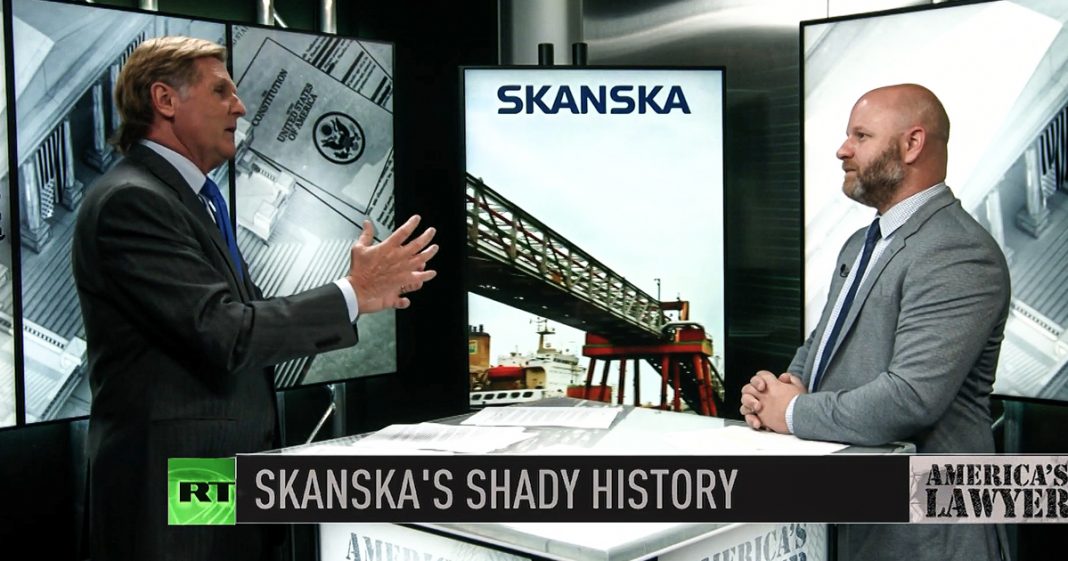 Via America’s Lawyer: Charles Koch is pledging to turn a new leaf after decades of using wealth to fomenting political division. Plus, construction giant Skanska faces a litany of lawsuits related to its Pensacola Bay Bridge which was put out of commission by Hurricane Sally. Mike Papantonio & Farron Cousins discuss more.

Mike Papantonio:             Recently, our hometown, Farron in our hometown, was rocked by the negligence of a company called Skanska. And I think people need to understand how Skanska, a company like Skanska affects towns all over America. Give me the story about Skanska and let’s draw some parallels between how people react to local politics, would you.

Farron Cousins:                  Right. Well, well right here in our town with Skanska, you know, we just had hurricane Sally came through. They’re building a bridge for us. It’s the only way in and out of that town at the moment, unless you want to take a two hour detour. They didn’t secure their barges that they’re using to build the bridge, the barges get loose, they smack into the bridge, they break it. It’s no longer operable. The barges then get washed up into other areas, more destruction.

Farron Cousins:                  Right. And so Skanska says, or Skanska says, yeah, we’re, you know, sorry, but, oh well. Not much we can do. And so we decided, well, well, who is this company? And we look into it and we find out that not only have they been doing similar negligent projects across the United States, they have been found internationally to be paying bribes, to be paying off cartels. I mean, this is an international company.

Mike Papantonio:             Bribery, interaction with cartels, so they can pull off their business. This, this is a, this is a, they’re make, bring in $18 billion a year. It’s one of the biggest construction companies on the globe. They happen to be in Sweden, but they got offices all over the United States. This is the new norm. Skanska is the new disgusting norm. And what’s so bothersome about Skanska, is it never should have happened here in Pensacola.

Mike Papantonio:             Why did it happen? How did, how is it that they had public hearings where Skanska is standing up saying, we want to build your bridge. One, it’s one, it’s a huge bridge, it’s a three, three mile bridge across a massive waterway. And so they stand up, we can do this for you. And oh, by the way, you know, we’re going to be the low bidder and oh, by the way, when you evaluate how they came, as far as, as far as their evaluation in the process of saying, is this the company, or should we, or these other two companies, the company. When they go through that evaluation process, these people on the bottom, of almost everything.

Farron Cousins:                  The city council meetings, the town hall meetings, the things that we think of, oh, no, that’s something people did in the forties. No, they talk about this kind of things. They talk to whoever shows up and they say, this is the company we’re leaning towards. Does anybody have any objections, any problems with this? Anything we should look at? But because most people think that activism is only on a national scale.

Mike Papantonio:             Six or seven people died. But the point is, if nobody shows up at the hearing, you have politicians who are dysfunctional, that are going to just, they, they don’t even, they don’t even take a look, a serious look at anything. That happened with Skanska here.

Mike Papantonio:             You have lawyers working for the department of, in this situation, the department of transportation that signed off on a contract that a flying monkey moron would not have signed off on. But again, we had a responsibility to do something and we didn’t do it. We could have stopped these folks. We could have stopped them in their tracks at that hearing. We, we have businesses that will not be in business a year from now.

Farron Cousins:                  Some of them, right near that bridge, since there’s no longer any traffic and no need to go that way, have already closed their doors. These are businesses, one of them was the first job I ever had when I turned 15. It is gone now.