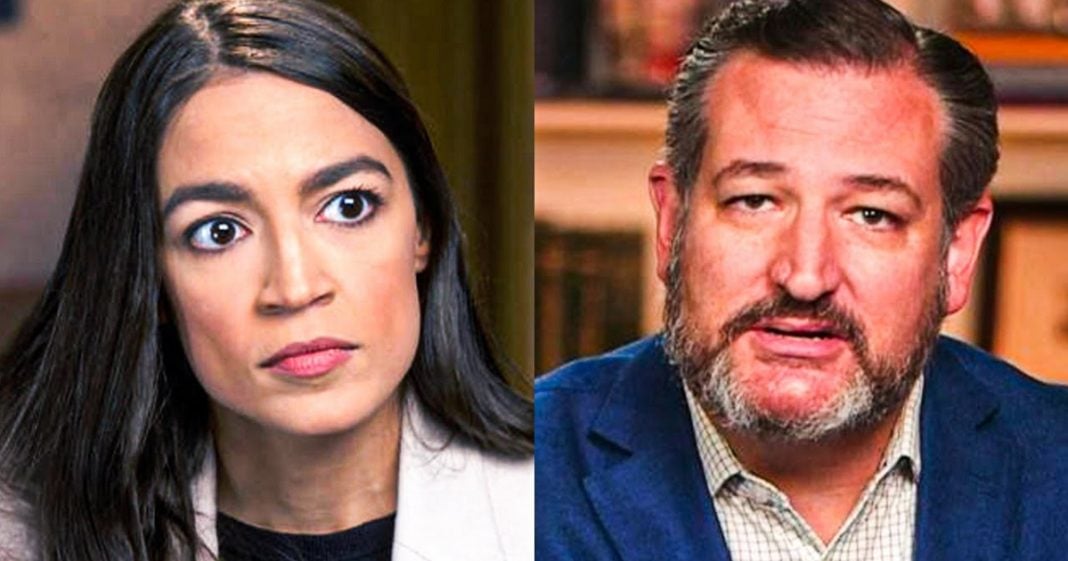 Representative Alexandria Ocasio-Cortez has spent the week calling out powerful Republicans, and some of them are making the grave mistake of firing back at her. Ted Cruz found out the hard way that you can’t bully AOC into submission, and every time Cruz thought he landed a blow against her on Twitter, she was able to hit back even harder. AOC also has the advantage of having facts on her side, unlike Ted. Ring of Fire’s Farron Cousins discusses this.

You know, there’s really one simple rule of Twitter. If you want to start an argument with somebody on that social media platform, you need to make sure they’re not one of two individuals. The first is nation reporter, investigative journalists, uh, Ken Klippenstein, you’re never gonna win a fight against him. He is the best. There is the other person is representative Alexandria, Ocasio, Cortez, who is absolutely one of the best human beings to follow on Twitter. And she is one that the right loves to try to pick on. And every time they do, they fail spectacularly. And I absolutely love watching it happen this week. It was Ted Cruz who frequently a little too frequently tries to insert himself and AOC his business. And, uh, earlier this week after AOC had tweeted out, uh, to Mitch McConnell, she said, you know, people across the country are going hungry. COVID is set to explode. And Mitch McConnell dismissed the Senate last week. I don’t know how these people can sleep at night. I really don’t. So Ted Cruz, even though he wasn’t targeted by that decided I’m going to teach this little lady a lesson. And he came out and he said, why is your party filibustering 500 billion in COVID relief? And Joe, Biden’s cheering them on thinking that blocking relief somehow helps Dems win Georgia.

Now, before we get to AOC response here, smacking Ted down, it’s important to note that what Ted Cruz just said is a lie. Uh, that’s not a thing that’s happening, Ted. And you know it, your just counting on all your idiotic, Twitter followers to be dumb as dirt to not know that that’s not happening. And I’m assuming a lot of them are because they’re still fans of yours, AOC fired back thusly. She said, you know, in the house, when we don’t have the votes to pass something, we work on the bill until we pick up the votes to pass it. That includes GOP votes. And yes, GOP have voted for my legislation to the Senate, should try it. Sometime people are going hungry. As you tweet from vacay, she’s not wrong about that. Ted Cruz sin back enjoying the good life has had far too many breaks this year for not really doing anything other than stacking the courts for Donald Trump.

But that is the kind of brilliant response that we need. One. She taught him something. Hey, if you’re worried about getting people to support your legislation, maybe you need to work with them a little bit on it. Ted Cruz has offered in the past to work with AOC on certain things. Why is he not working with the Democrats? There? Is it because he thinks, I think we all know what it is. I think we know why he is so obsessed with her. I think Ted Cruz got a little crush on AOS really did, but Hey, so anyway, she teaches him something. So that’s the factual part of it. And then she, she gets the zinger in there. Your tweeting while on vacay Millions and millions of people this year, Not able to travel because of COVID. Uh, too many people are traveling by the way, because of COVID or, you know, without regard to COVID, uh, millions of people still without their jobs. So they don’t even have the option of taking a vacay.

They’re just already on it because of your inaction, Ted, they’re wondering how they’re gonna feed their families. They’re wondering what to tell their kids about why they’re not actually having a Thanksgiving dinner this year and Ted Cruz tweets away from his position of power, his position of comfort. And it takes somebody like AOC to come along and call him out on it because that’s what needs to happen. And to be honest, she is not alone. AOC does this Ilana. Omar does it all the time as well. Ayana Presley is out there. Ted Lou does it all the time. RO Khanna is, is also, uh, not afraid to do this, but you don’t have a whole hell of a lot outside of that. Bernie Sanders, obviously, but I’m talking about, you know, the house here, we need more of this. We need more people willing to sit there and call out the Republicans to their face, who won’t back down to. When the Republicans try to back them into a corner, AOC is leading the way on this. And you’ve got others who are right there with her doing a brilliant job of it. And we need more of this because the more you call out there lies the fewer people will be left to believe in them.