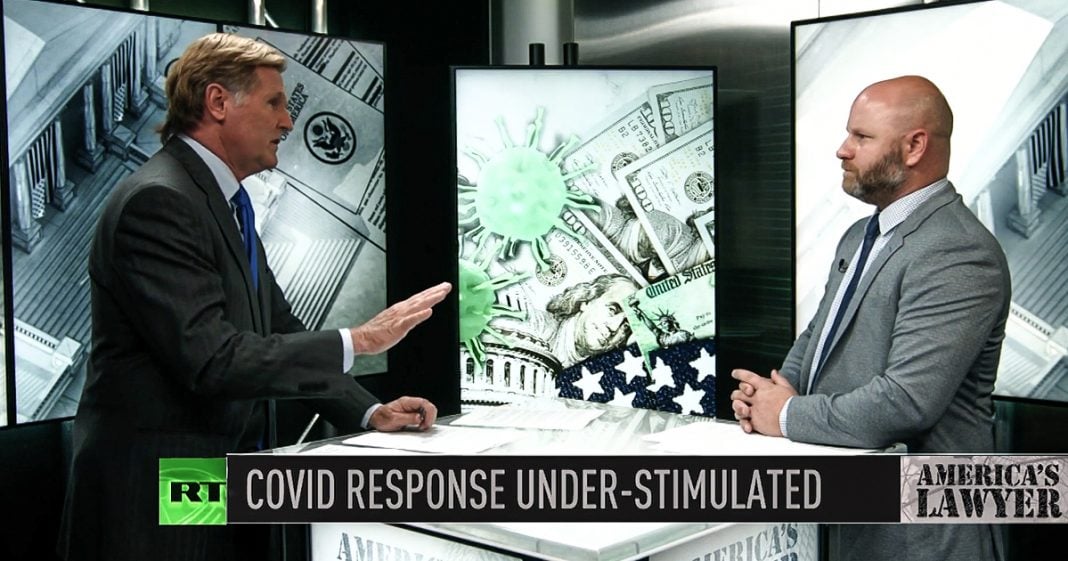 Mike Papantonio:             The pandemic is getting much worse in American and economist are now saying that this could have been largely avoided if Congress had provided more stimulus to the Americans. It’s a story that makes perfect sense. I got Farron Cousins with me to talk about it. Give me the connections, Farron. This is, when you first read the headlines you go, oh, what does stimulus has to do with people dying?

Farron Cousins:                  Well, the answer is, you know, pretty obvious when you think about it. You have all of these people, the, the lower wage Americans, the workers, the average people that weren’t getting stimulus. And so they had to go back to work. A lot of these people in the gig economy, you know, Uber drivers, servers at restaurants, people who otherwise would have stayed home if they’d have had the means. But instead Congress, this, you know, white house, Senate, house of representatives, everybody was so focused on giving billions and billions to corporations, average worker got a one-time $1,200 check to last them for a nine month pandemic. They were forced to go back to work or else they risk losing their homes, you know, losing their vehicles, not being able to pay their bills. So they’re out there on the front lines getting sick now and that’s why we’re seeing such a massive spike because people can’t stay home.

Mike Papantonio:             Okay. So both parties being hugely unreasonable.

Mike Papantonio:             The Democrats want $3 trillion, the Dem, the republics are gonna say that’s, that’s too much. The Democrats want to use it for all of their pet projects. The Republicans do too. And while that’s going on, your point is that the average guy is just, I got to go to work.

Mike Papantonio:             And if I have to go to work, I’m going to go to work and I’m gonna expose people if, even if I’m sick, there are cases with that, where we know workers are showing up, they have to pay their mortgage. They got to put food on the table. They’re sick and they’re spreading it anyway. That’s kind of where you’re landing on this, isn’t it?

Farron Cousins:                  Yeah, absolutely. And we’ve seen it, you know, the meat packing industry is one of the worst examples out there. These people could have stayed home, or they could have said, listen, you’re not going to force me to come back. I’ll find something else. But they had no safety net. They had no cushion in the form of monthly stimulus payments. They had to go there. And what we saw in the early early days of this were just massive outbreaks, tons of people dying in these packing plants because they had to.

Mike Papantonio:             You and I have covered the meat packing problem at least three times.

Mike Papantonio:             And so this isn’t guesswork. It’s not speculation. I’m so damn tired of the politics involved here, leading up to the election. You know, the Democrats were gaming the system, Republicans were gaming the system. Mitch McConnell said, there’s not going to be any movement at all. And while that’s happening, your theory and the theory of many, many economists that have looked at this and says, there’s a direct relationship between you holding this money up and the spread of the virus. Haven’t we?

Farron Cousins:                  Well, well and you’ve got Mitch McConnell who still refuses to have it. And yet he called the Senate back this week to vote on six new judges for lifetime appointments.

Mike Papantonio:             Has put these, put as many of these folks, and actually, you know, depending on how Georgia goes, I’m not convinced they still can’t put, continue pushing judges. You know, we have, you’re going to have three or four Democrats that say, ah, okay.

Mike Papantonio:             We saw it with the Obama administration. Nothing really changes there, does it?

Mike Papantonio:             President Donald Trump has fired several top officials at the department of defense. The latest shakeup could impact US foreign policy during an already tumultuous presidential transition period. I’ve got Brigida Santos to talk about this. Brigida, first of all, which of, which officials have been fired from the DOD in recent weeks and, and, and why?

Brigida Santos:                   Well, president Trump has fired defense secretary Mark Esper, and replaced him with national counterterrorism center director, Christopher Miller. Trump and Esper have not always seen eye to eye on the issues. Most notably on deploying active duty troops to monitor civil unrest during the George Floyd protests. They’ve also disagreed over Espers policy to ban Confederate flags on military installations, which Trump sees as a violation of free speech. And in response to Espers firing, Espers chief of staff, Jennifer Stewart has resigned along with the Pentagon’s acting policy chief, James Anderson, and the undersecretary of defense for intelligence, Joseph Kernin.

Mike Papantonio:             Well, you know, has the president indicated whether he’s going to fire anyone else before leaving office? Is this a trend that we can expect as, from this lame duck president who says, paybacks are hell guys. What do you think?

Brigida Santos:                   Yeah, several white house officials say president Trump could soon fire CIA director, Gina Haspel, and FBI director, Christopher Wray over internal disagreements. While firing this many national security bureaucrats during a presidential transition period is unusual, firing people is nothing new for Donald Trump. Remember during his four year term, the US has seen four acting secretaries of defense, Jim Mattis, Patrick Shanahan, Mark Esper, and now Christopher Miller. There have also been shakeups in other cabinet positions, including the secretaries of state, health and human services, energy, Homeland security, and so on. So this is very on brand for the president. And just because we’re in this transition period, doesn’t mean he’s going to act any differently. In fact, we’re seeing him ramp it up.

Mike Papantonio:             So the signaling is for example, you know, I applauded him when we got our troops out of Germany. I applauded him when we drew down on Af, on Afghanistan, for bringing the troops home. Now you have a totally different scenario. You’ve got Biden who already is appointing Warhawks, you know, the people from the weapons industry, they’re now moving. He’s saying these are the people that are going to be in charge, the same people who started, you know, Wars under Obama. And, and so the, the point, the point is, is it him taking his last, his last effort to slow that down? My, my estimation is probably not, it’s all personal. But how might personnel changes impact US foreign policy in, in Trump’s final months as president? It’s, there’s no question that this is payback time, but the other part of it is the policies that he wants to make sure happen. He wants to draw down troops. He doesn’t want people on what he considers the, you know, the el, elite Washington insiders, keeping us in war, keeping troops overseas. So it’s a, it is a real mission of his. But I can’t help but think he’s dressing it up, at the end of the day, it’s, it’s, it’s kind of paybacks, isn’t it?

Brigida Santos:                   Sure it’s all political, of course. You know, many officials say that they worried Espers firing would leave the US vulnerable during a presidential transition period and erode civilian leadership of the military. Other officials also expressed concerns that president Trump would withdraw all American troops from Afghanistan by Christmas. Now Trump has long promised his supporters that he’d end America’s longest running war. This shakeup could allow him to do that in his final months, even if it pisses off the Democrats. Now he’s already announced plans to withdraw 2,500 troops from Afghanistan and Iraq since Espers ousting. And rather than seeing this as a shift away from forever Wars, as you said, congressional Democrats and military industrial complex insiders say the draw down could make the Biden administration look bad if it turns around and re-deploys troops to Afghanistan in the future, which it is indicating that is something that it would do. But Trump is no Saint here. You know, he’s partnered with Saudi Arabia and given them tons of weapons to bomb and starve civilians in Yemen. So this is absolutely political, but we might see us get out of that Afghanistan war, even if just temporarily.

Mike Papantonio:             We need to be out of Afghanistan. If we were to say, okay, let’s, let’s at least say this guy did something, right, it’s the draw down of troops. If Biden, again, Biden is surrounding himself with Warhawks, they’re hugely from the weapons industry. He’s going to turn, he’s going to start turning that heat up. We’re going to see re-deployment of troops. But you’re right, when he does that, it is a wake up call to the American public is, is this the democratic party getting us involved in more Wars? So he has a purpose and that is obviously one of his purposes. Brigida, thank you for joining me. Okay.