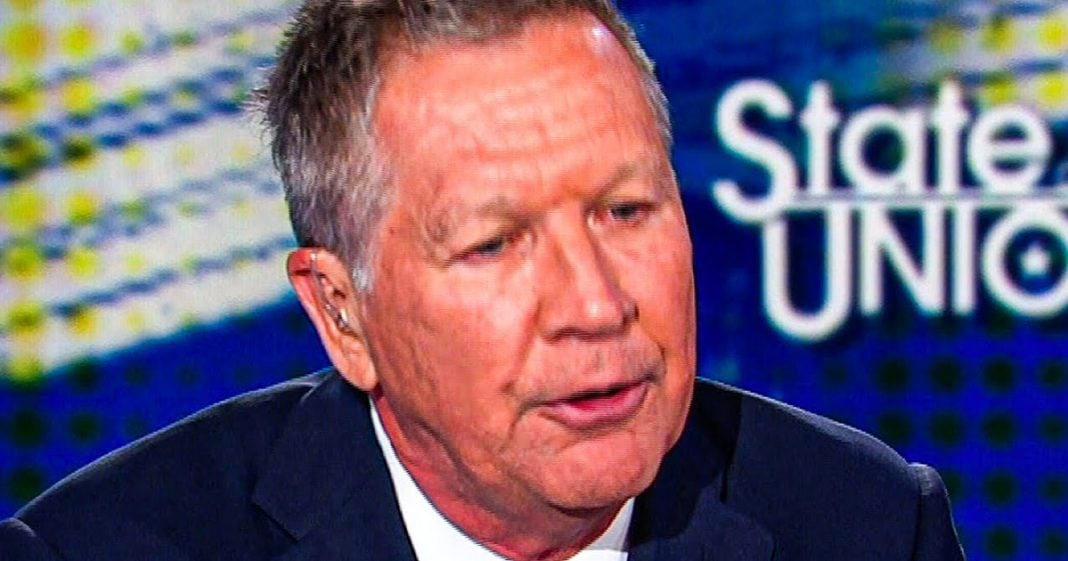 Former Republican governor John Kasich says that he is SHOCKED that Republicans aren’t demanding Trump concede the election and stop destroying our democratic processes. Kasich clearly hasn’t been paying attention to the Republican Party for the past few decades, including his own actions as a leader within the Party. Ring of Fire’s Farron Cousins discusses Kasich’s phony outrage and why we shouldn’t be fooled.

Who would have thought that the former governor of Ohio who signed one of the most restrictive abortion bills into PA in the law and also destroyed unions and also help suppress the vote in his state, who would have thought he would have been shocked by what the Republican party is doing today? The only thing shocking about this is the fact that the Huffington post ran with the headline that said, John Kasich stunned, GOP. Isn’t defending democracy against Trump. This is why the Huffington post is trash. Now that was their headline. How can you write an article like this? How can you pretend that John Kasich is a friend of the democratic party without calling out his horrid history and acting like the GOP has an always been horrible for real. I know the democratic party is not great. Trust me. We’d go after him all the time, but to sit there and pretend that the Republican party hasn’t been horrible for the lifetimes of most people in this country at this point, I’m not 40. Uh, so yeah, for my entire life, the Republican party has been pretty bad. Pretty much. If you were born in the Nixon era or after the Republican party has been trashed for at least your entire lifetime, they have been corrupt. They have been incompetent and they have been dangerous liars.

That’s the Republican Party that we’ve grown up. That’s what you’ve been for our entire lifetime. And we shouldn’t expect anything different from you. In fact, we don’t, I don’t expect anything different from John. Kasich what John Kasich is doing right now is trying to separate himself from the pack. He is trying to go out there and say, listen, I’m not like them. I’m one of the good ones. Trust me, vote for me, forget about all those horrible things. I didn’t Ohio. Cause you know, that puts me literally on the same level of all as all these other Republicans, but you know, forget all that. And I’ll see in 2024, that’s the real message John Kasich was sending in this interview and it’s pathetic that Huffington post didn’t pick up on that.