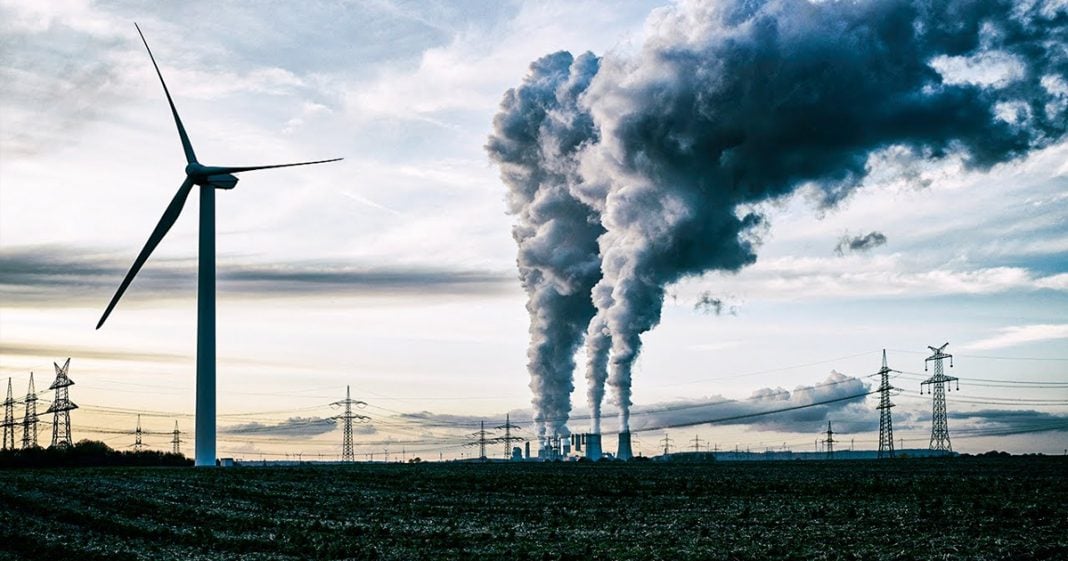 There are plenty of issues where there may not be a lot of daylight between Democrats and Republicans, but taking action on climate change is one where the differences couldn’t be further apart. And that alone may be the sole bright spot from a Biden administration. According to the latest reports, atmospheric CO2 levels continued to rise in 2020, even with lockdowns. We have to take action, and Biden can lead the way or let us slip further behind. Ring of Fire’s Farron Cousins discusses this.

It is now been a little over two years since we got the reports telling us that we had 12 years to reduce our emissions and reduce the overall atmospheric buildup of greenhouse gases in order to prevent some of the worst effects of climate change from being seen right here on planet earth, two years have passed. No action has been taken here in the United States. And if anything, we’ve gone backwards now, believe it or not, there was actually one bright spot this year. And that was the fact that emissions did decrease because of the global economic slowdown. Thanks to the lockdowns from COVID-19. I mean, if you had to put a happy face, I guess, on a global pandemic, it would be that we finally got to see in a spectacular way, the benefits of reduced carbon, and we saw it within weeks. Skies were clearing up in areas where they’d been covered with Smaug for God knows how long, you know, the waters in Venice clearing up for the first time in ages, we saw the impact that human beings were had and how quickly we can fix things.

That’s a message of hope. But unfortunately this week, the United nations, uh, world meteorological organization gave us a reason to not be so hopeful, unfortunately, because they said even with the global economic slowdown and the slight reduction in overall emissions, atmospheric CO2 still increased this year. We’re still emitting too much. And we’re down to 10 years a solid decade. But again, I have to say that what we saw the, the massive environmental improvements that we saw in a matter of days, or even just weeks, that was tremendous. We can see what this world can be like. We got, we got a taste of it and everybody should be hungry for more of that. I don’t understand how you couldn’t be. We have the technology, we can do this. Yeah, it might be painful. At first. It might be tough to transition people to go from working in the fossil fuel industry, to the renewable energy industry.

But we can do that. If we have a federal jobs training program, which we could easily implement, we can do that. We can shift people from here to there. Nobody’s losing jobs. Nobody loses economic activity. The only people who suffer from this are the fossil fuel CEOs. Who’ve lied to us for decades about climate change. And I am okay with that. You should be too. Other than that, nothing changes. These people still have jobs. They have good paying jobs, jobs that are going to be around a heck of a lot longer than their fossil fuel jobs. The coal industry is already dying if not half dead. And they don’t have to worry about the toxic that they would be subjected to every day. I think that’s a win, win, win for everybody involved. Now here’s the only bright spot, uh, to this new report that emissions still went up.

And that is Joe Biden is about to be president of the United States. Now I know he’s going to have a couple of fossil fuel people in this cabinet. That’s disappointing and it’s sad, but you have to take the small victories where you get them. Joe Biden, excepts. The climate change is real. He understands that science is not being manipulated to make it seem like a problem when it’s not, he knows it’s real. And he is going to do things. We’ll have to wait and see the extent of it, but he is going to take action on it. And any action at this point is better than four years of moving backwards on it. Trump increased our emissions. He increased the kinds of toxic materials in our air. Why just because Obama had limited them. So at the very least, we’re not going to have environmental policy done simply out of spite. That’s a win for the United States. Maybe it won’t be enough, but at this point we can’t afford to continue moving backwards. And that is the one area that 100% is night and day between Democrats and Republicans.