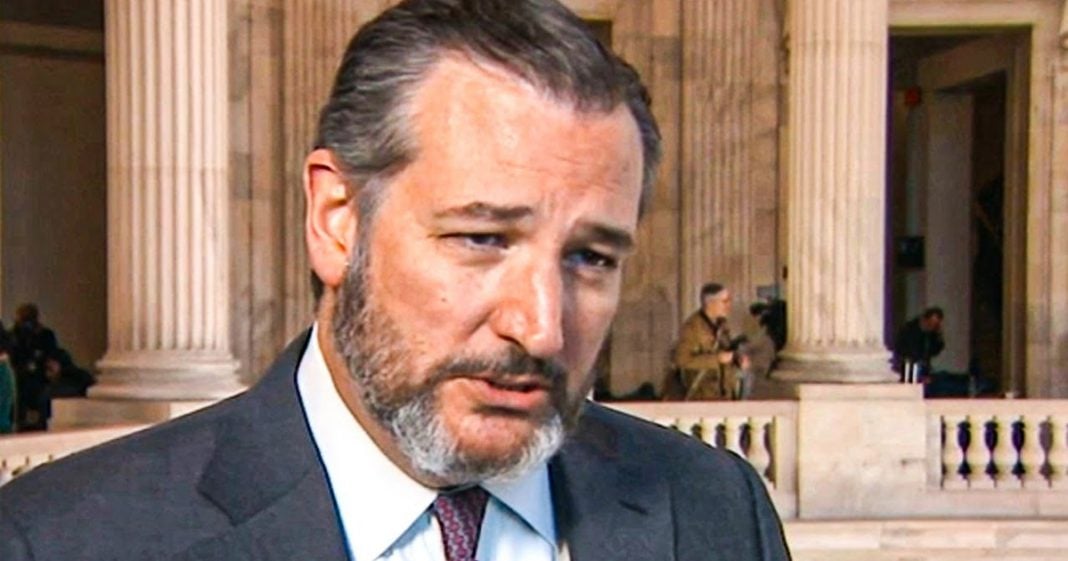 Republican Senator Ted Cruz knows how to manipulate a crowd better than almost anyone, and he spent the weekend fighting against the fictitious “War on Thanksgiving”. At the same time, his home state of Texas is experiencing massive food lines to help needy citizens and the National Guard has been called in to help sort the bodies from their COVID-19 death toll. Ring of Fire’s Farron Cousins explains what’s happening.

In order to succeed in today’s Republican party, you have to know how to whip up a crowd, right? You’ve got to be able to create that frenzy. And typically you have to do it about an issue that nobody would otherwise care about. You know, Trump was able to do it with this, you know, fear of these immigrants coming over, doing things that statistically weren’t actually happening, but he was able to highlight one or two cases and make it seem like it was happening to every single person in the country. Ted Cruz is now doing it with Thanksgiving, Cruz, like many other Republicans are trying to capitalize on this show called war on Thanksgiving that allegedly the liberals are waging, even though the liberals don’t control the, uh, agencies, who’ve said, please, for the love of God, don’t travel this week. Uh, nevertheless, Ted Cruz tweets out over the weekend, a black and white drawing of a Turkey with a star above it.

And the caption says, come and take it, you know, reminiscent of the, uh, you know, second amendment stuff, come and take it. You come and take our turkeys. Ted Cruz got roasted much like a Turkey for this, uh, because it was completely idiotic. Ted Cruz is trying to direct Texans angers towards the fact that the CDC, that the, uh, department of health and human services are begging people, please don’t travel this week. The pandemic is at its worst level ever. Hospitals in some States are at capacity. And if you don’t think that that’s important because I see a lot of people tweeting out the dose routes like 99 point or survivability is 99.4%. So with the murder, here’s why it matters dumb asses. If a hospital’s at capacity, do you know what that means for somebody who I don’t know, has a heart attack gets in a car, accident, breaks a bone.

Do you know what that means for them? That means they have no where to go because your had to go to Outback for a few nights, right? Because you wanted to go hang out with your buddies because you wanted to have a party because you wanted to have Thanksgiving. You weren’t willing to make any personal sacrifices. And now people are going to die. Who otherwise wouldn’t be dying because you’re stuck in the hospital on a ventilator because you couldn’t follow simple instructions. And Ted Cruz is feeding that with his idiotic tweet in his stupid little picture, come and take it, come take our Thanksgiving. You know what, Ted, why don’t you focus on the problems that Texas is having right now? Right? They have had to call in the national guard into Texas to help them process the bodies of the people who were dying from COVID-19 in Texas, because there’s so many of them, the morgues are overwhelmed. So not only are hospitals being overwhelmed, but at this point, so many people are dying from this rarely food illness that the morgues are overwhelmed to the point where the frickin national guard has to come in to help process the bodies.

If that’s not enough to terrify you, how about the economic impact what’s happening in Texas down there while I’m sure we all remember a week ago, right? Those food lines that stretched for miles and miles and miles, people waiting for hours just to get a 25 gift card, a $25 gift card for food. And then a couple of non-perishables in a box. And the told, sorry, it’s all we have is that’s what they got. We’ve seen the pictures. We know what’s really happening down there in Texas, Ted. And you would rather misdirect the public with this fictitious war on Thanksgiving. Why? Because you can’t speak to the other issues. As I mentioned last week, when Charlie Kirk went in his little tirade about the war on Thanksgiving, people talk about culture, war issues. When they can’t talk about real issues. When they have nothing to say about the economy, when they have nothing to say about public health, when they have nothing to say about actual policy and actually doing something to help people, what do they do?

They fall back onto their culture, war BS, which is exactly what Ted Cruz and the majority of Republicans are doing right now. They’re the ones that were in charge during this pandemic. They’re the ones controlling the Senate, preventing any additional aid from reaching American citizens. They’re the ones controlling the white house. And they’re the ones trying to convince you that the biggest issue this week is that you may not be able to have Thanksgiving with your family. There’s a lot of people this week, by the way, who won’t be having Thanksgiving with their families. You know why? Because they died because of the Republican mishandling of this pandemic.