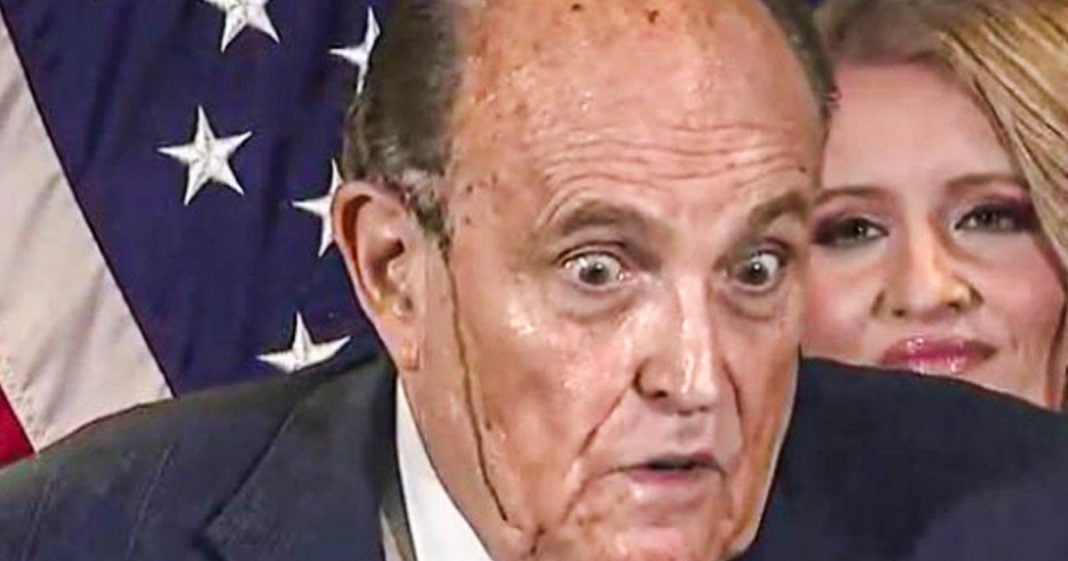 A Republican judge on Saturday evening dismissed a campaign lawsuit from Donald Trump’s legal team – the case that was actually argued by Rudy Giuliani himself – and mocked the legal team in the ruling. The judge said that the legal team hadn’t even formed an actual coherent argument, let alone the fact that they couldn’t provide any evidence. Ring of Fire’s Farron Cousins discusses this ruling.

On Saturday evening, judge Matthew bran, a Republican judge who was appointed by Barack Obama, but he is a Republican. Nevertheless finally issued a ruling on whether or not he was going to allow Rudy Giuliani use case to succeed. You see, before I tell you about that ruling, let me back you up a couple of days here last week, Rudy Giuliani walked into a courtroom in the state of Pennsylvania, gave an argument of sorts and, uh, essentially it all boiled down to you. Can’t allow the state to certify the votes of almost 7 million people, because we have heard reports that some Trump voters had a difficult time boating.

Now, what I just said is far more succinct and clear, although equally as stupid as what Giuliani actually said in court, but that was his ultimate claim. And judge Matthew bran, wasn’t having it in his ruling. He repeatedly mocked and then actually tried to correct. And then mock his correct argument that the Trump lawyers could have made see at the bottom line of brand’s ruling was that the, uh, Republicans Giuliani and all of, uh, Trump’s people, they came into court and they didn’t actually have an argument. What he said they did was, uh, well, I’ll read his own words here. He said, uh, this claim like Frankenstein’s monster has been haphazardly stitched together from two distinct theories in an attempt to avoid controlling precedent, to put it in other way, you just took a bunch of different, random thoughts and you put them together and said, here’s my legal argument.

Yay. And it made no sense. And then he goes on to say, furthermore, one would think when you came to my courtroom with these claims, you would have something to back it up, right? You know, you got to have this overwhelming amount of evidence. Cause you, you say you do, do you go out there and you tell the press, you have it. Kaylee McEnany white house press secretary holds up a binder that she swears is filled with not blank pages that she says, this is evidence, but nobody’s given them the evidence. And judge bran is sick of it. And he got off and his anger came through in the ruling. Here’s another part that’s just too good to not read. One might expect that when seeking such a startling outcome, a plaintiff would come, formidably armed with compelling legal arguments and factual proof of rampant corruption, but that has not happened.

Instead. This court has been presented with strained legal arguments without merit and speculative accusations. Uh, unpled in the operative complaint, ends unsupported by evidence to put it in another way. You don’t have a case. Get the hell out of my court room. Now, as I mentioned, judge, Matthew is a Republican. Although he was appointed by a Democrat, he was appointed by Barack Obama. We know he was Republican because at the time of him being appointed, he was actually serving in leadership positions within the Republican party. So in case you were thinking that Democrats were going to take over the white house and put better judges in place. Uh, this is the kind of people they pick. And sure, this is a great ruling, still a Republican right wing judge though. So go ahead and throw that argument out the window too, but that’s a conversation that we’ve had a million times here on ring of fire.

And if you don’t know it by now, I don’t think you’re ever going to know it. The bottom line is this, the judges are getting . Like they’re not just getting annoyed anymore as they were last week in their rulings. And you could start to see it. If you read the, the rulings that came out now, they’re getting angry. Now they’re getting perturbed and now they’re ready for all of this to be over as is the rest of the country. They do not have a legal leg to stand on. And Rudy Giuliani is going into court flailing around admitting that he doesn’t know meanings of certain words. What was it? Uh, uh, strict scrutiny. Oh my God. No wonder this man. And it hasn’t been trusted to try a case in what was it? 27 years. Yeah, this is going down in flames and it’s going to be remembered as one of the most pathetic and idiotic and biggest failures of a coup attempt in the history of mankind.