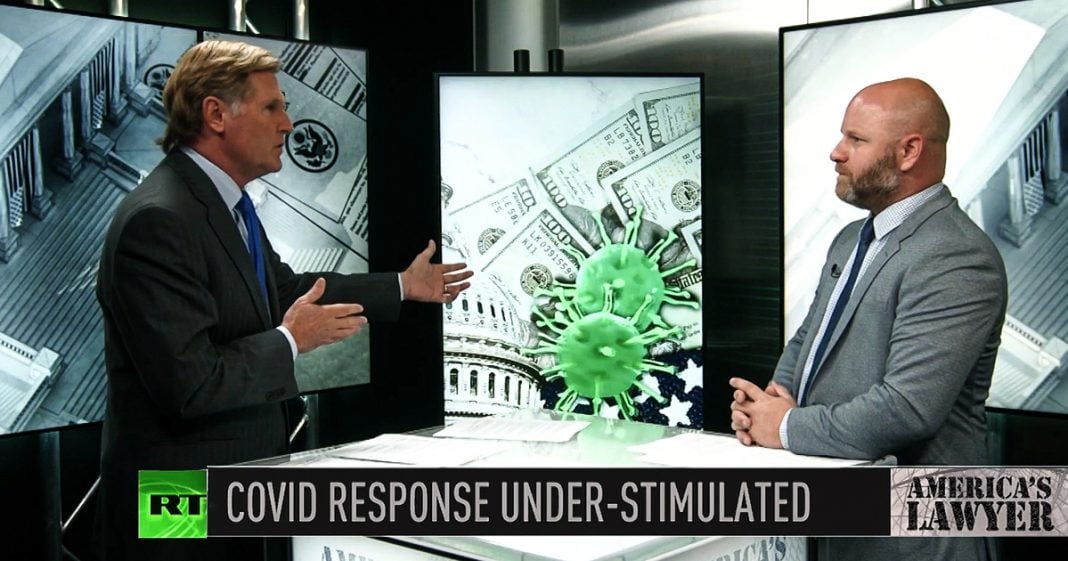 Mike Papantonio:             The pandemic is getting much worse in American and economist are now saying that this could have been largely avoided if Congress had provided more stimulus to the Americans. It’s a story that makes perfect sense. I got Farron Cousins with me to talk about it. Give me the connections, Farron. This is, when you first read the headlines you go, oh, what does stimulus has to do with people dying?

Farron Cousins:                  Well, the answer is, you know, pretty obvious when you think about it. You have all of these people, the, the lower wage Americans, the workers, the average people that weren’t getting stimulus. And so they had to go back to work. A lot of these people in the gig economy, you know, Uber drivers, servers at restaurants, people who otherwise would have stayed home if they’d have had the means. But instead Congress, this, you know, white house, Senate, house of representatives, everybody was so focused on giving billions and billions to corporations, average worker got a one-time $1,200 check to last them for a nine month pandemic. They were forced to go back to work or else they risk losing their homes, you know, losing their vehicles, not being able to pay their bills. So they’re out there on the front lines getting sick now and that’s why we’re seeing such a massive spike because people can’t stay home.

Mike Papantonio:             Okay. So both parties being hugely unreasonable.

Mike Papantonio:             The Democrats want $3 trillion, the Dem, the republics are gonna say that’s, that’s too much. The Democrats want to use it for all of their pet projects. The Republicans do too. And while that’s going on, your point is that the average guy is just, I got to go to work.

Mike Papantonio:             And if I have to go to work, I’m going to go to work and I’m gonna expose people if, even if I’m sick, there are cases with that, where we know workers are showing up, they have to pay their mortgage. They got to put food on the table. They’re sick and they’re spreading it anyway. That’s kind of where you’re landing on this, isn’t it?

Farron Cousins:                  Yeah, absolutely. And we’ve seen it, you know, the meat packing industry is one of the worst examples out there. These people could have stayed home, or they could have said, listen, you’re not going to force me to come back. I’ll find something else. But they had no safety net. They had no cushion in the form of monthly stimulus payments. They had to go there. And what we saw in the early early days of this were just massive outbreaks, tons of people dying in these packing plants because they had to.

Mike Papantonio:             You and I have covered the meat packing problem at least three times.

Mike Papantonio:             And so this isn’t guesswork. It’s not speculation. I’m so damn tired of the politics involved here, leading up to the election. You know, the Democrats were gaming the system, Republicans were gaming the system. Mitch McConnell said, there’s not going to be any movement at all. And while that’s happening, your theory and the theory of many, many economists that have looked at this and says, there’s a direct relationship between you holding this money up and the spread of the virus. Haven’t we?

Farron Cousins:                  Well, well and you’ve got Mitch McConnell who still refuses to have it. And yet he called the Senate back this week to vote on six new judges for lifetime appointments.

Mike Papantonio:             Has put these, put as many of these folks, and actually, you know, depending on how Georgia goes, I’m not convinced they still can’t put, continue pushing judges. You know, we have, you’re going to have three or four Democrats that say, ah, okay.

Mike Papantonio:             We saw it with the Obama administration. Nothing really changes there, does it?