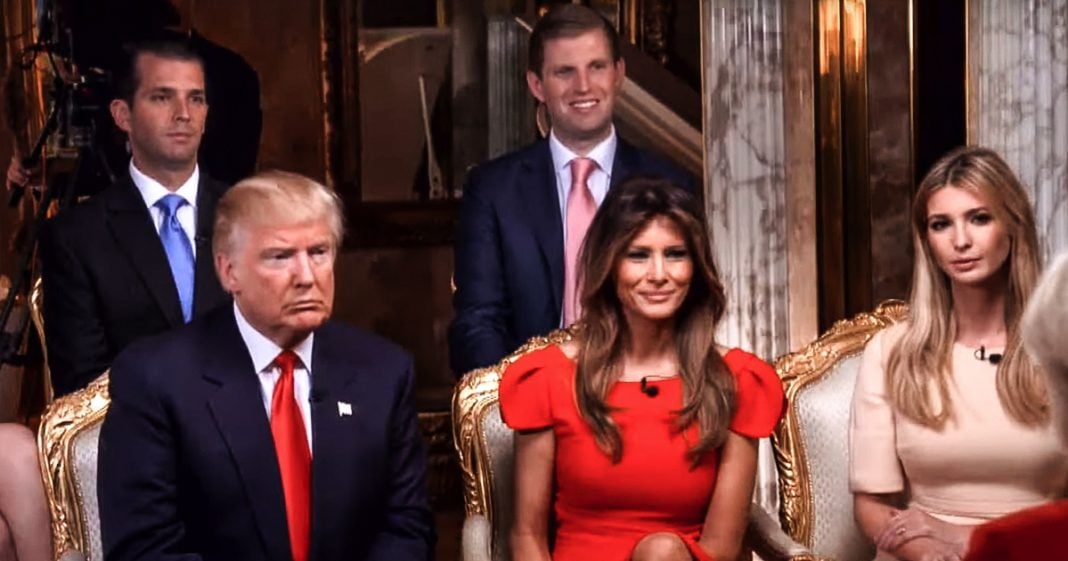 According to a new report by The Wall Street Journal, Trump and his children are facing a major cash flow problem once he leaves office, and the company might actually be forced to sell off multiple properties in order to stay afloat. The problem is a combination of both major debts coming due and a reluctance of financial institutions to lend to Trump because of his history. Ring of Fire’s Farron Cousins discusses this.

According to a new report from the wall street journal, the Trump family, uh, Donald Trump, Don jr. Eric Ivanka. You know, the ones who run the Trump organization, they’re actually facing once Trump daddy, president leaves, office, they’re facing a major a what they’re calling a cash crunch. And that means that even though the organization may be wealthy, they are cash poor. Um, a lot of people, myself included are very familiar with that, you know, on paper. Sure. You got a decent income things look great, but your cashflow poor, meaning all your money is already tied up into other things, you know, uh, debts, things like that. And, uh, that’s the problem. According to the wall street journal that the Trump organization is facing the problem with that. And I had actually predicted this two weeks ago, I said, this exact thing would happen. And now it’s being confirmed that it’s happening.

The problem with this is that they got hundreds of millions of dollars in debt that is coming due within months of Donald Trump, no longer being president of the United States, they have to pay those debts. Banks are not willing to lend them more money to pay off those debts, which is kind of what typically happens at the debt cycle that these massive corporations create for themselves because they don’t necessarily need to pay it off because they have the credit to be able to get the loan, to pay off that loan. Then they get a loan to pay off this loan in LA and around, around it goes, eventually they pay it off. They paid down whatever, but they don’t have to do it immediately. But Trump well, because even before he became president banks, weren’t exactly willing to lend him money. That’s why he had to go to these overseas banks, Deutsche bank, but after watching the scrutiny, and this has also been reported and the recent weeks, uh, watching the scrutiny that Deutsche bank has received, they’re not willing to extend the deadlines on his loan or, or Linden more money.

Other banks are looking at this saying, well, we don’t want to have to turn over all our stuff to investigators. So we’re not going to touch him. So he only has one option. And this is what I predicted a couple of weeks ago and it’s coming true. He has to sell stuff. When you’re in the real estate business, your money is tied up in buildings. That’s, that’s what happens. You sell it or you rent it, whatever you’re doing. Uh, and then you get money and then you use that money. You go do the other thing. And then you use the same thing here and you get money and you go do more and you’re blah, blah, blah. But your money is always basically tied up except for what you’ve taken out as a profit. And what you’ve taken out as a profit is now in your pocket, in your bank account, you’re not going to use that to pay off your company’s debts.

And so you ended up having to sell your buildings right now, Donald Trump and the Trump organization, uh, have multiple buildings up for sale, including the DC, by the way, it’s for sale. They just can’t afford it. They have multiple properties that they are co-owners of, uh, skyscraper in New York, one in San Francisco for sale. Please, somebody come by this building, we need the cash to pay off the nuts. If they do not pay off these debts as the wall, a wall street journal, excuse me, uh, reports. You’re going to start looking at some seizures. You know, the mankind where they come and say, well, you know, it was $400 million. We’re within our legal right to take $400 million from you. And if it’s all tied up in real time state, we’ll take it that way. Cash check or building, whatever it is, we’re getting our money. Zach that’s in the agreement that you signed. So will they are within their rights. If he is unable to pay the that’s, by the time they come due to start taking his buildings away from him. And then again, as I predicted, because we’ve seen this happen in areas before think Panama, they ceremoniously tear down that Trump name off the building, smash it to bits. That would be a fitting end to the Trump legacy. And if these reports are to believe, it’s a lot more likely than a lot of people think.