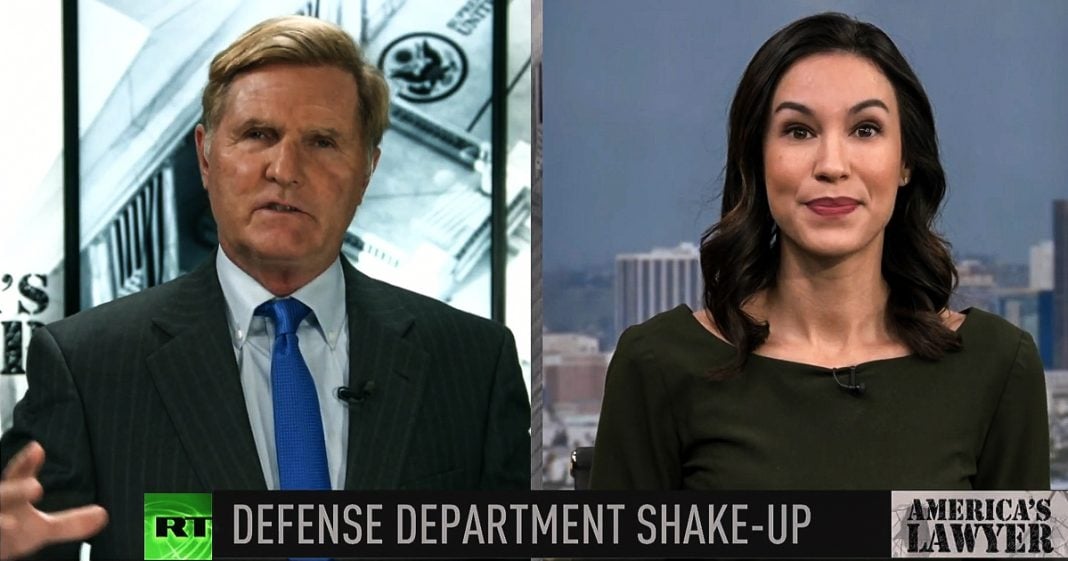 Via America’s Lawyer: RT Correspondent Brigida Santos joins Mike Papantonio to discuss Trump’s firing of defense secretary Mark Esper. What does this mean for U.S. foreign policy moving forward, and who else will be on the president’s chopping block during his final months in office?

Mike Papantonio:             President Donald Trump has fired several top officials at the department of defense. The latest shakeup could impact US foreign policy during an already tumultuous presidential transition period. I’ve got Brigida Santos to talk about this. Brigida, first of all, which of, which officials have been fired from the DOD in recent weeks and, and, and why?

Brigida Santos:                   Well, president Trump has fired defense secretary Mark Esper, and replaced him with national counterterrorism center director, Christopher Miller. Trump and Esper have not always seen eye to eye on the issues. Most notably on deploying active duty troops to monitor civil unrest during the George Floyd protests. They’ve also disagreed over Espers policy to ban Confederate flags on military installations, which Trump sees as a violation of free speech. And in response to Espers firing, Espers chief of staff, Jennifer Stewart has resigned along with the Pentagon’s acting policy chief, James Anderson, and the undersecretary of defense for intelligence, Joseph Kernin.

Mike Papantonio:             Well, you know, has the president indicated whether he’s going to fire anyone else before leaving office? Is this a trend that we can expect as, from this lame duck president who says, paybacks are hell guys. What do you think?

Brigida Santos:                   Yeah, several white house officials say president Trump could soon fire CIA director, Gina Haspel, and FBI director, Christopher Wray over internal disagreements. While firing this many national security bureaucrats during a presidential transition period is unusual, firing people is nothing new for Donald Trump. Remember during his four year term, the US has seen four acting secretaries of defense, Jim Mattis, Patrick Shanahan, Mark Esper, and now Christopher Miller. There have also been shakeups in other cabinet positions, including the secretaries of state, health and human services, energy, Homeland security, and so on. So this is very on brand for the president. And just because we’re in this transition period, doesn’t mean he’s going to act any differently. In fact, we’re seeing him ramp it up.

Mike Papantonio:             So the signaling is for example, you know, I applauded him when we got our troops out of Germany. I applauded him when we drew down on Af, on Afghanistan, for bringing the troops home. Now you have a totally different scenario. You’ve got Biden who already is appointing Warhawks, you know, the people from the weapons industry, they’re now moving. He’s saying these are the people that are going to be in charge, the same people who started, you know, Wars under Obama. And, and so the, the point, the point is, is it him taking his last, his last effort to slow that down? My, my estimation is probably not, it’s all personal. But how might personnel changes impact US foreign policy in, in Trump’s final months as president? It’s, there’s no question that this is payback time, but the other part of it is the policies that he wants to make sure happen. He wants to draw down troops. He doesn’t want people on what he considers the, you know, the el, elite Washington insiders, keeping us in war, keeping troops overseas. So it’s a, it is a real mission of his. But I can’t help but think he’s dressing it up, at the end of the day, it’s, it’s, it’s kind of paybacks, isn’t it?

Brigida Santos:                   Sure it’s all political, of course. You know, many officials say that they worried Espers firing would leave the US vulnerable during a presidential transition period and erode civilian leadership of the military. Other officials also expressed concerns that president Trump would withdraw all American troops from Afghanistan by Christmas. Now Trump has long promised his supporters that he’d end America’s longest running war. This shakeup could allow him to do that in his final months, even if it pisses off the Democrats. Now he’s already announced plans to withdraw 2,500 troops from Afghanistan and Iraq since Espers ousting. And rather than seeing this as a shift away from forever Wars, as you said, congressional Democrats and military industrial complex insiders say the draw down could make the Biden administration look bad if it turns around and re-deploys troops to Afghanistan in the future, which it is indicating that is something that it would do. But Trump is no Saint here. You know, he’s partnered with Saudi Arabia and given them tons of weapons to bomb and starve civilians in Yemen. So this is absolutely political, but we might see us get out of that Afghanistan war, even if just temporarily.

Mike Papantonio:             We need to be out of Afghanistan. If we were to say, okay, let’s, let’s at least say this guy did something, right, it’s the draw down of troops. If Biden, again, Biden is surrounding himself with Warhawks, they’re hugely from the weapons industry. He’s going to turn, he’s going to start turning that heat up. We’re going to see re-deployment of troops. But you’re right, when he does that, it is a wake up call to the American public is, is this the democratic party getting us involved in more Wars? So he has a purpose and that is obviously one of his purposes. Brigida, thank you for joining me. Okay.