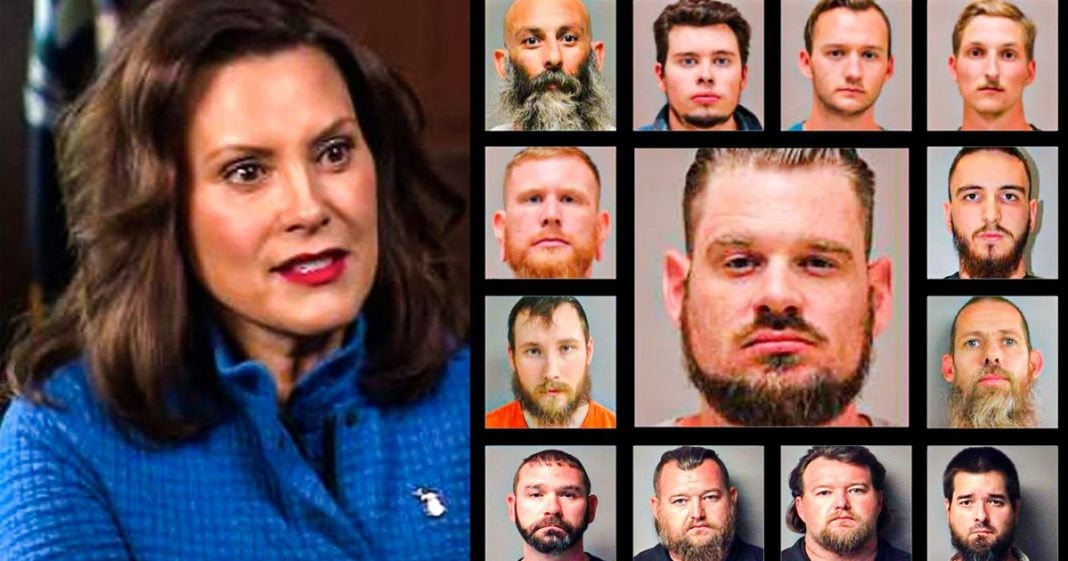 According to documents filed in court this week, the plot to kidnap Democratic Michigan governor Gretchen Whitmer was far more disturbing than previously reported, and the men who were plotting were hoping to get other government officials, too, and then they were going to stage a televised execution. These are the people that Trump and the Republicans are embracing, as Ring of Fire’s Farron Cousins explains.

The plot to kidnap and publicly execute Michigan’s democratic governor Gretchen Whitmer has not received the media attention that it deserves. And this week as six individuals charged are headed to federal court and eight are headed to state court. We’re finding out a lot more details about how gruesome this plot truly was, how extensive these plans were, just how incompetent our media is here in the United States, because we’re not hearing about this story. This happens to be from the independent over in the UK, because they’re not afraid to talk about it. They’re not afraid to explain how crazy people in the United States have become thanks to Donald Trump. So here’s what we learned this week. According to new court filings a new filing show. Another plan the militiamen had, uh, had drawn up involved a takeover of the Michigan Capitol by 200 combatants, the Capitol building by 200 combatants.

These members would then allegedly stage a week long series of televised executions of public officials. According to the government’s documents, elements of another plan involved burning down the state house while the legislature was in session and locking every door, therefore leaving no survivors. That is what these 14 individuals who thought they could grow their numbers to 200 individuals. One need to do why, because they didn’t want to wear a mask. Let’s never forget that. That is where this came from. These pansy snowflake idiotic, right wing militia Republicans were so terrified of the thought of having to wear a face covering during a deadly pandemic that they were willing to just murder the entire government of Michigan.

These people are insane. I’m not saying that, you know, hyperbolically, uh, I, I mean, genuinely, these individuals are insane. They need to be locked away forever and not in prison, but in mental health facilities, they need help. They don’t need, you know, hard labor or, or, or, you know, rehabilitation. They need psychiatric help. If your response to somebody saying, Hey, can you cover your face and not let germs out? Cause we’re in the middle of a deadly global pandemic. If your response to that is I’m going to go kill 200 people. Now then guess what? You’re crazy. There, there, there’s no other way to say that folks, we have to call a spade, a spade. And that is what this is. These individuals. You do feel a bit of sympathy for them because you do understand they are mentally ill. And we here in the United States do a horrible job of taking care of, of mentally ill individuals. We just send them off to prison. Prison will do nothing for these people. They need help. And that’s another tragedy here is they’ll never get it. They’ll never get that help.

And they’ll go And they’ll serve their time and yada, yada, yada, and then eventually they’ll be released again. And who knows what will happen at that point? Maybe they will have had some counseling sessions while in prison. Maybe that’s enough to work out some of their demons, but it certainly isn’t going to be enough to treat all of them. And so what they’ll do is they’ll probably medicate them. You know, you get some pills Don’t Ever forget to take your pills because then you could end up doing bad things. And the cycle continues. We have to help people like this. Believe it or not as crazy as it sounds, Because if we don’t, it’s only going to get worse.