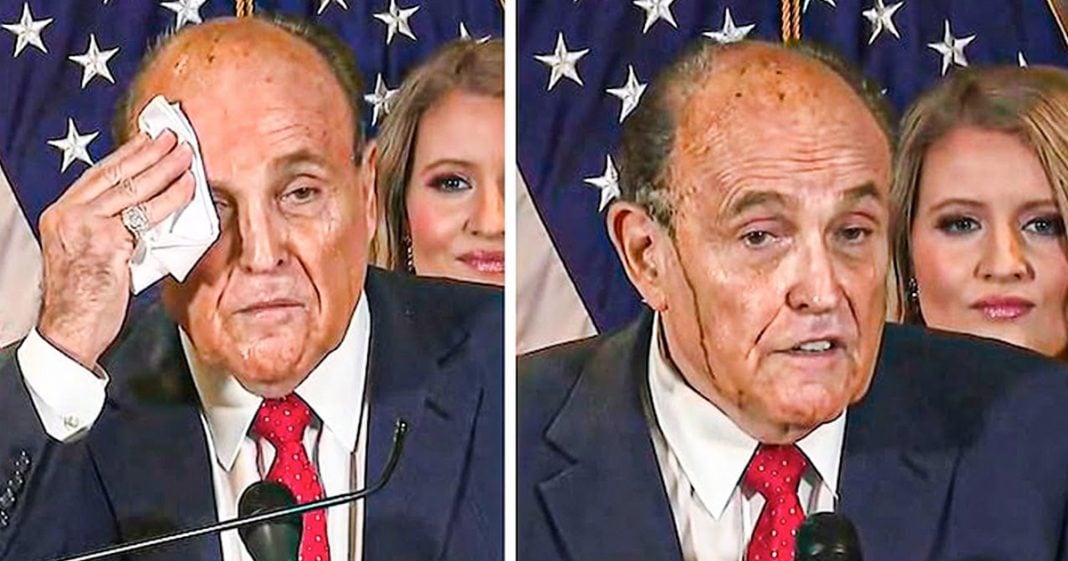 Rudy Giuliani and a team of Trump’s lawyers held a press conference on Thursday, and it will likely be remembered as one of the most bizarre moments from this administration. Giuliani’s spray-on hair began melting, he accused literal ghosts of helping Joe Biden win, and then closed it by blaming George Soros and the Clinton Foundation. Ring of Fire’s Farron Cousins discusses this truly bizarre occurrence.

Yesterday, Rudy Giuliani led a Donald Trump’s rag tag team of election lawyers to a podium. And then proceeded to just tell us some of the most insane things we have ever heard while also at the same time melting. You see Rudy Giuliani apparently decided that before he was going to go get on TV and explain why Donald Trump actually won the election. Uh, I guess he decided he was going to go ahead and spray on some new hair. And well, this happened.

Yeah. Um, that stuff needs a little time to set. So probably not a good idea to go ahead and just spray on your hair or spray on your color and then go out there and then sweat your butt off. And then your face is just dripping. Uh, the, the jokes online were hilarious. Uh, Parker Malloy with media matters actually mentioned that, Hey look, Rudy Giuliani is actually sweating gravy. Uh, so anyway, the funny thing is like that wasn’t even the weirdest thing that happened in that press conference. I don’t even know that that breaks the top five of the crazy crap that took place during that press conference, because after they kind of push Rudy’s melting self to the side, uh, one of Trump’s lawyers by the name of Sidney Powell gets up there and she starts talking about the fact that this election was stolen. This is the craziest part. This election was stolen by Hugo Chavez. Who’s been dead for seven years. So obviously the ghost of Hugo Chavez, communist money from, from Venezuela and other places, George Soros, the Clinton foundation. And of course, computerized vote switching somewhere behind the scenes.

She literally blamed each and every one of those things on Donald Trump’s election loss for Donald Trump’s election laws, every one of those things working together, the ghost of Hugo Chavez and George Soros and the Clinton foundation. It’s like the best of Republican’s Madlibs folks like, Hey, we need a conspiracy, George Soros, George Soros. I’ll write that down. Hey, we need a, uh, an organization, the Clinton foundation, it’s the shame things. They always blame for every single thing. Except somebody got creative and said, what if we brought in a ghost? What if we had the ghost of Hugo Chavez out there somehow, maybe that maybe it’s the ghost that got into the computer machines and started switching the votes. I don’t know. I don’t know how it works. You’re going to have to talk to somebody who’s into necromancy. Cause I don’t quite understand that, but the ghost and the communist money. Cause that’s what communists are known for. Right? Having just tons of money to throw the whole thing falls apart on its face. Of course, little Jenna Ellis. Jen Ellis gets up there after Rudy’s off to the side, melting Sidney, Powells, ranting, and raving like a crazy lunatic. And then Jen, Alice gets up there and somebody says, Hey Jenna, you keep telling us, you have all this, this evidence. Can you show us? And she, she goes, how dare you?

She flips out because people in the audience got tired of the conspiracy theories, tired of watching. Rudy looked like an ice cream cone in the summer and said, Hey, um, could you just show us evidence? And she got off. And the reason for that is because we all know there is no evidence. There’s nothing. These people have nothing except for conspiracy theories that are getting crazier by the day, remember a couple of days ago, the crazy conspiracy theory that was pushed by Trump’s lawyers. The secularists, uh, was that Joe Biden had hired mob boss by the name of skinny Joey Merlino to flip Pennsylvania. But now it’s like, okay, well, skinny Joey has an airtight alibi he’s down in South Florida. So what does it now? Aha. Nobody has an alibi for the ghost of Hugo Chavez. Nailed ’em look, this is an attempted coup let’s be honest, but it’s a very comical one. So I kind of feel like, I don’t know that I should take this seriously because these people are so incompetent. Oh. And speaking of incompetence, let’s not forget Donald Trump’s Twitch team because the Trump campaign, Twitch Twitch team decided to live stream the press conference, except those idiots forgot to turn off their mikes. So you can hear them making fun of Rudy. Giuliani’s melting hair on their Twitch stream. This is the people we’re dealing within the CU. I think we’re going to be okay.