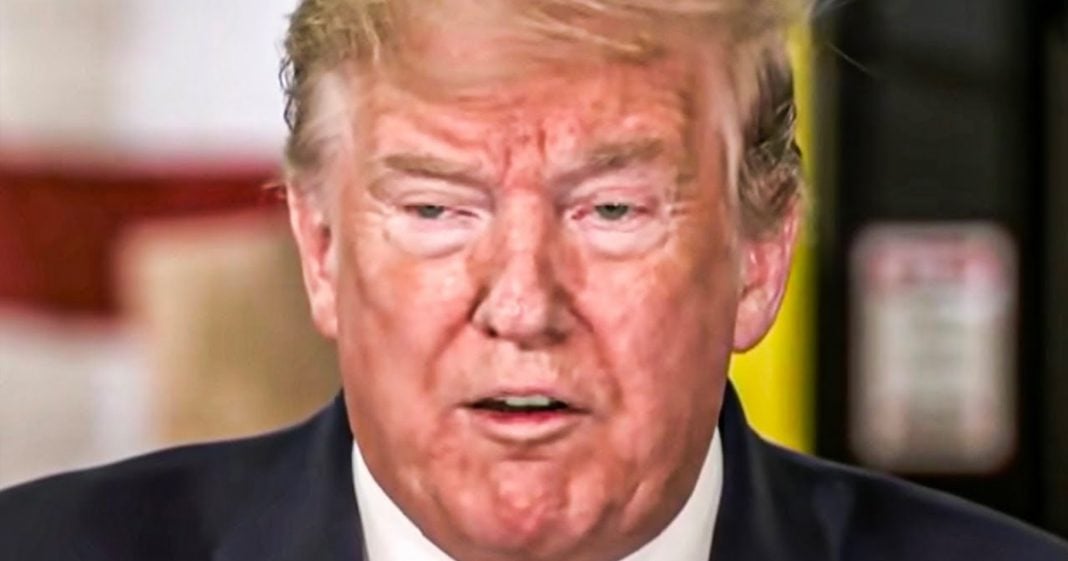 Eventually, the truth always comes out, and we’re starting to learn more and more about why Donald Trump is refusing to allow Biden’s transition team to participate in COVID meetings. According to reports, Donald Trump is furious over his own delusion that Joe Biden might be the one to get credit for a COVID vaccine, much like Trump took credit for the economy he did nothing to improve. Ring of Fire’s Farron Cousins explains what’s happening.

According to reports. And according to Donald Trump’s own tweets, one of the things that he is most off about right now is his fear that Joe Biden is somehow going to be able to take credit for the COVID vaccines that are currently in development. Uh, and of course in the last week we’ve gotten news that Pfizer’s vaccine was 90% effective. Uh, Madonna said their vaccine is 94.8% effective. And then Pfizer came out and said, Oh, well, ours is now 95% effective. So there’s that a match taking place between the two drug companies over who’s got the more effective vaccine. But the bottom line is that both these vaccines are being developed. Now Fowchee says they’re going to be available for the highest risk parts of the U S population in December. So distribution’s going to begin. And Trump is still afraid that somehow Joe Biden is going to be the one to claim credit for it.

Uh, here’s what Trump tweeted. Another vaccine just announced this time by Moderna 95% effective for those great historians. Please remember that these great discoveries, which will end the chain of plague all took place on my watch. Historians was in quotation marks. So I don’t, I don’t know why. Um, do you know why Donald Trump is afraid that somebody else is going to take credit for something that happened under his watch that he doesn’t even actually deserve credit for? Because that’s what he’s is. He’s been doing it since day one. I don’t know if you know about this, but the economy was on the up and up at least on paper, uh, when Donald Trump took office and we continued on that upward trajectory for most of the time, until a few months, really before the, uh, uh, pandemic hit, uh that’s right. See the economy didn’t just tank because of the pandemic.

Long before that happened, we were having economists tell us we’re headed for a recession in 18 months. We talked about it constantly. You can go back through and actually see all the videos. A lot of them from the summer of 2019, where economists kept saying this guys we’re headed for a recession. We’re headed for a recession. Things are gonna come crashing down. They didn’t know the pandemic was going to come. Uh, bring things crashing down before the other economic indicators could, but it still happened. But up to that point, Donald Trump had said, this is my economy. It’s the best ever. I’m doing great. I’m doing wonderful. Look at me, look at me. I did all this. He didn’t do any of it. None of that was because of him. And so he is afraid that Biden is going to turn around and do the same thing with the COVID vaccine that Trump did with the economy.

The truth is that neither man deserves credit for this vaccine. Certainly not Biden. He wasn’t even in power, but neither does Trump. What did he do? You forked over billions and billions and billions of dollars to these companies. Then they use taxpayer research to come up with the vaccine. Anyway, all you did was pad their pockets, and now at least Moderna is planning on charging us. Uh, for the vaccine. Pfizer has said it will be free for all Americans. I, I doubt that they’ll work out a deal with the government. The government will pay them billions, and though hugely profit off it and Moderna has thrown away all pretense. And they said, Oh no, we’re going to have a big, big, big, uh, 20, 21 because of the vaccine. So do you want credit for that? Do you want credit for Americans being price gouged after we’ve literally paid twice for the drug already. Now we paid for the R and D. Then you took our tax dollars in addition to paying for that. And then you just gave them billions in our tax dollars and said, here’s more money. No, dude, you own that. That’s on you. So when the rest of us have to go and pay for the vaccine for a third time, Oh, don’t worry. We’re not going to blame Biden for that. That’s on you.