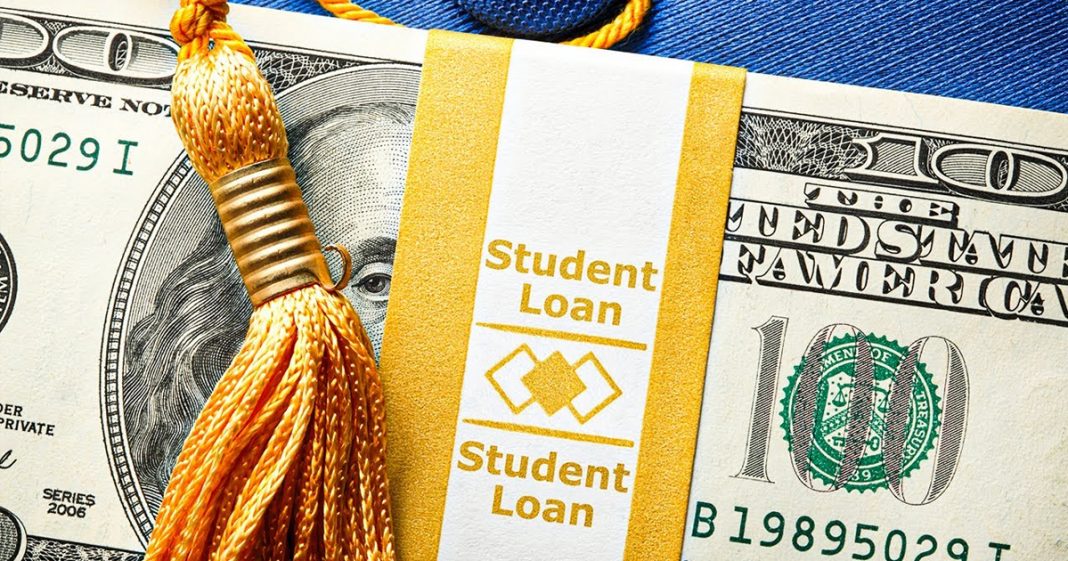 It is certainly easy to blame student loan borrowers for the crisis. After all, they took out the loans so it is their fault, right? That’s not exactly how this works, and the overall economic climate in the United States is the real culprit here, and that is the reason why these debts need to be cancelled in order for us to finally move forward as a country. Ring of Fire’s Farron Cousins explains this.

Thursday number three, three, two, one. I’ve been doing a lot of research recently on the student loan debt crisis here in the United States. And the reason that I’m having to go through and pull out more numbers and do kind of more, you know, extrapolation of data is because after a segment I did the other day about the need to abolish all student loan debt. I got some, some emails from angry people on Twitter saying, Whoa, Whoa, Whoa, Whoa, there, buddy, boy, you had borrowers take out tens of thousands of dollars in loans. Hello. They knew what they were doing. They know what debt is. They knew they’d have to pay it back. And if you forgive it all, ah, you’re going to screw everything up. They owe the money, they got something in return for it. The college has got the muddle a little little bit.

See, that’s a dumb argument. It is an argument that people who don’t want to actually think about the problem make, because here’s the thing. This is what I found in my research. And that’s what, you know, what I love is the thing. That is the fact that this is not exclusive material that only I have access to. Okay. I’m not the only one who has time to go through and find it either. This is information that’s readily available to any American citizen and including plenty of people overseas who want to seek it out. That’s the problem though, folks on, on the big issues where you need to learn stuff, you have to want to seek it out. Okay? Don’t just sit there and wait for somebody else. Whether it’s me or any of these other hosts to spoonfeed it to you. You know, we’re here as stepping stones to get you to start thinking about things.

You got to take those other steps. I do my best to provide the facts and figures and statistics when I can, you know, everything I do is based in fact, but come on, y’all got to do some of the work too. It’s rewarding by the way. But anyway, here is what we have. According to the numbers. Since the year 1970 last 40 years, the cost of college tuition has increased by 3004%. A 3000% increase in the cost of college tuition. During that same 40 year period wages have stagnated here in the United States. When adjusted for inflation Productivity has gone up by 300%. Wages Have not gone up. Our buying power today is equal to what it was in 1970. Even though prices on everything else has gone up or our buying power, excuse me, is what it was in 1970. So that means as the prices of other things go up, we’re not able to afford certain things anymore.

Wages Have not kept up with inflation. And I say all that to remind you that if you took out student loans in 1970, you’re talking about a time where you would go to college. You’d take out a couple thousand in student loans to pay for your four year degree. You’d come out college, you’d get a decent job because you had a better job market. You’d get paid a decent wage and you’d pay off your loans. That’s not the case anymore. And that’s not the fault of the borrower. So stop blaming the borrowers. That’s the fault of capitalism. It’s not the borrower’s fault that they haven’t drilled into their head from the time they’re born. That if they want to be successful in life, they have to go to college, look at yourself and see how many times you have said that to your kids or how many times you have heard other people say that to their children or how many times you have seen that on TV or in any kind of story.

I know we hear occasionally will so-and-so, didn’t go to college and they’re a billionaire. We know those stories because it’s so rare. Your kid is not going to be the next Steve jobs. Most likely, I’m sorry. They’re probably not. Yeah. They’re not going to be bill Gates. Not everybody can be, but we tell our kids constantly you have to go to college. Okay, well, they can’t afford it. So they have to take out student loans. Ah, but what about scholarships and Pell grants? You ask? Well, dig a little deeper into that and you’ll find out that the amount of those being granted every year is steadily declining every single year. So the opportunity to go to college for free on your own merit is declining. Unless of course you can throw a ball really, really well. Well then yeah, you get it for the average person in the United States today to be able to go to college and afford it and not have to take out student loans, assuming they didn’t get Pell grants or scholarships, they would have to make $22,000 above the average median income of the United States, $22,000, more than the average income, just to afford college at 18 years old, by the way, how many 18 year olds, you know, can do that.

I’m going to go ahead and get zero, right? So stop blaming the borrowers. Instead. How about you blame this capitalistic system? We have, that’s clearly broken that forces kids to go and do this and take out these loans when they’re 18 years old and don’t understand what any of these terms mean. The interest rates continue to go up every single year. See I’m lucky enough. You know what the interest rate is on my federal loans, one and a half percent. I have friends who went to the college at the same time. Uh, the college went to college at the same time. I didn’t go for English, obviously took out private student loans. Their interest rates. Last time I checked in with them are currently sitting at nine, 9% and they started off at 0%. They took them out when they were 18 and they didn’t necessarily understand because nobody bothered to explain to them what a, you know, how that was going to increase over time. The system system is broken and the only way to fix a broken system like this one that’s this far gone is to throw the whole thing away and start over. Hopefully start over with tuition free college. That’s the ultimate goal here in the United States, what we need to do, but we can’t get there without first addressing the student loan debt crisis. And we can’t address that crisis until we admit to ourselves. And we’re honest about the fact that it’s not the fault of the borrowers. It’s the broken system that we have forced them into.