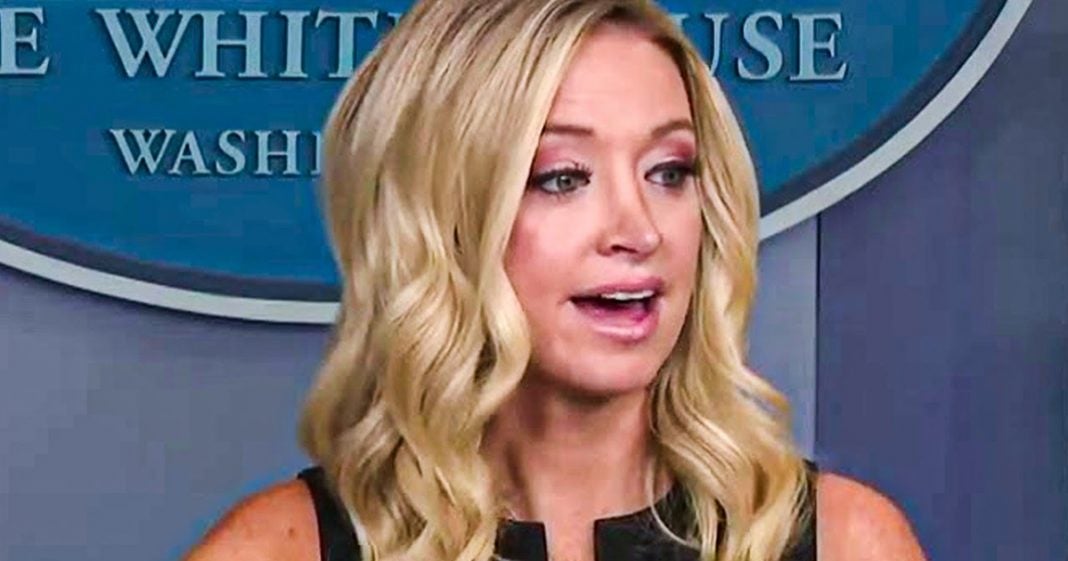 During an interview with Sean Hannity this week, White House press secretary Kayleigh McEnany said that the hue binders of clearly blank paper she has held up as evidence of voter fraud are totally not blank, and that CNN is wrong for trying to say that they are blank. No one knows exactly what is in any of these binders that McEnany keeps producing, but everyone seems to agree that they are completely worthless. Ring of Fire’s Farron Cousins explains what’s happening.

Number five, three, two, one Last week, Kayleigh McEnany Donald Trump’s press secretary slash somehow a campaign employee as well, went on a TV as usual. She had one of her little binders and said, Oh, this is all the cases of voter fraud that we have. Ah, look at my binder. And then CNN did a segment where they said, yeah, you’re lying. That’s not real. That’s either blank paper, or it’s just random papers. You’ve picked up or printed out. There’s no evidence of voter fraud in there. And this again was late last week. McEnany apparently spent the next few days just being furious about this accusation. Then on Tuesday evening, she appeared on Sean Hannity’s program to whine about the fact that no, these are their real papers. There’s a real voter fraud. I promise it’s not blank pages. Um, now you’ll remember, McEnany got busted back in October, which he said, we have a health care plan.

You want to see my health care plan? It’s right here. This, this is all my healthcare, all of it. That’s all. That’s all healthcare plan. Uh, so there you go approved you’re wrong. And it was like, yeah, those, those pages are blank. Kayleigh, you can’t, you, you can’t just put blank pages in a binder and say, that’s your plan. Uh, so why should we believe you now? Like now you’re totally not lying. You are though, because here’s the thing, folks. This is how we know she’s lying. Not just based on her past history of lying that alone tells us she is, but there’s the other simple fact that the cases, uh, her bosses, her boss has been filing, excuse me in court are getting thrown out because why? Because there’s no evidence now. I don’t know if it’s either because no evidence exists. I’m pretty sure that’s what it is.

Or maybe it’s because Kayleigh’s the one with all the evidence, Kayleigh, my God, you have to get that binder to the court room. Rudy’s in there making an of himself and you’ve got all the evidence. That’s what the case is. I’ve been waiting for. That’s why they’ve been getting thrown out. That’s why you lost two, maybe three different law firms in the last few days, because you had no evidence. And apparently Kayleigh’s just been walking around, showing it to CNN and Fox news and everybody else and Oh Lord, you needed it in court. Oops.That’s how ridiculous their arguments have become.

You would have to be a special kind of stupid to actually believe that Kaylee McEnany is walking around with proof of voter fraud, but she’s not giving it to the courts. Like you would have to be go out in your yard and eat rocks every day, stupid in order to believe this. And yet here we are and she’s selling it to Fox news and Sean Hannity just sits there all the time, like, yup. Yup. Yup. Totally. That binder is not totally blank. It is folks. If there was evidence, they would be showing it to each and every one of us, if they had a healthcare plan, like she had claimed in the past, they’d show it to each and every one of us, they have nothing. They have no ideas. They have no legal plans. They have absolutely nothing. And that’s why they get pounded every single time. If you have evidence of voter fraud, Kayleigh, go show it in one of those li lawsuits that your campaign is filed, claiming there’s voter fraud. But if you don’t shut up and put the binder away, because nobody cares about your little props, people care about the truth. And if you have the truth, let us see it. And if not, well, I think any one of us could tell you where you could stick that binder.