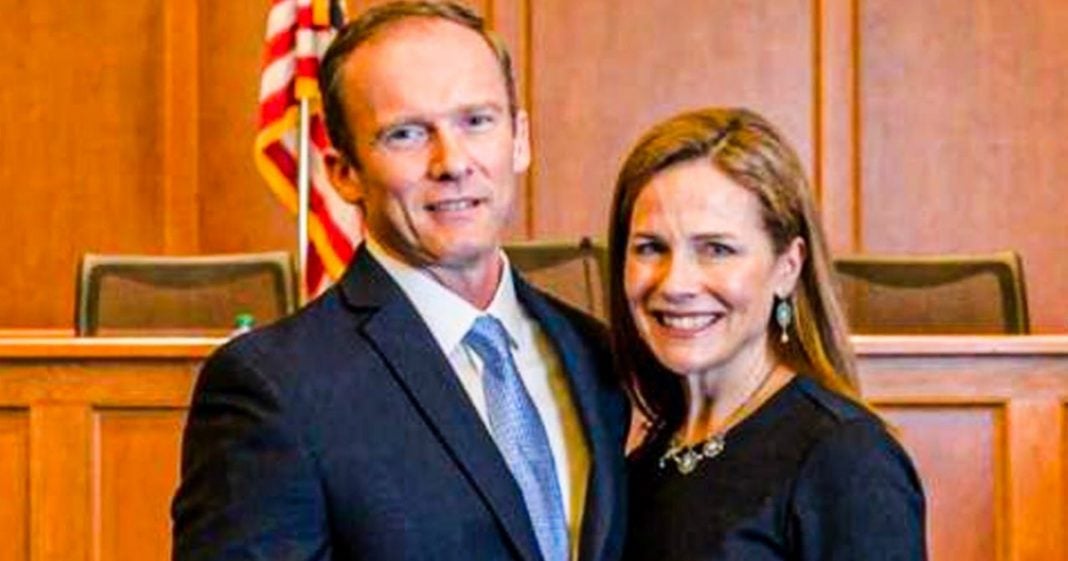 Supreme Court Justice Amy Coney Barrett’s husband Jesse announced that he will not be leaving his position at a private law firm, even though his firm will likely end up handling cases for companies that could appear in front of his wife on the Supreme Court. It is commonplace for the spouses of justices to leave their firms when the spouse takes a position on the court, but norms have now been thrown out the window. Ring of Fire’s Farron Cousins explains what’s happening.

Supreme court justice, Amy Coney Barrett, the newest Supreme court justice. Uh, her husband, Jesse made an announcement this week that he was absolutely going to make sure that he creates conflicts of interest for his wife and pushes the boundaries on ethics rules. And he did that by announcing that he was going to stay with his law firm of South bank legal, and he’s going to stay with their, you know, uh, litigation practice group. Here’s the thing about that folks, basically what he’s saying is I’m going to stay with this private law firm that represents a lot of corporations, even though my wife is now sitting on the U S Supreme court. And even though other spouses of Supreme court justices who also worked at private law firms, uh, quit their jobs pretty much had to because that’s the norm. You do that. So you do not create problems for your spouse.

That is what all of them have done before up and till now, Jesse Coney Barrett has said, now I’m not going to do it. I know what’s going to create problems. I know it’s ethically dubious, but Hey, so is my wife’s nomination, right? That’s what we’re dealing with right now in the United States. That’s what what’s happening. That’s how horrible this pic was. Again, this South bank legal that he works for. You go to the website, you look it up. Yeah, they do corporate law. They represent the same kind of corporations who will eventually find themselves sitting in front of the Supreme court, talking to adjust to Amy Coney Barrett. Her husband may have defended them somewhere along the line. Hell, he may be the one that has to go to the Supreme court. Then what? Oops, no thing we could’ve done to avoid this, except for literally, what’s been done every time in the past.

You want to avoid a conflict of interest, but still practice law. That’s not difficult. You want to go represent slip and fall victims, do it. Auto accident victims, do it. You know, small businesses. You want to go into real estate law. There are so many different branches of law that are still going to pay you real good money. So don’t worry about that. But you could go to any one of those. You just don’t want to because you don’t care because corporate defense lawyers make a, the house almost caught me on a profanity. There, they make a ton of money. Let’s put it that way. They make a ton of money and I’m sure that’s what Jesse Coney Barrett, his name is dot Coney Barrett, but I like calling them that, um, that’s what Jessie wants to make. That’s what he wants to do. And it’s going to create huge ethical problems. And the question that’s going to remain to be answered is, is Amy Coney Barrett going to step aside from these cases that she should step aside from where her husband creates the conflicts for her? Will she step aside? There have been instances the past when she was on the lower court Where she didn’t. So whyWould it be any different now, maybe, maybe it will be more eyes are, you know, focused on the Supreme court than on the lower courts. So maybe it will be different or maybe it’ll be exactly the same. And Jesse will have set a dangerous precedent for all of the other Supreme court spouses in the future. This is one of those instances where only time is going to tell.