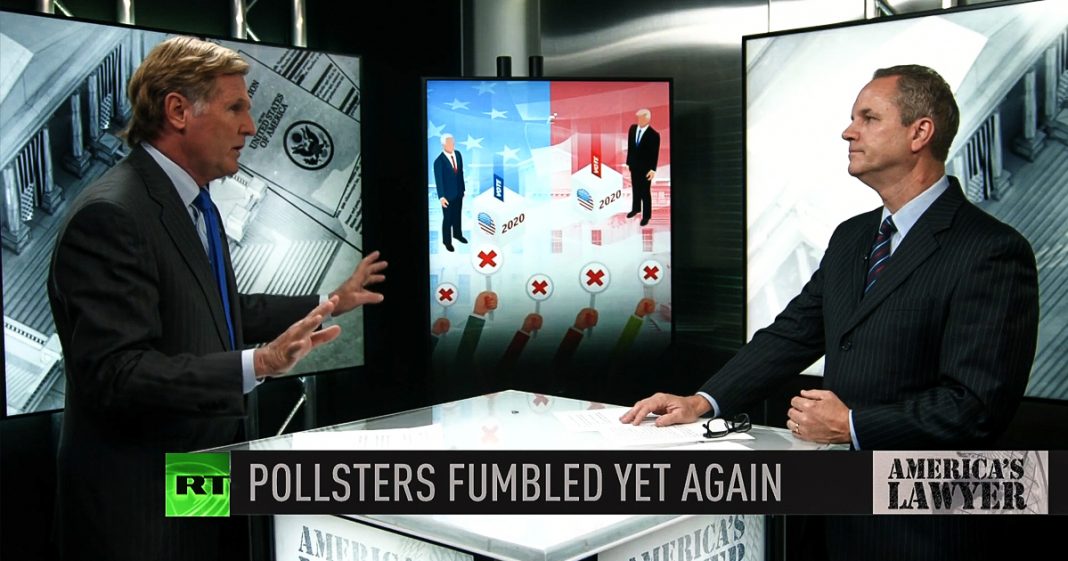 Via America’s Lawyer: Media analyst David Lamb joins Mike Papantonio to explain how pre-election polls abysmally underestimated voter turnout for Trump, as many of Biden’s double-digit leads shrank to the slimmest of margins on Election Day.

Mike Papantonio:             This year’s contentious election left pollsters dumbfounded, once again, as many States saw Biden’s projected double digit leads shrink to the slimmest of margins. I’ve got media analyst, David Lamb, with me to talk about this, David, you know, I got to tell you, you called this right.

Mike Papantonio:             You, you, you, you really did. The last show you started saying these numbers are, the numbers are, they’re getting thin. They’re tightening up and then you gave the reasons why. So I want to ask you, how did the pollsters get it wrong again? There’s no question, they blew it again. I, I’m not going to go to dress it up. You got.

Mike Papantonio:             It’s like you got a bunch of goofballs running this whole polling business.

David Lamb:                         It was going to be a landslide. A number of ways, one pollster, I think he got it right. Whenever there is a, whenever the Trump name is on a ballot, all bets are off. As to why the shy Trump voters, what they said, I think it really comes down to Trump voters do not trust the media. And I don’t think they participated in the polling.

Mike Papantonio:             And as a matter of fact, that’s probably one reason that we’re going to see Trump and his types move into more conservative media, because that’s where people are going to go now. So that, that there’s no question, the lack of trust in the media, not just the polling business, shut it down. What, what do the numbers tell us about how Biden won?

David Lamb:                         There was a massive turnout as you well know, Joe Biden has gotten more votes than any presidential candidate in history and Donald Trump, second of all time. So a massive turnout, conventional wisdom always is that benefits the Democrats. It did so once again. Biden and Trump just set numbers. The turn out in some urban areas, Pap, was just off the charts and, and Biden had to do that. We talked a lot about, you know, there’s the, there was this anti-Trump vote, but would, would, was anyone jazzed for Biden, who knows what happened, but they did turn out for one reason or the other.

Mike Papantonio:             Okay. There was a lot of talk about the suburbs being the key to this election. We heard that all along. There were, there were a few, there were a lot of myths out there, weren’t there?

Mike Papantonio:             So, so as, if we look at the big, the big turning event, again, I, I even think the pollsters, when they did their recap of why they screwed up so bad, I think they even got that wrong. And, but I’m looking at the youth vote, give me your take on the youth vote.

David Lamb:                         Yeah. The, you know, well, you’ve got a daughter in that age group and, and historically, you know, that, that those, that millennial under 35 have not really turned out well. That was a major question mark going into this because, they did favor, they did not like Trump, favored Biden. But would they turn out? That was the big question mark. And they certainly did in key States, if you think of Wisconsin, one of the huge wins and Biden won that by less than 1%, but the bump in the Madison, Wisconsin area, it, Biden was able to do something that Hillary Clinton was not.

Mike Papantonio:             But as you look at this, as you look at this overall, and you say, okay, that the criticism that in 2016, we heard the pollsters say, we’re going to change some things. We know what we did wrong. We didn’t put enough emphasis on white middle-class voters. Remember that?

David Lamb:                         Yeah. And, and you’ve got to wonder if, if it’s in a sense it’s over for many of those pollsters and, and the, the, the way the media covers that, that, that has been such a benchmark, such a spectacle and a part of it. And now I think there, there’s just, there’s the integrity and the confidence in pollsters.