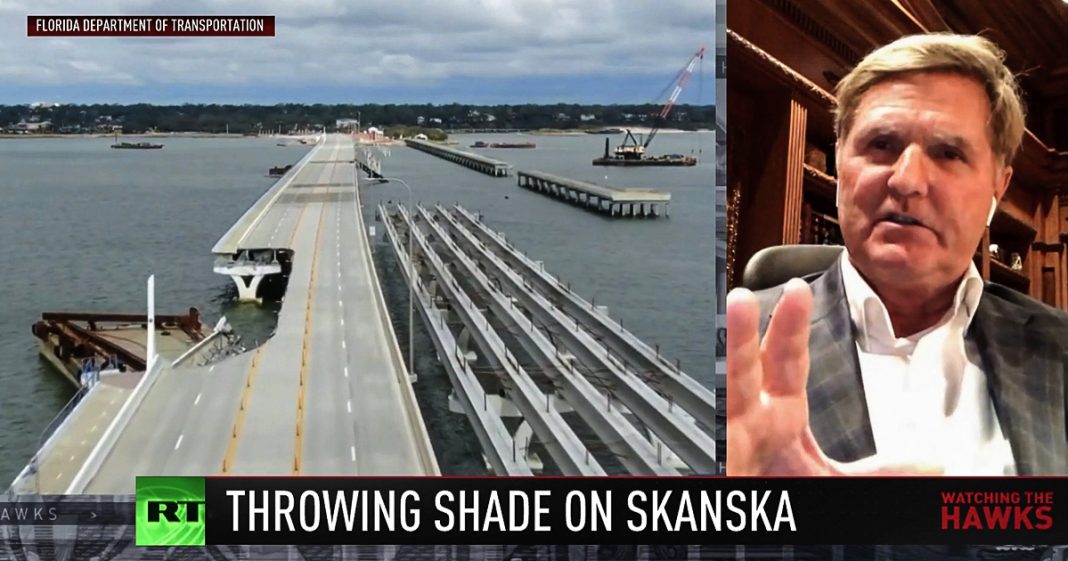 Via Watching The Hawks: Skanska, a construction industry giant that is making waves for all the wrong reasons, after construction barges, carrying cranes, beams, and other equipment broke free during hurricane Sally causing damage and leaving the Pensacola Bay bridge out of service for months. Mike Papantonio joins Watching The Hawks to explain why locals are holding Skanska accountable.

Ameshia Cross:                  Infrastructure and construction projects keep America going. But the companies that make it possible rarely make headlines, but that all recently changed with Skanska, a construction industry giant that is making waves for all the wrong reasons. 23 Skanska construction barges, carrying cranes, beams, and other equipment broke free during hurricane Sally. This caused major devastation across Escambia and Santa Rosa counties. And while thankfully no injuries were reported, the barges caused damage leaving the Pensacola Bay bridge out of service for six months. Locals are holding Skanska accountable because they are upset that the company hasn’t been open about their role in the disaster, nor had they done much to remedy the effected parties. This is notable because Skanska makes big money in the US, $2.7 billion in commercial and multifamily projects. The company built structures like the world trade center, MetLife stadium, where the New York giants and jets play, as well as several airports, hospitals, and other structures. But Skanska also has a long history of problematic mistakes and some are deadly. The company has been charged with fraudulent labor practices, bribery, bribery scandals, and black contractors filed racially motivated harassment claims against them. In Florida, local businesses want Skanska to pay up. Revenue losses resulted from the bridge outing and claims of Skanska not following hurricane protocol have erupted. Here for more on this developing story is Mike Papantonio, host of America’s Lawyer. Welcome Mike.

Mike Papantonio:             Well, thank you. Appreciate it. Yeah. I think you, you know, as I listened to you all open the program, I thought it was interesting, the story about the Pentagon was so interesting because it it’s, it’s kind of a macro of what we’re talking about here in a more of a micro story. And that is accountability. Who’s, who is watching the people who are making decisions about things like the Pentagon and, and with America’s Lawyer, we’ve been trying to analyze, what’s, what’s happening with the new infrastructure build out. Okay. We, we have, we have a lot of infrastructure build-out taking place all over the country in various places, but what we’re not doing is we’re not really looking. We, we, it’s almost like we’ve abandoned our responsibility to say, let me show up at the hearing that we’re going to have with a company like Skanska, where they says, where they say, we’re the people that are going to improve your infrastructure.

We’re going to build a $400 million bridge and you can count on us. And what we, what we’ve, we’ve analyzed this ad nauseum we’ve, we’ve taken a look at, you know, mass protests taking place in the streets, individuals going state to state on big national issues. But we’ve forgotten about what’s happening in our backyard. This, this, this act of forgetting what’s happening in our backyard probably will cost this, this community, billions of economic loss. And as you pointed out, this was a company it’s a foreign company that shows up in Pensacola. They make a presentation to city council that are half asleep on what’s going on and state, you know, state legislators who were completely out of the ball game. Politicians who care about how much money they can give me. The media barely paying attention to it. And we don’t show up, the people who live here don’t show up at that meeting and had they done that they would have found out that this is a company that has paid $20 million fines, accused of bribery in Argentina, crippled to the fact that they almost can’t do business in South America because of their criminal conduct. Cited for using subs, substandard quality equipment and subs, sub standard materials.

But here’s my point. The point is we have to worry about those bigger stories. We have, there are things we have to show up in the streets about, but we have to get back to the days when we’re showing up at those hearings. And we’re talking about a company that has a, it has $170 billion global revenue who has now left us in a position in this community. And I can take this story and I can superimpose it all over the country, whether it’s building roads, whether it’s building bridges, building infrastructure, where the people living in that community have abdicated their responsibility to show up and ask questions. It’s so bad that what we’ve done with our, with our firm is we’re committing ourselves to following Skanska, wherever they go in the country, wherever they make a presentation, we’re going to be there with the Skanska story, the outrageous quality of negligence that took place. Their, their absolute denial of any responsibility. So we’re going to show up with those stories, but I think we have to go back to the days where maybe, you know, it was a generation that always showed up for these hearings. You know, if there was, if there was a public hearing about building a new park, if there’s a public hearing about building a new road, people were there and it’s almost like there’s a generational disconnect where we’re not showing up.

Tyrel Ventura:                     Mike, I want to ask you, how often do you see these big, super conglomerate multinational companies like Skanska building our infrastructure in our backyard here in this country? Because to me that seems like a job that the government should be doing itself and providing those jobs, not outsourcing it to some company from what Sweden or Scandinavia.

Mike Papantonio:             There was a time, there is, no, you hit it on the head. There was a time when we had government that did this. We didn’t go to Sweden or Germany or China, or, you know, Japan to, to build our infrastructure for us. Do you remember, I mean, well you can still see it in your, in your, in your head, can’t you? The building of the skyscrapers that took place at the turn of the 19th century, you know, the, the, the you have those visuals when it was an American, it was American undertaken. And then we got into this idea where we can send our business to companies like Skanska, rather than holding a local company responsible for what we’re doing. We’ve, we, we’ve become so globalized that it’s become a point that we have forgotten our responsibility to show up at hearings and stop this thing that no matter, no matter whether I win this case or not, there will be no way to correct the, the, the damage that’s been done to hundreds of businesses. Second and third generation businesses. You remember, I handled the BP case.

Mike Papantonio:             It was the same kind of problem, but there, there that was a different analysis. Here, we’ve invited them into our house. They’ve taken advantage of us. And now they’re going to go back to Sweden and do it to somebody else, unless we change the way we think about how we do business in the US and this infrastructure, this infrastructure today.

Ameshia Cross:                  This is just a really sad situation, Mike, and I, full disclosure, I lived in Pensacola and Pace both Escambia and Santa Rosa County respectively. So I know the importance of that, that, of that bridge to those businesses. But this isn’t the first time the construction company had a foray into bad press or lawsuits. How were the other allegations handled? You know, we had five deaths in an Orlando highway project, fraudulent labor practice, racially motivated harassment. There’s so much the list goes on and on. How, they got above those things somehow. And how do you think this is going to play out?

Mike Papantonio:             Have y’all been re, have y’all been reading my notes? Let me look at them a minute. The only way it play, the only way it plays out is this. We have to perp walk criminals. Okay. When people do things wrong knowingly, when they engage in bribery, whether it’s in Argentina or anywhere in the country, when they, when we have, when we find that they’re using substandard quality material to build our bridges or our roads, we have to treat them the same way that we would anybody else who’s, who’s guilty of those violations. We have to put them in, in, in a perp walk. We have to say, who made this decision? Who, who, who, who took this step, knowing that it was going to, or foreseeably resulting in the kind of disasters that you bring from that kind of business? So you have, we have to treat them like, we have to treat them like who they are, just because they’re dressed up in Armani suits, doesn’t change anything.

Tyrel Ventura:                     Most certainly, and Mike, we need a lot more folks like you, and thank you for that call to action and for people to get out and pay attention to what’s happening in their local neighborhoods, in their backyards, because that’s how you’re going to change in government front to back. Thank you so much for the good work you’re doing and always welcome on this show. Always a pleasure having you on, sir.