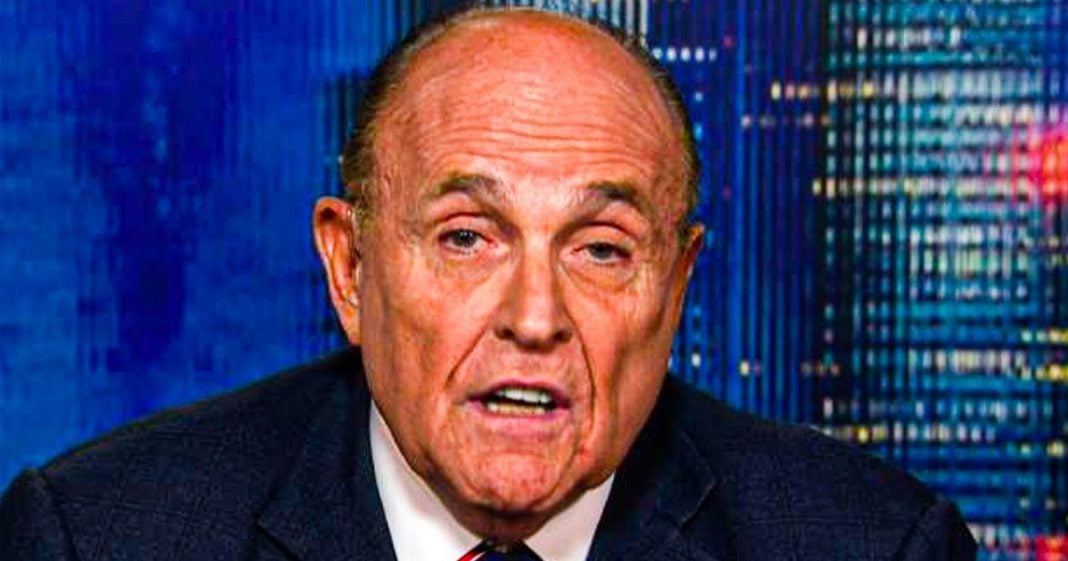 According to reports, Rudy Giuliani has asked Donald Trump to pay him a jaw-dropping $20,000 PER DAY to represent him in his legal battles to overturn the election results. Giuliani hasn’t argued in a courtroom in 27 years, and from what we’ve seen from him in the past 2 years it doesn’t look like he would be worth twenty dollars per day. Ring of Fire’s Farron Cousins discusses this.

The New York times has reported that Rudy Giuliani has allegedly asked Donald Trump and the Trump campaign to pay him $20,000 per day while he is representing them for all of their election challenge lawsuits twice on $10,000 per day for Rudy Giuliani to go into courtrooms and be your advocate, the man who by the way, has not argued a case in court since 1993. So he hasn’t gone into a courtroom as an attorney in 27 years, and he has the audacity to walk up to the King of all Grifters and say, I need $20,000 day to do what you’re asking me to do good for him, right? I mean, again, Trump is the King of all Grifters. And if Rudy Giuliani is confident enough to walk up to Trump and say, Hey, 20 grand a day, then, then by God, the man deserves $20,000 a day. Right?

Uh, Rudy Giuliani, by the way, has disputed the claims reported by the New York times that he is seeking 20,000 a days is I’m not seeking $20,000 a day. Uh, however, it is worth pointing out that most of the prestigious law firms in both Washington DC and New York city, uh, you know, the two basic areas we’re dealing with right now with where these men are from, uh, it would actually cost you roughly $15,000 per day, uh, for this kind of legal representation. So believe it or not, uh, Rudy Giuliani’s request that he swears he never made, uh, just like he swears he was just talking in his shirt. Um, it’s not out of the realm of what Trump would be paying a competent lawyer to do the same thing. Uh, the only problem is that Giuliani is not competent. You know, as we have seen many, many times over the last few years, Rudy Giuliani is only capable of making things worse for Donald Trump.

Uh, there were reports back in the day, we talked about these, uh, ad nauseum at the time, uh, Donald Trump would get furious every time Rudy would go on TV because Rudy would accidentally implicate him in further criminal activity. He’d be like, no, no, no, that can’t be the case. Look at these text messages from these people who are going to prison that I’m talking to ha and then later it’d be like, oops. Yeah, can we not? Can we, can we forget that we’re all dealing with the criminals, uh, cause that really is going to hurt my case. Luckily for Giuliani though, in those instances with both the impeachment and the Mueller investigation, he never had to go to court. You know, he never actually had to go and advocate for Donald Trump that is different. Now these absolutely have to go out there and Giuliani just like Donald Trump himself knows that these cases have no chances of success.

And that even if most of them did succeed, it still wouldn’t be enough to overturn the results of the election and Biden would still win. So why not? Why not? Rudy? Why not go for the big one? This is probably going to be your last payday ever. So go for the 20 grand a day, hell, come back to them and say, you know what? The cost just went up 25 grand a day and a free lunch of my choosing. That’s what you need to do. Uh, uh, Rudy Trump is the King of all Grifters. He has ripped off America for four years and I would love nothing more than for his final days in office to be spent by him getting ripped off by Rudy Giuliani. That would be the icing on the cake here.