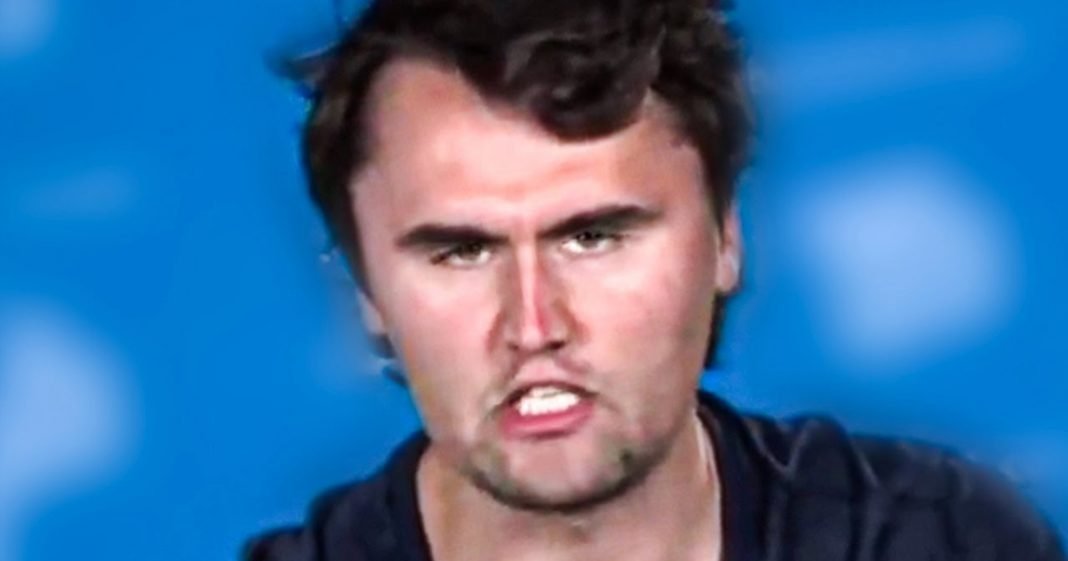 Move over War on Christmas, Republicans are now accusing Democrats of launching a War on Thanksgiving, because they’ve apparently always hated giving thanks. That’s the logic that braindead Republicans are using during a global pandemic to somehow blame Democrats for the fact that they can’t overstuff themselves surrounded by family members that they disagree with on most issues. Ring of Fire’s Farron Cousins talks about this idiotic new talking point Republicans are pushing.

Move over war on Christmas. There is a new holiday war being waged, according to Republicans, by Democrats here in the United States of America. And that is the new war on Thanksgiving. That’s right. Uh, all of these doctors, uh, the governors out there saying you can’t have large gatherings at Thanksgiving, you know, cause we’re in the middle of a global pandemic where the United States is seeing it worse than anybody else because we’re collectively a group of morons. Um, yeah, that somehow is being construed by these great Republican thinkers into a war on Thanksgiving. Charlie Kirk, uh, the King of the right wing Grifters explained it. Thusly here he is.

Charlie Kirk:                          The left has always hated Thanksgiving. Thanksgiving can be interpreted as a religious holiday if you believe in giving thanks to a creator, but they hate Thanksgiving because they believe there is nothing you should be thankful for in America. This is an awful place. It is cancerous, rotten to the core, tear it all down, burn it from within. Why would you be thankful? Instead, we need a revolution. Remember, as the students for a democratic society radicals once wrote in the 1960s, they said conflict is the origin of everything. What happens when you’re thankful by definition, you’re less likely to be involved and engaged in conflict. Thanksgiving is supposed to deescalate any sort of pre-existing issues in our country. And now they’re using the virus as an excuse for you not to be thankful. We’ll be right back.

So before I address any of the idiotic points that Kirk made in the video, I think it’s worth pointing out that he looks like he literally crawled out of a dumpster to come and give that rant. I mean, first and foremost, the camera shot looks like he’s doing some kind of press conference. And then at the end he’s like, we’ll be right back. I thought it was a press conference with the way that that setup looked. Uh, look, I know things aren’t perfect here because we’re, we’re living in the land of make do with the moment, but do brush your hair at least, or get rid of your hair. Trust me, makes it so much easier. But you look like somebody who, if you were ranting, what you’re ranting in the video on the street, uh, people would cross the street to get away with you because they would think there’s something wrong with you.

I’m just, just throwing that out there from one professional to another looks do matter at least to a small degree, uh, cause you don’t want to look as crazy as your talking points are. See that’s, that’s what you got to avoid. Uh, the other point is that literally everything you’ve said is false Thanksgiving can be kind of like a religion. If you’re thankful for God, dude, the mental gymnastics you’re trying to do with that. Trying to say that Thanksgiving literally has anything to do with God Thanksgiving. Isn’t even about giving. Thanks anymore. Here in the United States, that pretense was dropped decades ago. Thanksgiving is about stuffing. Our fat faces sitting around with people that we disagree with on 99% of the issues, right? I mean let’s face it. COVID kind of did us a favor this year. Not letting us have Thanksgiving after this tumultuous election. And the last four years, this nation is deeply, deeply divided right now. I think a lot of people don’t want to be around their family members because of the opposing political beliefs. And you can be shocked that I’m saying that, but I think deep down, we all know like, you know what? That’s

Good point. That’s probably a good point. And the other Outside of that is this, where are the middle of a global pandemic? So it doesn’t matter. This isn’t a Democrat thing. This isn’t a war on Thanksgiving. This Is common fricking sense. Something that Republicans said by too long before I was even born. That’s what we’re dealing with here. Charlie Kirk is not an idiot. He’s smart enough to understand that he’s a grifter. Buddy’s not smart enough to come up with good arguments for anything or you, he looks down at one point, it was like in the 1962, it like, you looked up one thing to support your point. You took it out of context and you had to write it down because you can’t remember it. And that’s literally, it was like, Oh look how smart I am. I wrote, I read a quote from somebody in a book, one quote from one person from 60 years ago. Oh, you got us, dude. You totally got us. Jesus Christ, man. And then of course you have dr. Scott Atlas, who is Donald Trump’s favorite? Uh, uh, COVID uh, task force member because he’s the only doctor willing to go out there and say absolutely stupid stuff like he did earlier this week, when he went on Fox news and said, well, you shouldn’t listen to the COVID regulations for Thanksgiving. It could be, it could be elderly people’s last Thanksgiving and you want to spend it with them. So don’t worry about COVID. Yeah. If you take this moron’s advice, it’s going to be their last Thanksgiving.

Look, you can do a virtual Thanksgiving. Could do. If you wanted to a socially distance Thanksgiving, You know where you’re The driveway and the families in the house, whatever it is, but you don’t go near them close enough to spread germs. I understand it’s difficult. You know, I I’m In a more unique situation. Most of my family lives within like five minutes of me. You know, we, We all throughout the year and this is why I’m not a huge Thanksgiving fan. We’re we’re together all the time. Not obviously during the pandemic, but I’m also okay With that because I See them constantly. And I understand it’s different for people who do not live that close to their family, But it is what is, We got Delta crappy hand because we had a crappy president. We had somebody in charge who refused to do a single national thing to get this under control. And we have to live with the consequences. You know, we won’t abolish the electoral college. We’ll the electoral college gave us Trump. Trump gave us the horrible COVID response and that’s what’s killing Thanksgiving.

Every choice we make, no matter how seemingly small, Y’all say ripples on a pond folks, ripples on a pond, it’s going to get bigger, our inability or our, Our refusal to address the fact over the years that the electoral college is an archaic and inherently racist institution Gave us the COVID response. If you will. It did Our inability to get rid of the Grifters, our inability to crack down the social media outlets on the COVID misinformation, all of this combined. That’s what launched the war on Thanksgiving. Charlie Kirk can go out there and say, dishes, the Democrats taken away. My Turkey, all he wants that doesn’t make it true. Charlie Kirk needs to worry more about the war on whatever the hell was happening on the top of his head. There is no war On Thanksgiving just as there is no war on Christmas, but trust me, week and a half from now, every Republican’s going to be out there talking to us about the war on Christmas. Just like they’re already talking to us about the war on masculinity because Harry styles wore a dress in a photo shoot, Iggy pop do that like years ago too.

Like what the, who gives a crap folks stop being distracted by the idiotic culture Wars, being perp, uh, perpetuated by these Republicans. They do that because they can’t actually talk about the real issues. They can’t talk about things that are happening. They suck at economics, they suck at environmental issues. They suck at everything. So they go to these false and faulty arguments about holidays or masculinity. What does it mean? What does it not mean? Oh, what does anything mean? It means that you can’t talk intellectually about the issues that actually affect the day-to-day lives of American citizens. That’s what all of this means. Guys, if you had anything of substance sustain to say about what’s actually happening in the United States today, you would be using your very large platforms to do so. But instead, as I mentioned, Candace Owens and Ben Shapiro are ranting and raving about what makes a person masculine. Charlie Kirk is, you know, looking like a crazy person, talking about a non-existent war on Thanksgiving. And meanwhile, over on the left, we’re talking about the need to cancel student loan debt and how that would benefit the economy. Gee, which one of those groups sounds like more serious grownups to you.