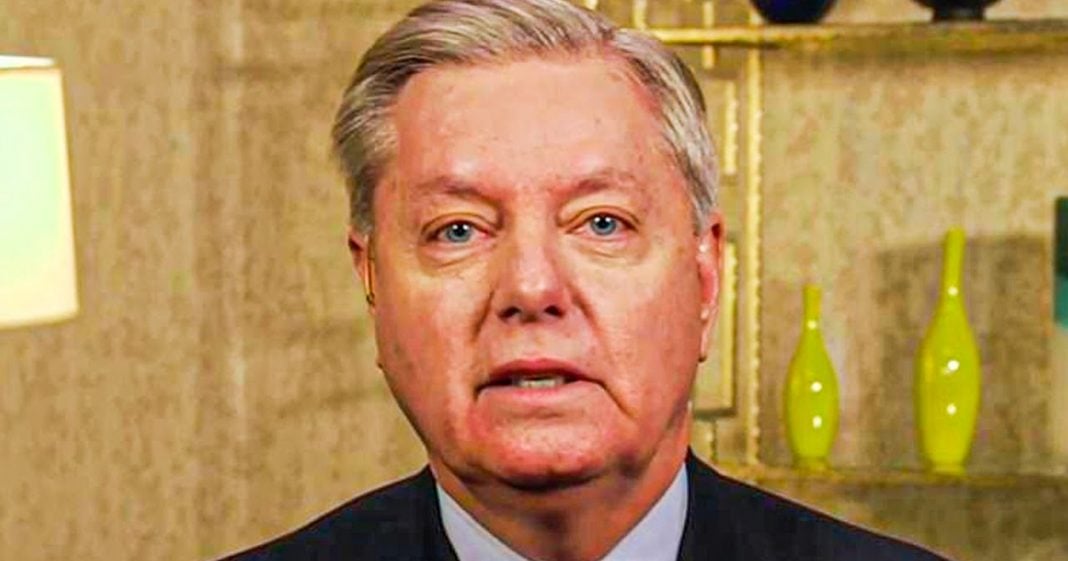 Legal experts are weighing in on Lindsey Graham’s efforts to get Georgia absentee ballots thrown out, saying that there is no doubt that this should be considered a felony. Criminal solicitation to commit election fraud is a felony in the state of Georgia, and Lindsey Graham asking the Republican secretary of state to throw out legal ballots would almost certainly fit that definition. Ring of Fire’s Farron Cousins explains what’s happening.

Republican Senator Lindsey Graham may have won his reelection by a lot larger percentage than people thought he would, but the guy is still not out of the woods yet. I mean, yeah, he’s out of the woods with the election, but he’s apparently not out of the legal woods because with the reports that have been coming in this week, that Graham allegedly phoned to the Georgia secretary of state, Brad raffinose Berger, uh, it appears now according to legal experts that Lindsey Graham 100% committed a felony when he asked raffinose burger to throw out ballots in some of the most heavily democratic areas. Because according to Graham on the phone call of which raffinose Berger says there are multiple witnesses. Uh, Lindsey Graham said, Hey, uh, these counties seem to have a lot of signature problems. So it would be great if you threw out all of those, those absentee ballots from these counties.

Can you, can you do that for us? Could you just get rid of these specific counties, which by the way, would have been the counties that gave the state to Biden rather than Trump. Lindsay Graham says, throw out those absentee ballots and that according to legal experts who spoke, uh, with law and crime is criminal solicitation to commit election fraud felony in the state of Georgia punishable by no less than one year, no more than three years in state prison. And that is exactly where Lindsay Graham belongs. Lindsey Graham should not be headed back to the Senate. Lindsey Graham should be headed to a Georgia state prison because this is pretty cut and dry. And Fox news of course is allowing Lindsey Graham in his very oddly glassy-eyed appearance yesterday evening, uh, to come on their network and say, Oh, this is how this is all overblown.

This is all bull. None of it’s true. None of it’s true. None of it’s true. There’s fricking witnesses, guy, RAF Hansberger is a fellow Republican. He’s a hardcore Republican too. Like he’s not one of those rhinos that Donald Trump loves the rail about. This is a guy who understood that his predecessor, uh, Brian Kemp use that position to steal the Georgia gubernatorial election. He didn’t say a word about it. Okay. They know what they’re doing. And yet even then even, and with all these good old boy, Georgia Southern Reba demo, Republican politicians, even then, if it doesn’t go exactly your way, you freak out and you are willing by the way, Lindsey Graham, this is the best part of it. You’re willing to literally commit a felony to move Donald Trump up to what would it be? 230 something electoral votes. He still wouldn’t win the election. He still wouldn’t win the election.

So you are literally risking your status as a free citizen to not give Donald Trump an electoral victory. That is the kind of stupidity that I’m sorry, that is reserved for the Republican party. You just don’t see as much, or as in depth, idiotic moves on the democratic side. You just don’t. This is a special, special breed of stupidity and nobody with the exception of maybe Louie Gohmert encapsulates it better than Lindsay Graham. Good luck, Lindsey. Uh, you’re going to need it because now you’ve off all of the Republicans in the state who absolutely could investigate and prosecute you for criminal solicitation to commit election fraud, lawyer up buddy. And I suggest you do. I don’t go with any of Trump’s lawyers because they know how bad it is to try to defend these Republicans. Also steer clear, Rudy Giuliani, maybe get yourself a real lawyer, Lindsey, because you’re certainly going to need one.