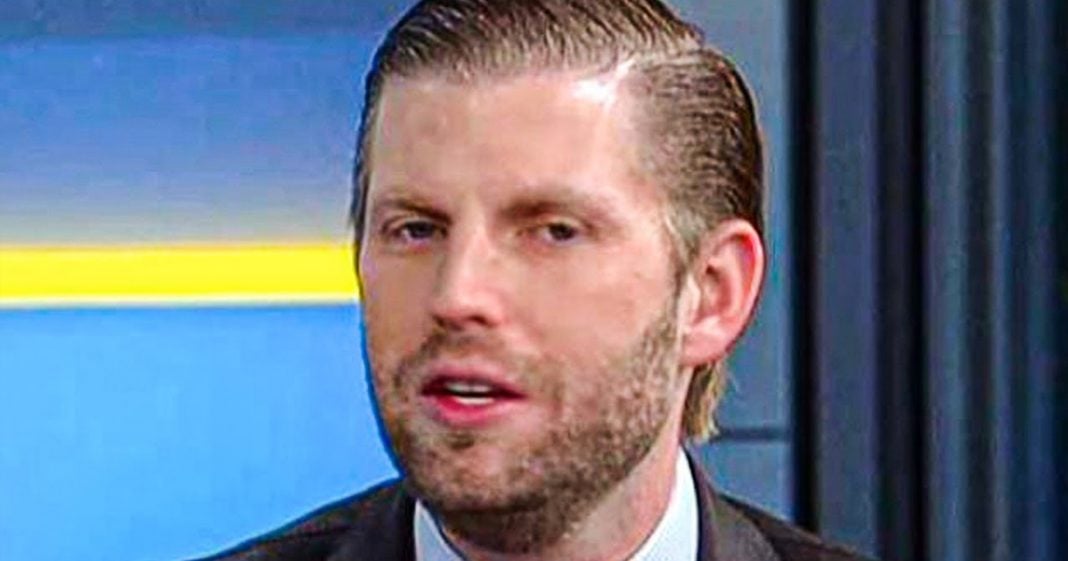 The battle for most idiotic offspring of Donald Trump has been a back-and-forth throughout the entire administration, but it looks like Eric Trump is going to walk away with the title. On Monday, Eric said that the massive crowds that showed up to rally for his dad this past weekend prove that the election is rigged, even though the two events are absolutely not related. Ring of Fire’s Farron Cousins discusses Eric’s faulty brain.

Since the beginning of the Trump administration, we hear it bring a fire. Well, me here at bringing a fire, nobody else has done this because they’re probably too mature to do it. But anyway, I have constantly been doing this back and forth about which child of Donald Trump is the dumbest. And it’s always pretty much been between Don jr. And Eric, uh, you know, Ivanka kind of keeps her stupidity behind closed doors and the other ones, I’m not gonna go after them. Barron’s a little too young. And, uh, the other ones we don’t know much about. So of course it’s between Eric and Donald jr. And for the most part, Eric has reigned Supreme. There’s been a few times where Donald jr. Uh, like when he tweeted out the incriminating evidence against himself, uh, he wore the crown for a little bit, but Eric has long been the, a winner.

And I think based on what happened on Monday, Eric is going to be the last Trump kid to hold the title of dumbest president’s son. And he’s probably gonna wear it, uh, all through the end of this administration. On Monday, Eric Trump tweeted out a picture and I sold a picture there of the super spreader rally that took place over the weekend. And, uh, all those Trump supporters, few of them wearing masks, talking about tens of thousands of people crammed in together. Uh, we’re going to see massive, massive spikes in COVID numbers within a week and a half to two weeks from this.

And he tweeted out the following along with the picture. He said, Biden, couldn’t get 10 people to a rally and went days without leaving his house. At real, Donald Trump received 11 million more votes than 2016, nearly doubled African-American support. This was every stop multiple times a day. This election was rigged from the beginning. Hey, dumb . I don’t know if you understand this, but getting tens of thousands of people to congregate together to support your cult leader, um, that in no way as related to the election at all, like at all, that has nothing, nothing to do with how people all over the country voted, but you think it does. I mean, you think that’s the thing. And do you know who I, Biden’s not doing these big crowds because they didn’t hold events like that because they knew we’re in the middle of a deadly global pandemic and that it was so much worse in the United States than anywhere else, because we’re doing crap like what your dad continued to do and hold those super spread rallies.