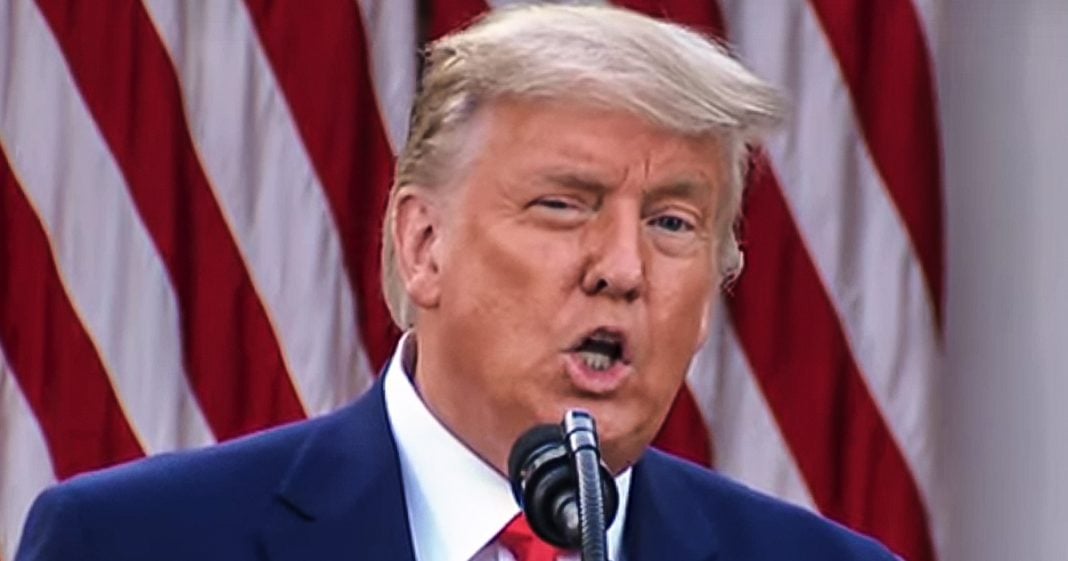 Twitter needs to understand that allowing the President to knowingly spread misinformation is dangerous, even if they put their little disclaimers on his tweets. Those disclaimers are viewed by his supporters as a way to censor him or undermine him, not as a legitimate attempt to tell people the truth. So Twitter needs to just do what everyone knows that have to do and suspend his account until he stops. Ring of Fire’s Farron Cousins discusses this.

Late Sunday evening, in fact, so late on Sunday evening that it was almost Monday morning. Donald Trump tweeted out in all caps. I won the election. Uh, just one exclamation point. I had to double check on that. Wanted to make sure it wasn’t more than that. I won the election. And then of course, as usual, Twitter had to put their little disclaimer on it, you know, Oh, this is race has actually been called a different way. Just like they do with his other claims of, wow, there’s so much fraud. And then you see the little Twitter disclaimer like, Oh, this is disputed by numerous sources. Here’s the thing. The longer Twitter allows this crazy person who currently happens to be president of the United States. The longer that they let him do these things and all they put on there as their little blue disclaimer, like, Oh, maybe this isn’t true.

Your doing real damage to this country. And here’s the thing. Oh, well we put the disclaimer on it. So people know bull. Do you think Trump’s based? Do you think his supporters, the, the morons who were at that super spreader March this past weekend, do you think they look at that disclaimer and say, Oh shoot, Oh man, obviously it’s, it’s a lie, man. He’s lying to no, they look at it and say, you Twitter. You’re trying to silence the truth. I hate you. I’m going to parlor. That’s what they do. So here’s the thing. This will not be resolved until Twitter straight up suspends, Donald Trump’s account. Turn it off. That’s what you have to do until he stops spreading this in for a misinformation until he starts poisoning discourse or stops poisoning discourse, excuse me. In the United States, you have to have to get rid of it. You have to get rid of it. This is not censorship. This is not, you know, anything like that. A violation of a first amendment. This is about stopping a dangerous person from getting people riled up to commit violence.

That is exactly what law enforcement offices and our own FBI are worried about right now that Donald Trump’s rhetoric that is lies about the election are going to spur violence here in the United States and Twitter, by doing nothing more than putting their little blue thing. It is enabling this. You can shut down his account. It’s okay. There’s nothing he’s going to do. He’s going to rant and rave about it. And then he’s going to be out of office in two months, just frigging do it. And if he behaves himself, turn it back on. I’m not saying ban him forever. But what is it is doing is dangerous. What he is doing is not protected. What he is doing is violating the guidelines of your, your social media network by inciting people to get crazy. You do not have a right to do it wherever the hell you want on somebody else’s platform.

Republicans are the ones who’ve made that possible. Twitter could suspend him. Twitter should suspend him. And I don’t care. Come at me say that, Oh, you’re a favor of censorship. Then I guess we just can’t have opposing viewpoints. No, we can’t have opposing facts folks. That’s what we don’t get. There’s not just two different sets of facts. And the truth is somewhere in the middle. No that’s opinions actually, or different sides of a story. These are facts. Facts are facts. And he is out there knowingly lying too. And that’s the worst part of it. He knows this isn’t true. He knows he didn’t win, but he thinks his base is stupid enough to think that he’s telling them truth so longer. He stays on there. The more he’s actually just insulted anyway, literally no downside whatsoever to at least temporarily kicking him off Twitter, sorry, you can’t make a cogent argument to convince me, uh, that this isn’t the best route. He is going to get people hurt. He is going to continue to deal legitimize the next administration. And that is going to lead to massive problems in this country. And we can shut it off right now. All Twitter has to do is suspend his account. It’s that easy.