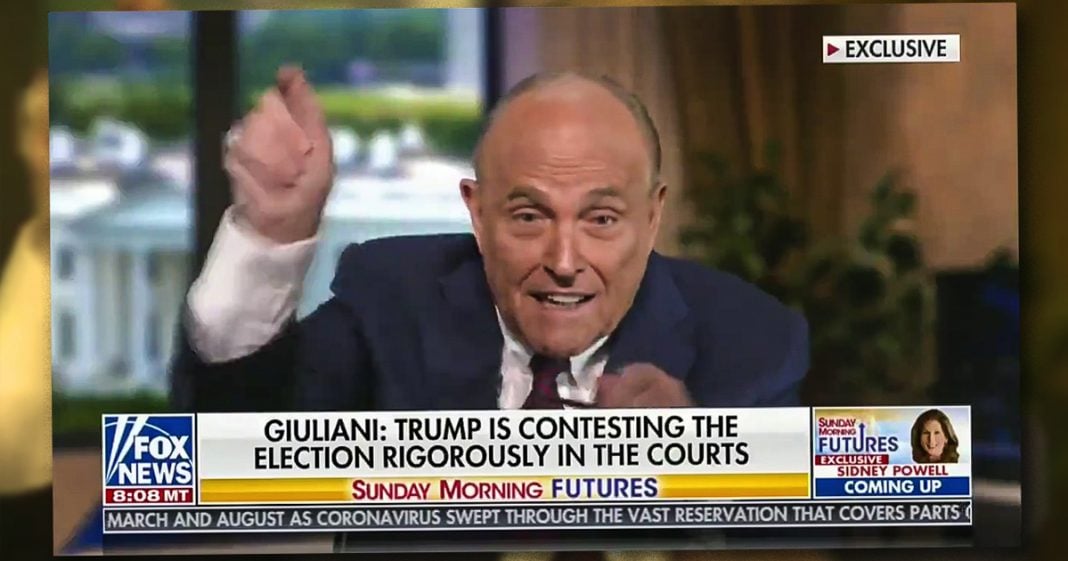 It was announced over the weekend that Rudy Giuliani would be overseeing Donald Trump’s election lawsuits moving forward, which is a good sign that Trump has completely given up. On top of that, his legal team has already scaled down some of the lawsuits to the point where, even if they are successful, it still wouldn’t be enough to overturn the election results. Ring of Fire’s Farron Cousins explains what’s happening.

Well folks, it’s pretty obvious at this point that Donald Trump is no longer taking his election challenge lawsuits seriously. And we know that because last week it was announced that Rudy Giuliani was going to be taking over as basically the leader of these lawsuits. Now, this actually came after all of the news stories about some of the law firms involved, not being comfortable, filing these suits, being worried that it was going to harm their reputation. Uh, you had Porter, right? The, the major law firm handling the cases up in Pennsylvania, they actually opted out, they filed a motion with the court to dissolve their relationship with Trump and to not have to deal with these lawsuits. So yeah, things were pretty bad for him. So he said, I know. How about Rudy? How about that guy that did such a bang up job? Uh, you know, defending me against the, the Mueller report by actually going on TV and implicating me further and criminal conduct, same thing with the Ukraine issue. Yes. Let’s have that guy. So how are things going with Rudy? I mean, he spent a lot of time on Sunday morning going through the morning talk shows. So, I mean, did he, did he say anything worthwhile or was it all a bunch of this.

Yes. Yeah. This, this is the legal mind that is totally going to win Donald Trump, the election and the printers. And there’s a good balance. What, what, what is that? What is, what is the noise he’s even making? What does that have to do with the ballot? Are they shredding the ballots? Are they using an electric male opener to such a thing exists? I don’t even know. I don’t know what’s happening in that clip and neither does anybody else who’s seen it. You know, that clip made the rounds on Sunday morning and sure. It’s a three-second clip taken out of context, but it does also show how crazy Rudy Giuliani is. So I like it. And that’s why we chose to show it to you. There’s actually several other clips, uh, from not just Giuliani, but other members of Donald Trump’s legal team and, um, what they did on the Sunday shows.

And they’re all just as ridiculous. Like these people don’t have a legal leg to stand on yet. They’re still out there telling us how we got those, but here’s the truth. Trump and his lawyers have actually scaled back some of these lawsuits. And in Pennsylvania, they have scaled the lawsuit back so much, like reduce the claims that even if they were successful, it wouldn’t even overturn the state Biden would still win it. See what I mean? When I say they’re not taking these things serious anymore, it’s because they’re not, they’re only doing it as was reported last week as theater, this is show Donald Trump can show his base like, look, I’m still fighting for you a lie, or I’m going to tweet out crazy things because I’m a crazy person. And his base has high like that. Like they know they’re going to lose. They know they didn’t win.

It doesn’t matter how many times Trump tweets out. I won the election. He knows he didn’t, it doesn’t matter how many lawsuits they filed. They know that even if their lawsuits are successful, it’s not going to over overturn the results. Biden won the election. Trump knows it. Giuliani knows it. The only problem is they have to keep telling their base that that’s not true. And that is more insulting to the Republican base than anything I have ever said to them. One of today, video sponsors is privacy. And right now they have a wonderful offer for all of our ring of fire. Viewers, go to privacy.com/r O F sign up for your privacy account and you will receive $5. privacy.com. Their service is absolutely one of the most vital in an online world today, especially during the pandemic, everyone is encouraged to stay home. So we’re ordering more things online.

And so your bank account information is more vulnerable than ever. Privacy gives you security. This is a product that I use all of the time. And here’s why if you have ever had your bank account information stolen, if it’s been part of a data leak, that is a massive headache, trying to get your money back, trying to repair your credit. Privacy helps take away some of that concern. What privacy does is it provides a browser extension, or you can go right into the website or into the app, and it can create a virtual bank account or credit card number. It could be a temporary number that only is used one time, or it can be merchant specific, meaning you can create a bank account, a card that only works for one particular website. So if that account happens to get hacked or has a massive data breach that card number no longer works with any other website, that is how privacy helps protect your bank account information in an increasingly insecure online world. So again, go to privacy.com/rof. You get $5 free just for signing up, or if you don’t want to type it in, just click the link at the top of the video description below.