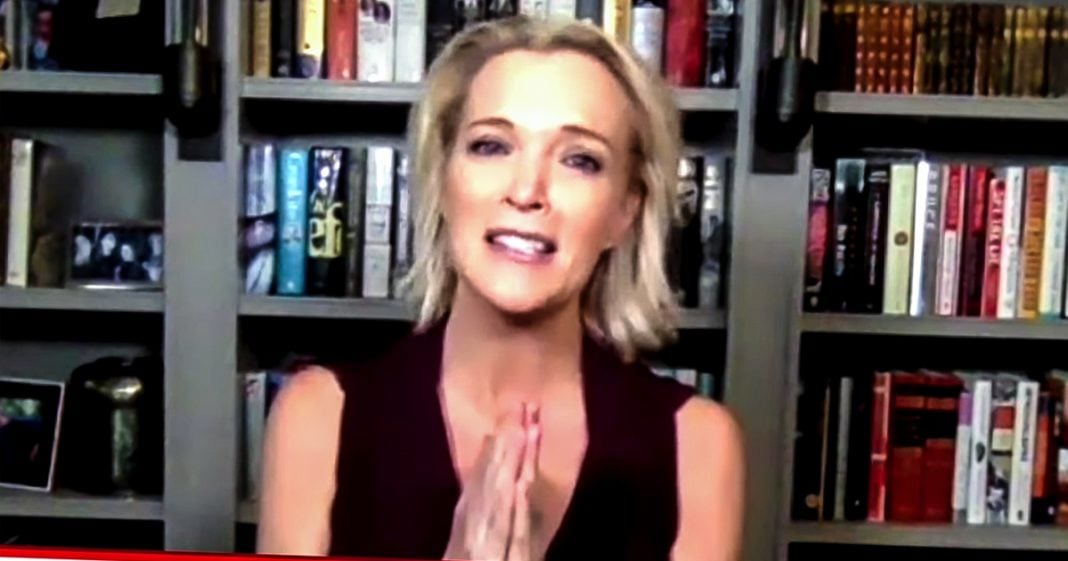 Former NBC and Fox News host Megyn Kelly whined to disgraced former Fox News host Eric Bolling this past weekend about the fact that liberals helped divide the country by claiming that all Republicans are racist. No one on the left ever made such a bold and all-encompassing statement, but facts have never actually been Kelly’s strong suit. Ring of Fire’s Farron Cousins explains what Megyn Kelly is saying and why she’s proving everyone else right.

Former Fox news host Eric Bolling talk to former Fox news host, Megan Kelly and former NBC hosts, Megan Kelly, uh, this past weekend about Biden and the Democrats plan to bring unity to the country. And both of them think that this is an absolutely stupid idea because they don’t think Republicans should play nice with Democrats. And these two idiots Actually say that all Of the division in this country today, sure. The Republicans share some blame, but dang It. Those bloodthirsty Democrats are, are also to blame because, you know, they spent the last four years calling every single person who voted for Donald Trump, a racist. Now here’s the thing. And I’m going to read their exact quotes in just a second. But let me go ahead and state this no serious person, no person of any kind of influence ever said. Every single Trump supporter is a racist. In fact, I’m pretty sure the times we’ve discussed that, we’ve actually mentioned that not every Trump supporter is a racist. And I know for a fact I’ve said that in countless videos here, so no, Megan, you’re straight up lying on the premise.

So anyway, here are the exact quotes from these two morons who both by the, you know what, I’m going to read the quotes first. I’m going to get into that in a minute. Eric Bolling prompted her through his new home, on Sinclair broadcasting. All of the sudden, Just a quick note for everybody. It’s not all the sudden, it’s all of a sudden, okay, can we stop saying all the sudden, All of the sudden they want it Unity on the left. When they’ve spent the last four years calling everyone who’s a Trump supporter, misogynist or homophobic or xenophobic or bigoted, or the list goes on and on. And then Megan Kelly responded. Let’s get real. When you tell 71 million Americans that racist, bigots homophobes transphobes and sexist year after year, you’re going to make enemies. You’re going to make enemies lists of anybody who supported Trump. They’re not really feeling unified with you. The only thing you can try to do is be less White.

That’s who you’re dealing with. You cannot listen to these people, call names anymore. I think the average Americans get very jarred when they hear these nasty terms, which are meant to S to silence. Um, Holy crap, Megan, there’s actual Racists and homophobes and transphobes and xenophobes who do support the president. And they have been very Vocal, very vocal over the line Four years and rightfully so. They have been called out by those of us on the left. And you know what else we’ve done though? Megan, We have also called out the people who defend these people, because That’s where the distinction comes. We don’t ever say that all Trump’s supporters are all Republicans are these things. Just the ones who obviously are these things and the ones who defend it. Because if you defend it, you’re giving it your approval. If you give it to your approval, then you say It. That’s how that works, Megan.

And to be honest, I don’t agree with this idea of unity. You know, I don’t want to be unified with These idiots, with their big Confederate flags on the back of their truck, the Confederacy, which by the way, only lasted four years in American history. But in our heritage, no, it’s really not it’s racism. And that’s why you’re doing it. And Megan Kelly, by the way, is the same person who threw a hissy fit on Fox news many years ago, because somebody said Santo wasn’t widened, Oh my God, She went on a friggin tear. Cause that’s how fragile Megan Kelly is. And her whiteness. Now the thing I almost said earlier and said, I’ll get to that later. Here it is both Eric Rolling. And Megan Kelly could have emerged as good, decent human beings and had successful careers following their time at Fox news, Eric Bolling Son died of a drug overdose. And that was very Sad. Megan, Kelly, I mean, hell, there’s a movie About what happened to her at Fox news and the harassment and all of that. She could have been a hero,

But both of them, Of these tragedies and these horrific things happening to them, instead of taking it and becoming good and decent people from it, they went on to be even bigger. Scumbags. Eric Bolling fired from the network for sending lewd text messages, lewd pictures, Uh, two people, Megan Kelly ends up losing her job at NBC because dang it. She can’t quite shake that little racist Bone she got in her. These are horrible human beings and they’ve had horrible things happen to them, but they took the wrong lessons from him. They didn’t take these as opportunities. They took them as the chances to play the victim to say, poor me, everybody, shower me with your sympathy. So I can turn around and go to even worse things than what I was doing before. Or these two idiots could have been decent people.They could have emerged better and stronger and more influential than ever Instead. Both of them now relegated to networks that nobody is paying attention to. That is their fate. And that is what they deserve.