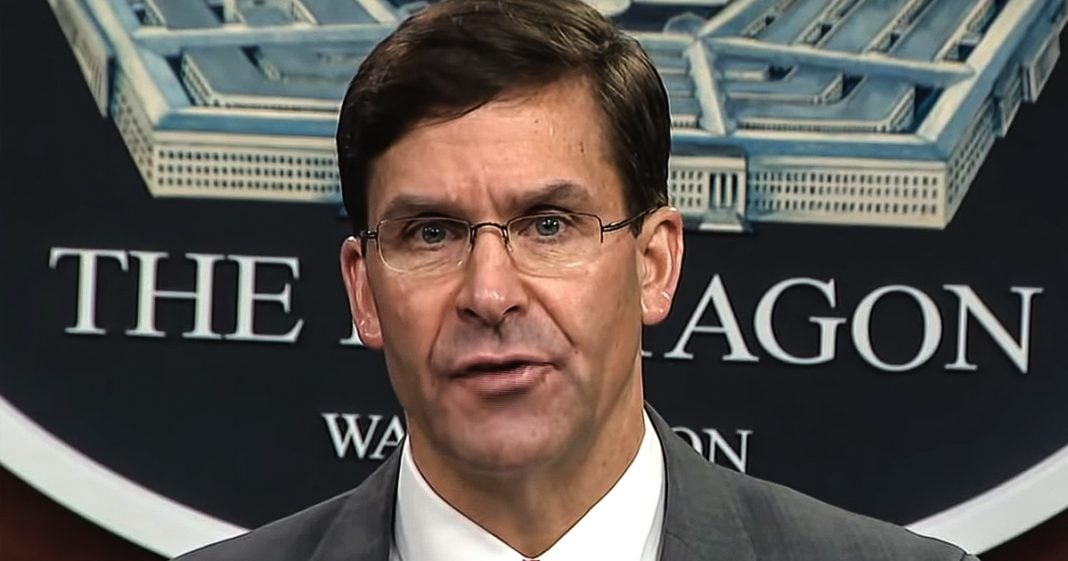 Donald Trump is currently cleaning house at the Pentagon, an odd move considering all of these people are losing their jobs in about two months. But these moves are starting to cause concern among the public who believe that Trump is putting his loyalists in place to do something dramatic. But what if this isn’t as sinister as it seems? Ring of Fire’s Farron Cousins discusses the possibilities of what Trump could be doing.

So an unsettling trend began this week on Monday when Donald Trump fired defense secretary, Mark Esper. And then that was followed by a flurry of resignations and other firings of high ranking department of defense, Pentagon officials. And it’s kind of left everybody, scratching their heads as to what the heck is going on. Why, why is this happening now? And by the way, these people are being replaced by some of Donald Trump’s loyalists. You’ve got people in there taking positions, uh, people who have a history of Islamophobia statements, uh, Fox news, regulars. I mean, these are people who are really, really dangerous individuals. And they’re also people who are very loyal to Donald Trump himself. And we don’t know why this is happening. So there’s a lot of speculation. There’s a lot of fear. And to be honest, I can understand that fear, you know, this is the department of defense.

This is the Pentagon. If Donald Trump was trying to launch a legitimate coup to stay in office, you’d kind of have to have the Pentagon at your back. And, uh, he may have the Pentagon at his back at this point, at least the high ranking officials, uh, literally everybody else down the ladder, probably not. So maybe that’s not as big of a threat as we think, but it is still something to keep an eye on because that’s terrifying. That thought is horrifying, but it, it also raises questions. Why are you firing these people when they’re all going to be losing their jobs in two months anyway, like Joe, Biden’s going to be sworn in and then all these people are going to be gone. So what possible use could you have, you’re not going to be able to launch a new war in two weeks months, but you could probably salvage things enough with us foreign policy and us military policy to leave a big, giant mess for Biden to have to clean up when he takes office.

And, Oh my goodness. I think we just stumbled upon what’s actually happening this isn’t. I think I hope, uh, about, uh, staging a massive coup here in the United States. I don’t think Donald Trump has the stones to pull that off. I’m praying he doesn’t, uh, I think this is more about, let’s try to make a big old mess that Joe Biden’s going to be left with and let’s see what happens in. Let’s see if he can handle that, that, well, here’s the thing. One of the things that Donald Trump and Mark Esper, the, the chief he fired on Monday disagreed upon was that Trump had mentioned wanting to get troops out of Afghanistan and Syria and Esper said, no, no, no, can’t do that. So, yeah. Could Trump be possibly trying to sabotage Biden by bringing us troops home? Because if so, I’m going to say like, that’s a form of sabotage that I’m going to support.

We shouldn’t be over there. We need to bring all of our troops home from the middle East. This is an endless quagmire with no clear objectives anymore. We don’t know what we’re doing or why we’re there. All we know is that it’s creating a ton, a ton of money, making opportunities for us, military contractors. So if Donald Trump is putting loyalists in place, so that they’ll approve his plans to bring troops home, then I’m all for it. Look, the guy is evil. Absolutely. And he’s horrible at his job. And he’s responsible for hundreds of thousands, if not more deaths here in the United States and overseas. But if we can get our troops home, that’s going to be a good thing that Trump did. I do not believe for a second that Donald Trump has any kind of peace monger. I do not believe that he is any kind of pacifist.

We have seen just as many atrocities under Donald Trump happening overseas, as we have under the past few presidents. Okay. He is not any different. What if he brings these people home? He can go out of office. He can leave office with a small victory. That’s a significant victory, to be honest, but if that’s not, what’s going to happen, then we probably should be worried. That’s the only possible good thing Trump could be doing by firing these people and replacing them with loyalists. If it’s anything other than that, it’s going to be complete and utter chaos. And unfortunately we have to just wait and see which one it’s going to be. And that is the scariest part of all of this.