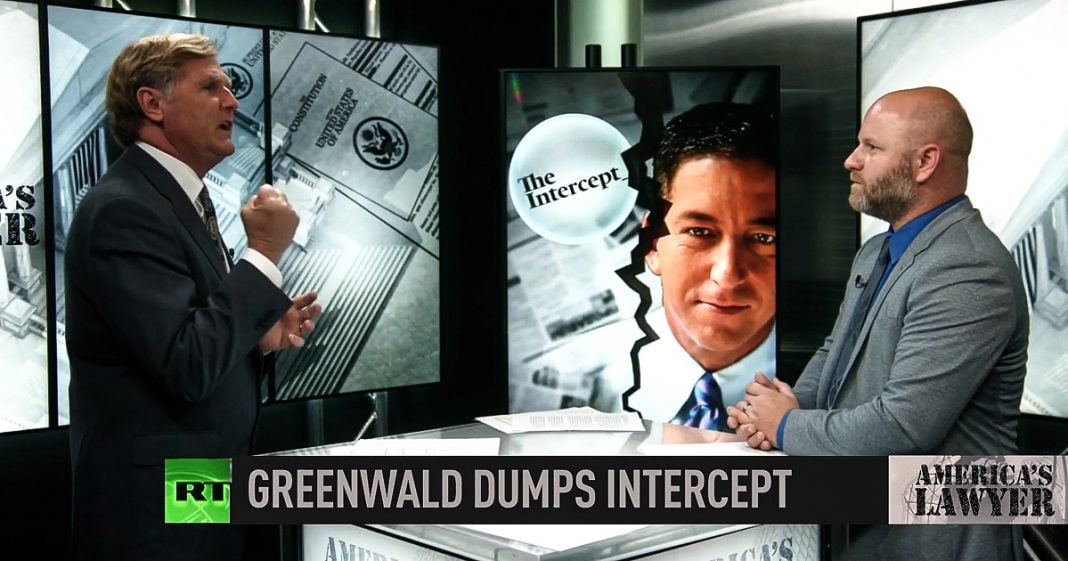 Mike Papantonio:             Journalist Glenn Greenwald announced his abrupt departure from the media outlet that he co-founded recently, after he claims the editors tried to censor his article about Joe and Hunter Biden. You know what, I agree with him. You know, Jeremy Scahill, we’ve interviewed many times, started the Intercept with Greenwald. You may have a different take on it, but as I’m looking at it and I’m following all of the players here, it’s the same players we used to talk about this, what’s her name, Betsy Reed. Betsy Reed was the editor who said, no, we won’t even let you do a story where you lay out both sides. Where you say this is, this is the, this is the hit on Hunter Biden and how it ties up to Joe Biden. And this is where we think that’s ridiculous and this is the real facts. Wouldn’t even allow him to do that because they were trying to protect the democratic nominee and he and Matt Taibbi, and a whole host of journalists are getting sick and tired of not being able to tell the whole story because of political ramifications. What’s your take?

Farron Cousins:                  Just to be honest, because I, I don’t know that I think it’s because the Intercept was trying to protect Joe Biden. I mean, you’ve had plenty of reporters from the Intercept over the last two weeks, send out huge lists of, hey, here’s all the times we’ve beat the hell out of Joe Biden. So that argument, when you look at what they’ve published, it seems odd you would try to, or he would try to make that, excuse me, because they’ve published anti Biden things. They published lots of anti Biden things. We’ve talked about.

Mike Papantonio:             Why do you not put both sides on the, on the table and say, we think this side we, we don’t agree with it, but you have to know what the talking. The emails for example are real.

Mike Papantonio:             And no, they didn’t come from China or Russia. And this, you know, we can look at his we can look at his, at his, at his internet activity. We know what’s going on here. Why don’t you tell the story and then make a conclusion or let the reader make a conclusion. This is censorship, Farron. I don’t care how you dress it up. Betsy Reed did the same thing with Nation. She did the same thing with Nation. We, I remember a couple of stories we did on that, where the Nation, you know, they kind of get it right, but they’re afraid to actually tell the whole story.

Farron Cousins:                  Well, see, it’s the fear. I think, I think you’re right about that. I think it’s the fear that Betsy Reed had. She didn’t want to at all give the impression either one, this late in the game that, hey, maybe you are tanking it for Biden. David Sirota, we covered all kinds of stuff he did about Hillary in 2016.

Farron Cousins:                  There’s all kinds of things that she could have been afraid of. I’m not saying any one of them is a good thing. I’m saying these are possibilities.

Mike Papantonio:             This guy, Glenn Greenwald, started this Intercept because he was saying journalism is dead. Okay. Journalism is controlled by advertisers. It’s controlled by, by political contacts where you have these political contacts that are friends with the editors, with this, maybe a TV station or network or radio. He says, it’s dead. He’s not the only guy saying it, Farron. Matt Taibbi says it’s, it’s, it’s history, real journalism is history. It’s no, no more than corporate propaganda at this point and I think that’s what he reacted to. Don’t you? I mean, what’s your take?

Farron Cousins:                  And says, you know what, holy crap, that’s very lucrative. So maybe, maybe there were other things happening behind the scenes that we don’t see. I’ve read these same emails. I don’t get the sense that this editor was trying to say, we have to protect Joe Biden.

Mike Papantonio:             I, I disagree with you, Farron. You more than anybody represent that journalist who’s willing to tell the story, whether you agree with it or not, whether it fits into your political ideology or not. That’s why we do this segment. Right?