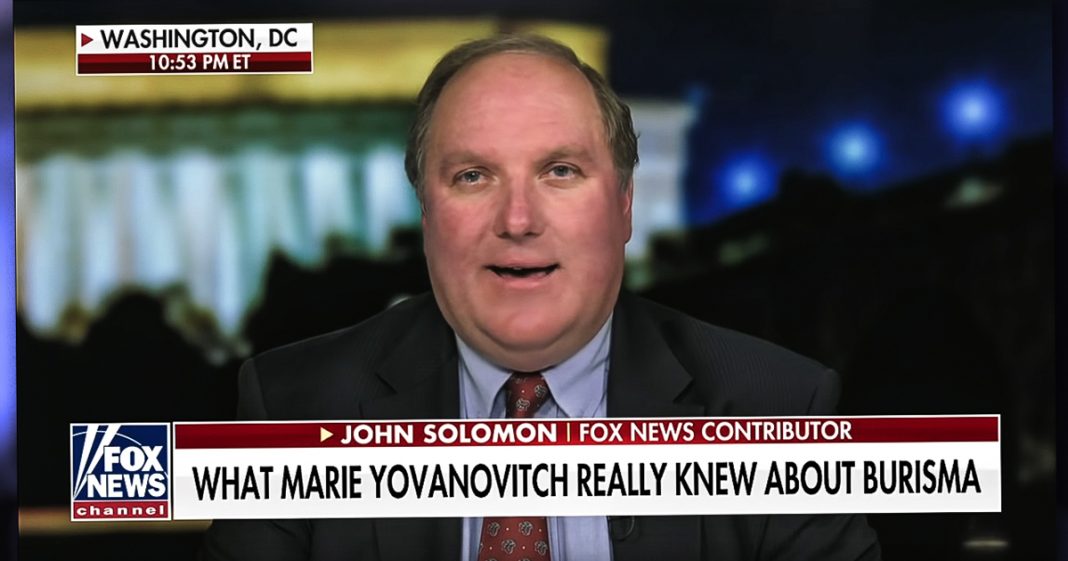 The Daily Beast has confirmed that Fox News has parted ways with conspiracy theorist and misinformation peddler John Solomon, one of the chief architects of the phony Ukraine scandal that the network tried to push about Joe Biden. The network could be trying to clean house as a new administration enters the White House, or they could have just grown tired of his antics. Ring of Fire’s Farron Cousins discusses this.

According to a report from the daily beast. Fox news has apparently parted ways with one of their paid contributors who was essentially a staple on the network for many years during the Trump administration for pushing conspiracy theories. Uh, the former contributor is named John Solomon. Uh, he has also been in charge of video at the Hill. He has his own website, just the news. And he is actually still appearing apparently on the Fox business network. But Fox news, the parent channel did confirm to the daily beast that they are no longer paying mr. Solomon to come on their network and, and spew his ridiculous views. And he hasn’t appeared on Fox since I think July or June of this summer. Now here’s the thing. If you’re not familiar with mr. Solomon, he has been one of the, uh, people that goes on Fox all the time to talk about the deep state, the deep state plot, the spy gate, all of those attempts, apparently allegedly to, to take down Donald Trump, to spy on him and his campaign and all those things that Trump loves to talk about.

Uh, he wrote a book the Donald Trump did, uh, end up promoting, I think, on his Twitter account. And of course he was one of the people who was in contact with Rudy Giuliani and his associates, uh, about the Ukraine story. So he was most recently going on Fox news and Fox business, uh, to talk about the Ukraine conspiracy theory, and, you know, Hunter Biden is doing things, making money for, for having a job that he probably wasn’t qualified for. He didn’t illegally obtain the job and, uh, he wasn’t getting any money under the table, but he just probably shouldn’t have had the job and job overpaid him quite a conspiracy, right? Like, Oh my God, a guy’s making money from a job. He shouldn’t have go up to wall street. You’re going to see a lot of that, like walk into any bank in the United States.

And you’re going to see people making a lot of money when they clearly shouldn’t be, but nevertheless, sure. Whatever. So Fox news kicks him out and, uh, there’s a couple of theories floating around as to why this could be obviously one, we have a new administration coming in Fox news has some stiff competition from the one American news network own. And, uh, one thing they have that own doesn’t have is occasionally real actual journalism. I mean, he, Fox does have a room filled with real news people. And as we’ve known about for a year or two, the real news people are super sick and tired of the opinion. People like Hannity and Tucker and Ingram, and pretty much everybody on the air, uh, getting to drag down the network’s credibility by spouting conspiracy theories, like what Solomon does. So maybe that rift coupled with the, we’ve got to do something to a little bit of credibility to set us apart from own.

Maybe that’s what this is about. Maybe it’s just, we don’t want to pay this guy anymore. Maybe he got too crazy for them. Kind of like Rudy Giuliani appears to have gotten who knows, but any day that a conspiracy theorist who’s just spouting lies and misinformation, uh, loses his job. This is probably a pretty good day, right? I’m not going to shed a tear for this guy. He’s doing just fine. He is going to continue making money with his grift. A grift that he likely knows is a grift and Hey, he’ll move on. We’ll all move on. And hopefully fewer people will buy into his propaganda. Now that he’s not on a major network anymore.