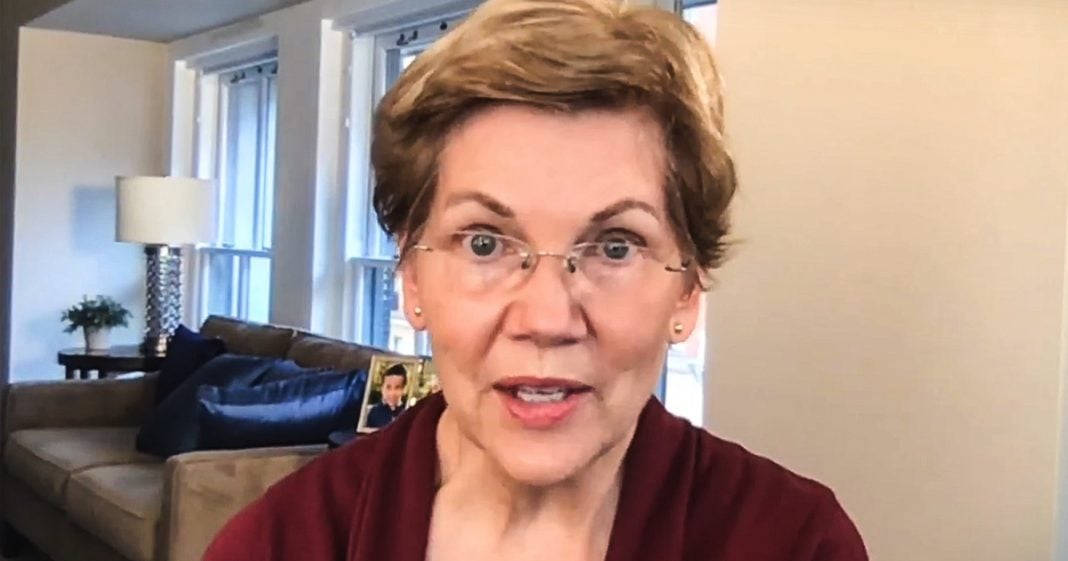 Senator Elizabeth Warren might be frozen out of Biden’s cabinet, but that isn’t going to stop her from trying to push the incoming administration to do what’s right for the American public. This week, Senator Warren posted a Twitter thread containing a list of things that Biden could do on day one as President, and the first item on the list is cancelling student loan debt for millions of Americans. Right now Biden’s plan only cancels a portion of debt for a portion of the public, and that simply is not good enough. Ring of Fire’s Farron Cousins discusses this.

Trump might still be contesting the results of the election, but Joe Biden is moving forward and the democratic party, uh, for the most part is moving forward. We’re moving forward as a family. That’s, that’s fighting one another, but we’re still all moving forward. We’re just trying to figure out the best way to move forward. Uh, this week, Elizabeth Warren tweeted out a list of things that Joe Biden and his administration could do day one to actually make the lives of Americans better. And I, you know, saying that out loud, I get to what she said, Nemo, but just saying that out loud, like these are literally things that would make people’s lives better. And we have a faction of the democratic party who says, well, hold your horses there, but we don’t want to get too extreme in making people’s lives better. Like the entire Republican party is on that bandwagon too.

Don’t get me wrong Republicans as a whole say no, but you still have like a good half of the democratic party that says, yeah, I don’t know. We can do that. And that’s crazy. We’re talking about policies that would actually help a majority of people in this country and not just those at the top. It’s insane that this is even a conversation that we have to have. It’s insane that Elizabeth Warren even has to push for these things. But the biggest one, the one at the top of her list, obviously huge issue, uh, canceling student loan debt. Uh, Joe Biden has hinted at, you know, maybe forgiving $50,000 of student loan debt. Uh, if your family’s income is, you know, below a certain threshold, uh, and then they tweeted out again like a day or two ago that it’s only 10,000, that could be forgiven. Uh, again, depending on your family’s income. And you know, maybe college is going to be tuition free for certain Americans depending on your family’s income. No, and this is kind of, I think why Elizabeth Warren started doing this because there’s like, you can’t put equations into it.

You can’t means test this Thing and she didn’t Say this, but I’m going to say it. And here it is because the threshold they have for most of these programs is $125,000 as a household. Okay. That may seem like a lot of money to some of you. Some of you may think, well, that’s not much at all hundred and $25,000 is a decent income, depending on where you live in the country. If you’re living in New York city and you’re a family that has two kids, $125,000 is peanuts. If you’re living in Alabama, $125,000, you’re probably the richest person in that County. See what I mean? When I say you can’t means test these kinds of things like where I live right now, $125,000 is a solid middle-class income Without putting much money into savings. Because The cost of living here where I in Florida, because we’re so close to a coast. So coast close to the beach, uh, is astronomical.

That’s That’s the point. If he means test this thing for $125,000, There’s people like me, I’m not going to Qualify for it. Most likely, depending on the year, I do a lot of contract work by the way, which is why my income is now over that. And I’m being honest with you on this, but I still can’t. I still can’t even pay my medical debt because the cost of living here is so crazy expensive. It’s sure I could move. And if I move, I lose my job. My wife loses her job. We lose the support network of family that we have here to help us with the children. God forbid we ever need it. So it’s not just as simple as we’ll pack your bags and move someplace cheaper. We’d love to, by the way, we hate it here, But we’re job locked at the moment. Nevertheless, you can’t Means test any of these programs because everybody’s means are different. And even if you have identical means to someone else, depending on your geographic location, it’s completely different. Me making $125,000 in Florida is not the same as somebody making $125, a thousand dollars in South Dakota Coda.

If I Is making $50,000 here and somebody was making $50,000 in New York guests, one of which one of us would be considered to be an extreme poverty. They would, it’s different all over the country. So this plan that Biden does have is not good enough. And that’s why Elizabeth Warren is out there tweeting saying, these are things you do day one. She didn’t say forgive student loan debt for people who have X, Y, and Z, and had to serve a year in service because that’s also part of one of his plans. She just said, forgive student loan debt. That’s it because that’s the plan. That’s what you have to do. I don’t care if we end up forgiving debt for somebody who has $20 million in the bank, Who cares, it doesn’t matter. That’s what equity is all about. Actually See that’s what equality is all about. And a program like this does have to be Equal. So maybe we End up sending a billionaire’s kid to college for free. Oh, no cool small price to pay for being able to say, send millions of underprivileged kids to college for free. I would say this argument that we don’t want millionaires and billionaires to benefit is stupid. Stupid people make those arguments. If you’re going To put these programs in place, they have to go for everybody. That is the only way they can work. Once you install means testing, it allows the opposition. Once they retake power, because the power always shifts, they can change. Those means tap.

Did you think about that? Say we start forgiving student loan debt For anyone. You know, we forgive $10,000. If you make less than 125,000 a year. So let’s say a Republican comes in and he says, okay, you know what? I’m going to change the formula a little bit. We’ll forgive 2000. If your family makes below 50, 50,000 a year, you can alter a means test. You can’t alter very easily a blanket policy. That’s the difference. That’s the distinction. And that is where we have to get to right. Means testing any of these programs. Debt-free college student loan debt, uh, Medicare like, Oh, well, if you’re a certain age, no, it’s either for everyone or it’s simply we’ll get struck down or reconfigured by the next person to come to that office. That’s what Biden is setting himself up for. And Elizabeth Warren is trying to push him as hard as possible to say, listen, it has to work for everybody or else it doesn’t work for anybody.