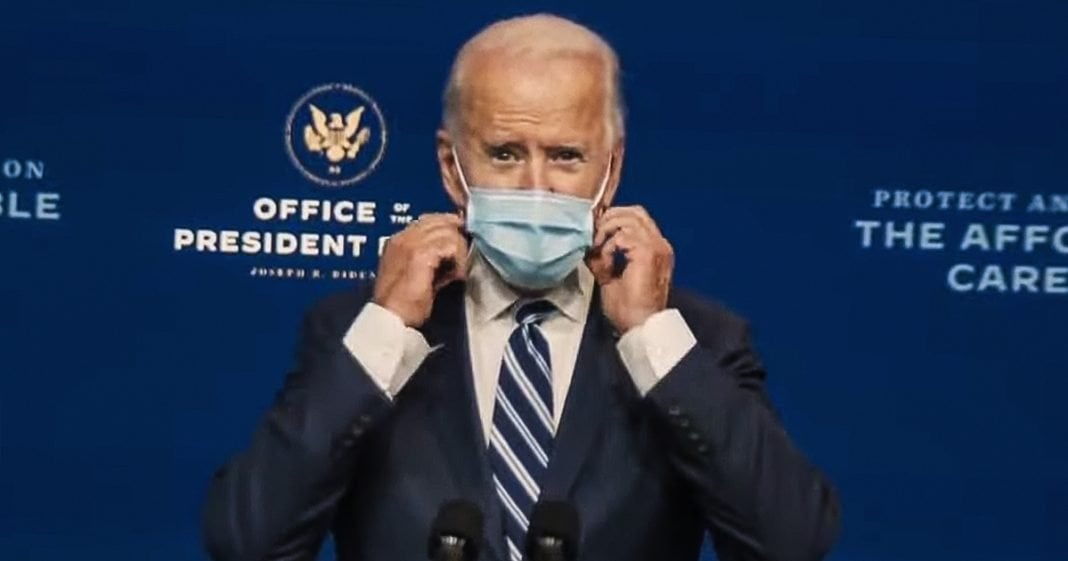 Joe Biden ran for President on a platform that promised to return America to “normal.” But the problem is that “normal” hasn’t worked for millions of Americans in decades. Normal is leaving people to die in poverty with no lifeline; Normal is out of control medical expenses that leave people choosing between their medication and food; Normal is endless war. None of this is acceptable today, and Biden needs to create a new “normal” that actually works for Americans. Ring of Fire’s Farron Cousins discusses this.

One of the themes of the 2020 election on the democratic side was let’s return to normal. And while that wasn’t an official campaign position or platform of the democratic party, it wasn’t even something that was necessarily mentioned in most of the democratic ads. It was something that was talked about extensively among the pundit class and on cable news. Well, here’s the thing now, the Biden’s one now that we don’t have to worry about, Oh, we can’t say anything bad because it may hurt his chances. Not that that stopped any of us anyway, but now that we can be a little more aggressive, I guess you would call it in our criticisms here. Let me go ahead and take some time here to explain that returning to normal, what the pundit class with the cable news class, when MSNBC says, Oh, let’s return to normal normal didn’t work normal. Hasn’t worked for decades for millions upon millions of people in this country. And let me explain what I mean by that. Cause there’s actually quite a few good. Op-eds about that just this past week, a really great one in the Boston globe, but let me explain something that I had explained during the campaign.

My life, my individual personal life did not change from the way it was during the Obama years and the way it was during the time Trump years, there was no difference in my life. I still had medical debts, still struggled to pay bills. Nothing got better. Nothing necessarily got worse for me, either. And millions of Americans were in the same boat, right? We’re still struggling. It’s still hard to pay student loan debts. It’s still difficult to be able to move upward in society. It’s very expensive being poor. And I know that because I finally, within the last year started making more money. So what was the first thing I did? I went back to the dentist for the first time in 10 years. And I have spent over $5,000 this year on dental work. Why? Because I didn’t have the money for 10 years to be able to go for routine dental maintenance. And I’m still paying for it. Got another one sitting right here, just came in $612 bill all because I couldn’t afford for so long to take care of these little things. Like I said, being poor is very expensive,

But It’s the same under Trump, as it was under Obama, as it was under Bush things normal, this normal you claim doesn’t exist because it doesn’t work. What is normal? Are you talking about the normal where we don’t have a president that goes on and has meltdowns and insults American citizens? Is that the only thing you qualify as normal? The answer to that is yes, by the way, because look at all these people crying for a claim, a return to normal. There are people who are just fine. People who don’t struggle from month to month, people who don’t live paycheck to paycheck say, I want to return to normal. I don’t want to have to think about politics. I don’t want to have to think about policy near Trump’s annoying me. Cool. I would Have loved to have just been only annoyed for the last four years for the last 12 years for the last 20 years.

But I wasn’t like Of Americans. I was sitting here wondering, how am I going to pay for this, this, this medical incident I have, how I’m gonna, how am I gonna pay, you know, $1,500 out of pocket for a root canal? How am I going to do any of these things and raise my family and make the mortgage payment and be able to make the car payment and be able to make the cell phone pay. Yeah. Payment after payment, after payment, after payment, when there’s no change in your financial situation. Yeah. Cause bills increase every year. Your, your cable or your satellite plan that goes up every year, your Netflix plan that goes up every year, Your credit card interest that goes up all of these Payments, they increase each year. But when we’re in a situation where there’s not any kind of upward mobility for the working class, our paychecks, aren’t going up every year or they’re not going up enough to keep up with inflation.

So that returned The normal doesn’t work normal. And this, I actually have to read this from the, uh, the Boston globe here, normal in America was horrible for too many people. Normal was widespread hunger and homelessness. Normal was the world’s highest prison population and incarceration rate normal was police brutality, racial injustice, inadequate housing and schools, lack of access to healthcare and violence against women. Normal was the centuries old white resentment. Trump exploited as a candidate and emboldened as president after four regressive years, we should never want to return to what was once considered normal. And that is the truth. The other truth is the Joe Biden has been given a tremendous opportunity here. Unfortunately, he has not been given all the tools that he needs to seize the moment as It is Joe.

Biden’s not going to be able to take us forward in a way that’s going to put us towards a new normal, a better normal. He has been giving the same tools that Obama had, the same tools that were available during the Trump years. We’re not going forward. We’re going to go backwards to that old normal. Why? Cause Chuck Schumer is still going to be the minority leader in the Senate because Nancy Pelosi is still going to be the speaker of the house because Democrat in name only Joe Manchin is still going to be sitting in the Senate, working with Republicans. Instead of Democrats, they’re going to prevent us from creating a new normal. And instead these millionaires are going to stick us back into the old normal, where the only difference between now and then is that Joe Biden’s not going to say mean things on Twitter.