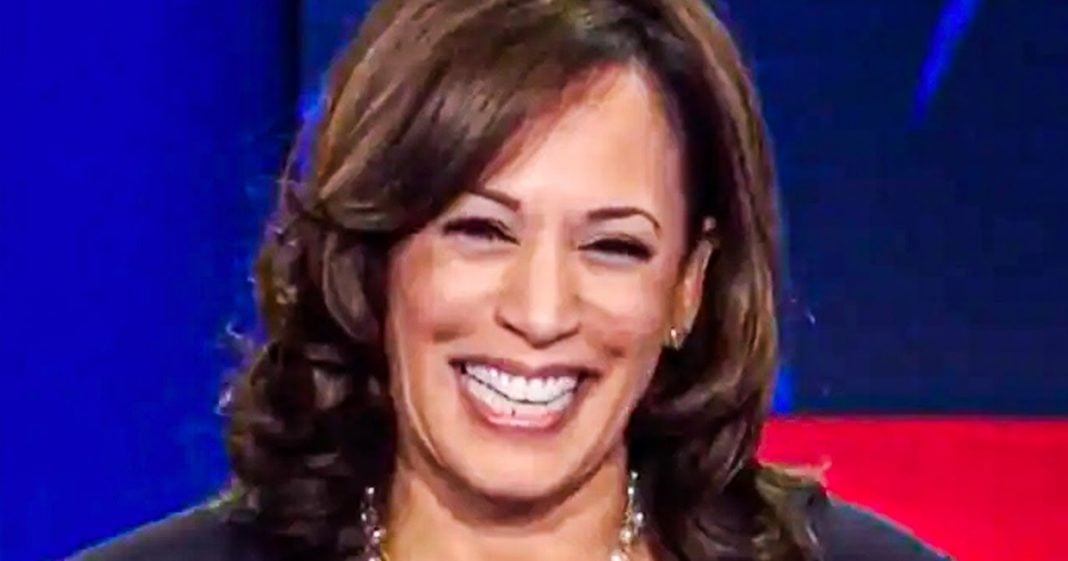 Vice President-elect Kamala Harris said this week that Joe Biden will NOT be the one to decide whether or not to prosecute the outgoing Trump administration, and that the Department of Justice will be the ones to make that consideration. Obviously Harris can’t outright say that investigations will take place, but the fact that she didn’t shoot down that possibility to leave room for hope. Ring of Fire’s Farron Cousins discusses this.

Let’s all be 100%, very real honest with each other for just a moment. Most of us are sincerely hoping that Donald Trump gets prosecuted for something. Once he leaves office. And to be honest, there’s a good chance that that’s going to happen. We do have the investigations taking place in New York. Donald Trump is no longer going to be able to hide his financial information from them. We have the, uh, uh, defamation lawsuits. We’ve got a bunch of other law suits out there, a bunch of other investigations, uh, that are reported to start, uh, from smaller agencies. Once he leaves office a bunch of lawsuits waiting to be filed. So, yeah, um, something’s going to happen to the guy, but this week, vice president elect Kamala Harris address this issue. She was asked point blank of there going to be investigations, you know, is the DOJ going to go after they’re going to prosecute Donald Trump for, you know, what he has done.

And Harris give a very diplomatic answer. And she said, that’s not going to be up to Joe Biden to decide that’s going to be up to the department of justice. If they think they see something there, then that’s, that’s on them. We are not going to direct them to do this. And at first I was not happy with this response and to be honest, part of me still isn’t, but I do understand her having to react diplomatically, uh, to this question. And we’re coming off an administration where the department of justice was absolutely weaponized to go after political enemies. And we certainly don’t want to see that. But I think at this point, we can all agree. Most of us, as long as you don’t, I own a mag, a hat. You’re probably going to agree the man’s committed crimes, but we know this. He was in the Mueller report. We have at least 10 different instances of obstruction of justice. So, okay. That’s not necessarily going after your political enemies, that’s going after a dude that, you know, committed a crime. So here’s the way I’m choosing to look at it at the moment. And that is she didn’t shut the door to prosecutions.

When Obama came into office and we, we knew everything we knew about the Bush, administration’s torture, you know, violating international treaties, violating us law, violating the militaries code to actively engage in torture of detainees. That was prosecutable. Okay. Barack Obama appointed corporate lawyer, Eric Holder to run the department of justice. And they announced that we as a country, we’re going to look forward instead of backwards, we will not be prosecuting any of these individuals. And those are real crimes. Those are crimes worse than what Donald Trump has done. Let’s be honest. They deserved to be prosecuted. Possibly. If we had done that, maybe we wouldn’t have ended up with Trump. I don’t know. Maybe Biden learned that lesson. Hopefully whoever he appoints to run the department of justice, hopefully the not going to be a corporate lawyer, but hopefully they will also understand that too.

The investigations have been done. You know, you have that Mueller report, you’re going to have access to the unredacted Mueller report. You know, what’s in there, you can do it. It’s okay. And you should, for the sake of this country, you should, don’t tell us to look forward and not backward. We saw what happens when you make that mistake. We saw what happens when criminals go on punished criminals with power, go on punished. They’ll just get more powerful as time goes on. So let’s put an end to that. Hopefully Harris was only being diplomatic and hopefully there is a plan to go after these people, because if not, we can expect much worse in 2024.