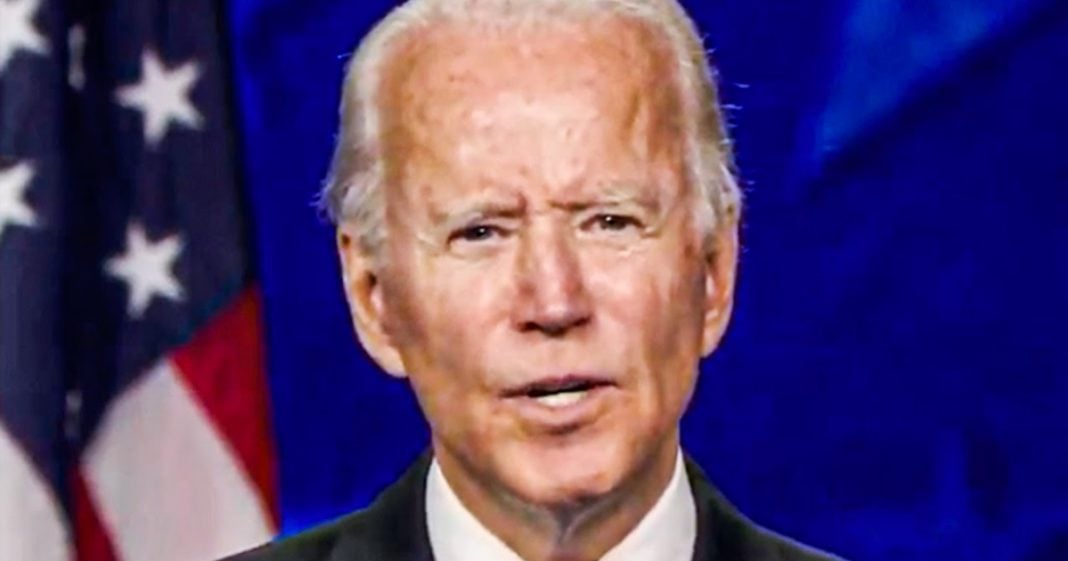 President-elect Joe Biden announced his COVID team this week, and every member is a medical professional. He also announced that he would work with governors and mayors across the country to encourage mask mandates to help slow the spread of the virus. Biden has already emerged as a better leader on this issue than Trump could ever hope to be, as Ring of Fire’s Farron Cousins explains.

Even though Joe Biden is not being given access to the transition materials that he desperately needs to be able to, you know, start formulating plans and coming up with ideas for his administration. We do note one thing that is happening, and this is a very good thing that is happening. Uh, he is already coming up with a plan. He has announced earlier this week, his trans, uh, not as transition team has COVID response team. Every one of them doctors, the people who are going to be running it. So that is huge. Uh, he’s going to have Rick bright on there. Uh, the whistleblower who came forward and said the Trump administration ignored warnings in the early days he’s on there. Joe Biden is taking the pandemic seriously earlier this week. Also, he announced a key facet of his plan, and I love this. He said he is going to make calls directly to governors and ask them to put mask mandates in place.

And if he meets any resistance from these governors, as I’m sure he will, I guarantee you, my governor here in Florida, Ron DeSantis, he will probably hang up the phone. He was a Trump loyalist. He ran his campaign on loving Donald Trump. He’s not going to put a mask mandate in place. So how do you handle that Joe Biden? Believe it or not, Joe Biden has planned for that. I’m sorry. I think that was a different candidate slogan, but either way, Joe Biden has planned for that. Joe Biden says, if that’s the case, I’m going to start calling mayors and I’m going to reach out to individual cities and ask them, beg with them, plead with them to put mask mandates in place. Folks that vaccine may not arrive for a year. It may still be years away, even though Pfizer says, Hey, 90% success rate. Cool. Uh, you’ve been testing it for a couple of weeks though. That may not mean what most people think it means. It’s cool. Your jets on that, but a mask mandate. If you’re wearing a mask and the person over there is wearing a mask, and one of you has the disease, your risk of transmission drops to about 1.5%

Mask mandates would have saved over a hundred thousand American lives so far. So far, we could have done this. We could do this, you know, Making mass more stylish now, more comfortable. Now you can buy the little piece to where, you know, the air comes out at the top, so you can still wear your glasses. You know, we, we have solutions. You know, the, the free market has, has come up with these things to make it more comfortable, to make you more stylish, to make it better. In general, There’s nothing Wrong with putting nationwide mask mandates in place. And to be honest, as I’ve said before, mass should become common. Think about economically speaking. If we made it more socially acceptable to wear masks out in public, what happens to the number of sick days? Americans have to take each year.

It drops whatSwore personal health it improves. This is why you do see this as a, a fairly common sight in tightly packed Asian countries. People wear masks, and it’s not because they’re afraid of what you have. It’s because they know what they could have, and they don’t want to give it to you. The mask Isn’t about you. It’s about protecting everybody else and Joe Biden, if he does make these calls, that’s awesome. It’s even better. If The people he’s talking to on the other end of the phone, listen to him and do what he’s asking. He’s going to have to use the bully pulpit on this. To be honest, he’s going to have to get on TV and call for these kinds of things and explain to people that it’s not a violation of your constitutional right to tell you to wear a mask. He’s going to have to reach out to corporate

Leaders because We know there’s going to be plenty of governors and mayors who are going to say, Nope, not going to do it. So reach out to the corporations. And that’s, that’s a tough thing for me to say, But do it, tell them, listen,And you put a mask mandate in place. And you say that if you don’t have this on your face, you’re not coming in my store And enforce it. He Has other tools at his disposal. Use them Get a handle on this thing, to where, when the vaccine is ready, we can all casually line up for it. Instead of scrambling dig, be the first ones to get it like at the black Friday sale, we could have had a handle on this thing long ago. If Trump had shown an ounce of the leadership that Joe Biden is already starting to show on this issue.