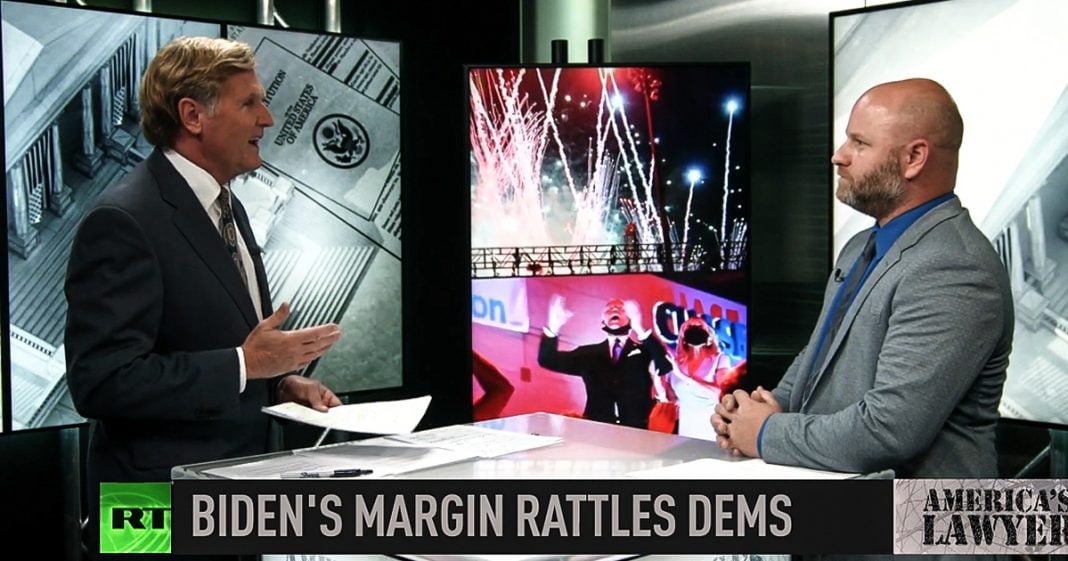 Via America’s Lawyer: The electoral scoreboard has awarded Joe Biden as 2020’s president-elect, but pundits are still rattled by the glaring omission of a “Blue Wave.” Mike Papantonio & Farron Cousins discuss more.

Mike Papantonio:             Democrats are angry about not winning the election by the margins that they thought they would. There was no blue wave. So now they’re trying to find out who’s to blame for that. Farron Cousins with the trial lawyer magazine joins me now. Farron, you know, the reaction is, I don’t know, I guess it’s predictable. It’s kinda like when Podesta, John Podesta blew it for Hillary.

Mike Papantonio:             This wasn’t as bad. They won the president, they won the white house. That was a big accomplishment. So now there’s all this infighting about, you know, you did this wrong, we didn’t pick up the house seats. We’re, you know, thin on the Senate. Give me your take on all this.

Farron Cousins:                  I, I think right now, obviously they do need to look at themselves. This should have been an election that they won in an absolute landslide. We’re in the middle of a pandemic that has been mishandled from the top since day one. We’re in a recession that easily could have been avoided. All of these point to let’s change leadership of this country and for Biden to pull it off in a way that it’s, you know, still being fought in the courts today. Yeah, the democratic party screwed up, but they didn’t make the same mistakes Hillary did, you know, thank goodness they learned a little bit there. Hillary ran on the platform as ha ha look how crazy Trump is, Biden.

Farron Cousins:                  Right. Biden talked policy, but he still wasn’t a strong good comforting, you know, people didn’t look at him and say, I have confidence in this guy.

Mike Papantonio:             I mean, come on. The confidence issues, maybe it will develop as he, as he stays in office, I hope it does. So the issues came down apparently again, you have these two elite sides of the, of the country, you know, California, New York and that elite attitude about the rest of the country is where they think the problem is. This, these elitist celeb types, you know, this is just a continuation of what we’ve always been as Democrats. They ignore rural America and they, they pay all the attention to urban America. And so that’s what the critics say happened here.

Mike Papantonio:             That they, you know, law and order really did work. The stimulus was a big issue that Pelosi blew and, you know, impeachment, everybody thought, oh, that’s going to be the big deal. Impeachment might’ve been because it did, it did increase Trump’s unfavorables. But when you look at the results, it’s nothing like it’s, it’s not a blue wave. It’s more like a blue mud puddle. Right?

Farron Cousins:                  Right. Because the only thing they walked away with was the white house. And you know, you brought up a really good point. Had it not been for those, you know, middle America States, including, you know, Georgia, which is a coast, but it’s a red coast or it used to be. Stacey Abrams helped with get out the vote efforts in the state of Georgia energizing the black community there for two straight years.

Mike Papantonio:             I mean, you can even tell by the appointments that are being made. I mean, did you tell me that John Podesta is actually in consideration on climate change?

Mike Papantonio:             Bring in some new faces. Take AOC and say, you know what, your ideas matter to me and I’m going to put you in the middle of all this. But it’s just this fear, oh my God, they thought we were socialists. That’s the argument on the other side.

Mike Papantonio:             That they thought we were socialists and they, that’s why it went bad for us. No, it went bad for them because of the very things that we talk about. There’s no connection between mom and pop working America and middle America. Now on the, on the coast, great. You know, but I, it’s, it’s a problem they have to solve.