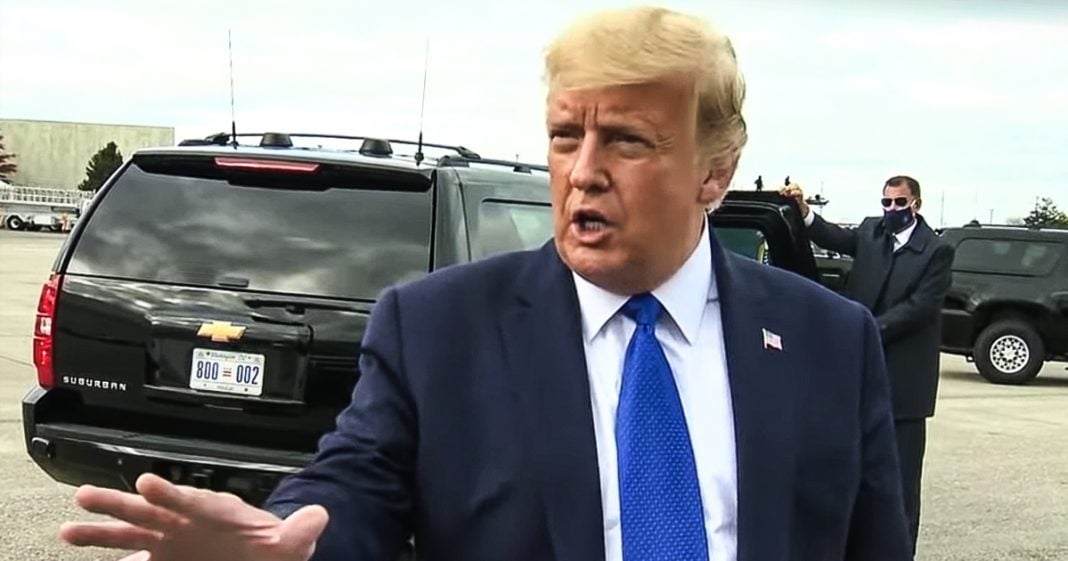 One of Donald Trump’s campaign attorneys was forced to admit in an Arizona court yesterday that they had no evidence of voter fraud, and instead their search had turned up nothing but lies and spam. The judge was not happy with this revelation, as it meant that Trump and his lawyers were wasting everyone’s time. Ring of Fire’s Farron Cousins explains what’s happening.

Yesterday, an attorney for Donald Trump’s campaign had to actually tell a judge in a Maricopa County court That they know They’re filing a lot of fraudulent affidavits with the court with regards to voter fraud. But, uh, You know, some of them, some of them May not be fraudulent. So, You know, you got that going for ya, Which understandably the judge said that he found very, very concerning That that’s what you’re Coming into my court with telling me that you set up a system to try to get people to come forward the whistleblowers, to come out and you telling me it’s filled with lies and spam, but you filed it any way, knowing that plenty of these claims are fraud. Cause that is what the lawyer admitted to Because in the off chance, some of them are correct. You know, then, then maybe, maybe we’ve got a case and that lawyer won’t lose their license over this. Do you understand folks what is happening? And by the way, uh, same thing happened this yesterday obviously was in Maricopa County.

This, so we’re in Arizona yesterday, which was now, now been officially called for Biden happened the day before almost exact same thing happened at a court in Pennsylvania where a different Trump attorney had to go into court and say, listen, you know, we’re doing this in good faith. If there’s fraudulent, affidavit’s in here, then you know, we didn’t do it on purpose. So I asked the guy in, Maricopa’s like, listen, yeah, we did it on purpose, but that’s because there may be some non fraud in there, like in just 24 hours, they actually switched for being like, Hey, if there’s fraud, it’s an accident. And now the argument is, Hey, if there’s truth, that’s pretty bad , right? That is how ridiculous these legal challenges are. We know there is no fraud. Investigations have showed us. There is no fraud, secretaries of state, both democratic and Republicans have told us that there is no instance of fraud, but these lawyers are knowingly filing these lawsuits based on fraudulent and phony information. And they do stand to lose their legal licenses because of it. Why? Because if you lay down with Donald Trump, bad things are gonna Happen. And I Know that the paychecks looked really, really enticing to these lawyers. I’m sure they did, right?

But eventually everything comes due. Karma does sneak back up on you, your entire reputation, your career, what you set out to do with your life, you know, going to school for all those extra years and passing the bar and taking these exams and keeping up with your CLE credits. Suddenly all of that is at risk those years and years of hard work, just because you decided to throw your lot in for a moment with Donald Trump, that is how quickly he has ruined these people’s careers. And I’m not kidding. When I say that a lot of these lawyers do stand to lose their licenses over this. You cannot, as an attorney file, a lawsuit that you know is Based on fraud. And if they knowingly did that, which is what it appears to be, they will be investigated. And if the investigation concludes the same thing that we just determined, it’s likely they will no longer be allowed to practice law. Their livelihoods will be ruined. And I’m not saying that they don’t deserve it. By the way, if you’re the kind of lawyer that would do this, you shouldn’t be practicing law,

But given the desperate nature of Donald Trump, Sure. That’s probably the only kind of lawyer he could find to represent him. The kind that has no integrity, that kind, that has no moral compass. The kind that can look at a stack of fraudulent material and still feel confident enough to walk into a courtroom and tell the judge, Hey judge, I know this is all fraudulent, but uh, maybe it looked through it. Maybe, maybe one or two of them are real. That’s how law works. Right? I were talking about the Lionel huts version of campaign attorneys is what Donald Trump has working with here. And it is ending exactly as you would expect it to. One of today’s video sponsors is privacy. And right now they have a wonderful offer for all of our ring of fire. Viewers, go to privacy.com/r O F sign up for your privacy account and you will receive $5. privacy.com.

Their service is absolutely one of the most vital in an online world today, especially during the pandemic, everyone is encouraged to stay home. So we’re ordering more things online. And so your bank account information is more vulnerable than ever. Privacy gives you security. This is a product that I use all of the time. And here’s why if you have ever had your bank account information stolen, if it’s been part of a data leak, that is a massive headache, trying to get your money back, trying to repair your credit. Privacy helps take away some of that concern. What privacy does is it provides a browser extension, or you can go right into the website or into the app and it can create a virtual bank account or credit card number. It can be a temporary number that only is used one time, or it can be merchant specific, meaning you can create a bank account, a card that only works for one particular website. So if that account happens to get hacked or, or has a massive data, that card number no longer works with any other website, that is how privacy helps protect your bank account information in an increasingly insecure online world. So again, go to privacy.com/rof. You get $5 free just for signing up, or if you don’t want to type it in, just click the link at the top of the video description below.